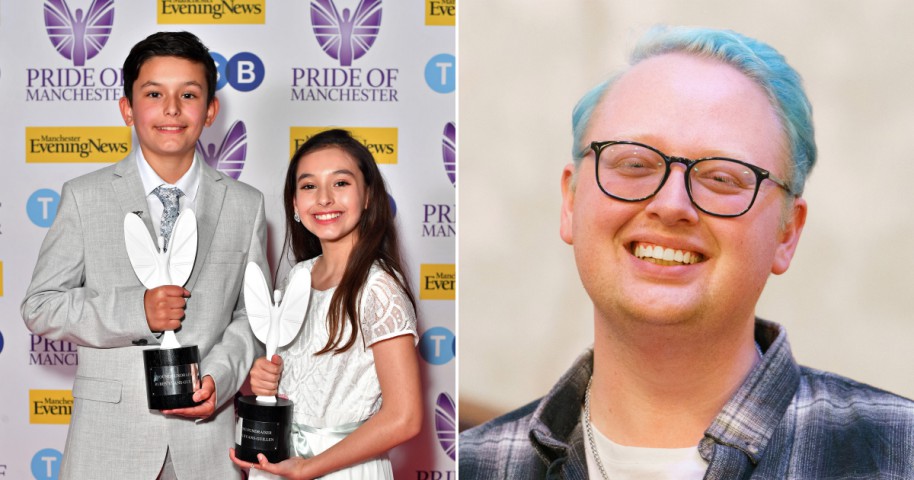 Twins who raised thousands for charity have been honoured by the Queen for their extraordinary efforts.

The 2022 Birthday Honours List highlights amazing achievements from across the UK.

This year, there has been specific focus on sustained public service, the environment and sustainability, and youth engagement.

Elena and Ruben Evans-Guillen, from Warrington in Cheshire, are among those to be included on the list.

They were just six when they took on their first fundraising challenge to run 100km in a year to raise money for a garden at the town’s hospital, where mum Mercedes Guillen Dominguez works.

Since then they have taken on trekking, kayaking and climbing for charity, and carried out 100 acts of kindness in the North West last year.

Finding out they would be receiving an honour from the Queen was a surprise for all the family.

‘I’m really excited to be getting these awards from the Queen and I’m proud of my brother and myself that we have achieved this much.

‘It’s really been hard not to tell my friends.’

While Elena and Ruben are the youngest recipients, this year’s oldest recipient is Angela Redgrave.

The 104-year-old has been recognised for 70 years of services to dance as principal of the Bristol School of Dancing.

The Jubilee Honours List also highlights the contribution made to youth engagement, including that of 22-year-old Alex Griffiths.

He has received a BEM for supporting carers, having been a young carer himself since the age of five.

Since he was nine-years-old, Alex spent five hours a day caring for his mum, nan and grandad by cooking meals, cleaning and changing dressings.

He has been described as routinely ‘putting the needs of others above himself to celebrate human dignity’ and campaign for increased support for young carers.

Those who made impacts throughout the pandemic have also been included.

Bradford-based health worker Rukeya Miah will receive a BEM for her services to maternity and healthcare education throughout the pandemic.

Rukeya, 51, said: ‘It’s just an incredible honour to be doing the job I care and am passionate about in the NHS over the past 30 years, and to serve our community during the pandemic has been an incredible responsibility but one I am justly proud of.’

And in Edinburgh, an MBE has been granted to Douglas Samuel who runs the Spartans Community Football Academy.

During the pandemic he transformed the Academy into a food distribution hub.

The Queen’s Birthday Honours List also awards three Companions of Honour to author Sir Salman Rushdie, for his services to literature; Sir Quentin Blake, for services to his illustration; and Dame Marina Warner, for her services to the humanities.

Sporting stars galore have also been commended, including commentator and former footballer Rio Ferdinand who will receive an OBE for his activism and charity work.

Awards for Parliamentary and political service are headed by Arlene Foster, the former First Minister of Northern Ireland, who receives a damehood.

Meanwhile, Tracey Crouch MP has received a CBE for her work on the Independent Fan Led Review of Football Governance.

Stuart Parker and Samantha Dixon, Conservative and Labour Councillors in Cheshire are also on the list following their work together to open Chester’s Storyhouse Theatre.

North of the border, Scottish businessmen James Walker, of the Walkers Shortbread Ltd headquartered in Moray, and Balmoral Group chairman Jimmy Milne, in Aberdeenshire, both received knighthoods for their business and charitable contributions.

Damehoods have been awarded to Ann Limb, for her role as chair of The Scout Association and the UK Innovation Corridor, and Karen Jones, for services to the business and hospitality sectors.

Also from the arts sector, an MBE is given to Chila Kumari Burman for her uplifting installations during the pandemic.

Among the other recipients include those from organisations such as the Royal British Legion, the Terrence Higgins Trust and the NHS.

Prime Minister Boris Johnson said: ‘This historic Platinum Jubilee is not only a celebration of the monarch but of the qualities she possesses.

‘The honours she confers this week reflect many of those qualities that have been invaluable from all different walks of life and to communities across the UK.’