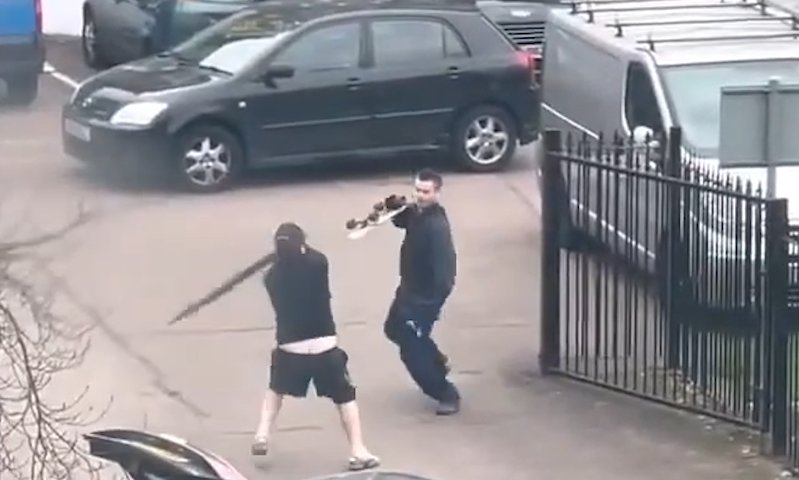 Two men armed with a skateboard and an umbrella traded blows outside a south east London school on Monday.

The bizarre incident was filmed by a stunned onlooker near Riverstone School in Eltham, who watched on as the pair swung their respective weapons at each other.

Thomas Butler, who recorded the footage, told Storyful that the Audi driver had ‘almost hit the skater’, before the footage began and the incident escalated. He was left battered, the photographer added.

As the video begins, the driver, dressed in shorts and wearing a baseball cap, revs aggressively into the school, ignoring no entry signs, before breaking and seeing the skateboarder aim a blow at his car. He then reverses, stops the car and rushes to finds an umbrella in his boot before running towards the other man.

The skater, who appears to be younger and carrying a yellow bag, waits at the gate, before deflecting the umbrella – which his opponent is wielding like a sword – with his left arm, and jabbing the skateboard towards his face with his right.

As they trade blows, the skater lands a punch to the head, knocking the driver’s hat to ground, as he gets the upper hand.

The skateboard and the umbrella fall to the floor as the fight then descends into a more traditional punch up.

It is not clear if the two men know each other, but Mr Butler implied it was a road rage incident.

They grapple for around 30 seconds in total, before the footage fades out.

Mr Butler told Storyful that he stopped filming to go and break up the fight and that the driver was left battered and bloody, before driving away.

Mr Butler and another person discussed calling the Police as the fight unfolded and he said that officers arrived some time later.

A Metropolitan Police spokeswoman told Metro.co.uk: ‘Police were called to Eltham Road, SE12 on Monday, 1 March at approximately 9.18am after a member of the public reported that two men were fighting in the street.

‘The two men had left the area before officers arrived.

‘If anyone witnessed this incident, please contact 101 and quote reference 1416/01MAR.’