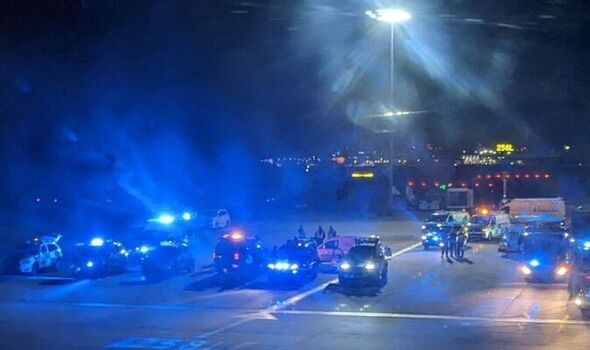 Two commercial passenger planes have collided with the wing tip of one “scraping” into the other while taxiing on the runway. The incident took place at around 8pm this evening. “Martyn John Wulfran” (@thewulfran) wrote: “Major incident at Heathrow Airport involving 2 aircraft.” Fellow Twitter user “Richard” (@TaylorGRichard) replied: “Any details? I think I’m on one of aircraft. Pretty sure we scrapped another plane with our wing tip while taxiing.”

In a separate tweet minutes later, they added: “We have been told that we are going back to the gate due to a technical issue. But that was 15 mins ago and we haven’t moved.”

Another Twitter user said several emergency vehicles had arrived next to a Korean Air plane.

“DWE” (@dwedigital) commented: “A LOT of emergency vehicles next to a @KoreanAir_KE aircraft off the side of the runway.”

A passenger on the Korean Air flight told the Daily Star: “I was watching out the window thinking we were awful close to the tail for a parked plane. And then it looked like we grazed it.

“The captain hasn’t really told us much except we are going back to the gate due to a technical issue. But the last communication was about 45 mins ago.”

He added: “The crew are keeping quiet. They are waiting for the captain – there is no chance this flight is taking off tonight.”

Flight KE908 to the South Korean capital of Seoul was due to leave Heathrow at 7.35pm, but has not yet left the airport.

The passenger added: “We haven’t moved in over an hour. Looks like we might have to get off the plane where we are though.”