LONDON — Britain gave emergency approval on Wednesday to Pfizer’s coronavirus vaccine, leaping ahead of the United States to become the first Western country to allow mass inoculations against a disease that has killed more than 1.4 million people worldwide.

The authorization to use the vaccine developed by Pfizer, a U.S. pharmaceutical giant, and BioNTech, a much smaller German firm, kicked off a vaccination campaign with little precedent in modern medicine, encompassing not only ultracold dry ice and trays of glass vials but also a crusade against anti-vaccine misinformation.

The specter of Britain beating the United States to approval — on a vaccine co-developed by an American company, at that — may intensify pressure on U.S. regulators, who are already under fire from the White House for not moving faster to get doses to people. And it has stirred up a global debate about how to weigh the desperate need for a vaccine with the imperative of assuring people that it is safe.

Russia and China have already approved vaccines without waiting for the results of large-scale efficacy tests, a decision that scientists in some cases have said poses serious risks.

While the go-ahead bodes well for Britain, which broke from the European Union’s regulatory orbit to approve the shot early, it will have no effect on the distribution of the hundreds of millions of doses that other wealthy countries have procured in prepaid contracts.

It also offers little relief to poorer countries that could not afford to buy supplies in advance and may struggle to pay for both the vaccines and the exceptional demands of distributing them.

The Pfizer-BioNTech vaccine must be transported at South Pole-like temperatures, a requirement that is already dictating who will be vaccinated: Nursing-home residents were supposed to be Britain’s top priority under an advisory committee’s plans, but a limit on how many times officials believe the vaccine can be moved before it loses effectiveness means that National Health Service staff members will receive the shots first.

The government has been coy about how quickly it could stock hospitals after approval, but doctors and nurses were preparing to begin vaccinating their colleagues within days. 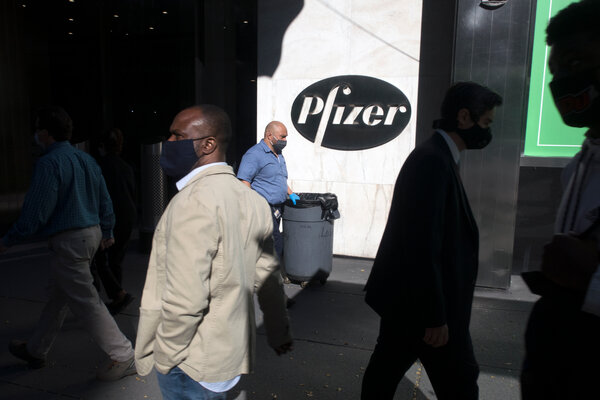 For Britain, which has suffered one of Europe’s highest per capita death tolls from the virus, the decision by its drug regulator testified to a vaccination strategy that has been the most aggressive in the West.

After the government strengthened an old law that allows Britain to step out from under the European Union’s regulatory umbrella in public health emergencies, its Medicines and Healthcare Products Regulatory Agency fast-tracked a review of the vaccine developed by Pfizer, based in New York, and BioNTech, a small German firm.

Britain has pre-ordered 40 million doses of the vaccine, which was 95 percent effective in a late-stage clincal trial. The government has ordered a catalog of different vaccines that are in development — in all, more than five doses for each person in the country.

It has staked its biggest hopes on a vaccine developed by AstraZeneca, a British-Swedish company, and the University of Oxford which is being vetted for emergency approval in Britain. Much of the world could rely on it because it is cheaper and easier to store than Pfizer’s, but its regulatory path forward in the United States is unclear after scientists and industry analysts questioned promising early results.

The chemistry underlying the Pfizer-BioNTech vaccine had never before produced an approved vaccine. It relies on sending genetic instructions through a molecule known as “messenger RNA” to prompt an immune response. BioNTech had made a prophetic bet on the technology and then joined forces with Pfizer, one of the world’s largest drug companies; they ended up delivering stunning results, on a timeline that was unheard-of before this year.

The U.S. Food and Drug Administration plans to decide on emergency authorization for the Pfizer-BioNTech vaccine shortly after a meeting of an advisory panel on Dec. 10. American officials have said vaccinations could begin within 24 hours after approval.

Another American company, Moderna, and the National Institutes of Health, have also developed a vaccine using messenger RNA that has proved extraordinarily effective — 94.1 percent — in large trials. Moderna recently said it would apply to the F.D.A. for emergency approval that, if granted, could result in the first injections being given as early as Dec. 21.

Britain’s power to approve vaccines before the European Union, which has its own drug regulator, applies for now only on an emergency basis. But it will become permanent after Britain consummates its split from the bloc on Dec. 31, making the speed of the Pfizer approval an early sign in the eyes of the government of the flexibility that will be afforded to the country once it untethers itself from the rest of Europe.

Yet, Brexit has also exacted costs, starving Britain’s drug regulator of money it used to draw from contracts with the European Union.

The European Medicines Agency, which regulates vaccines across the European Union, is expected to approve the same vaccine in mid-December, Germany’s health minister said recently, opening the door for vaccinations to begin before the end of the year. While American regulators pore over raw data from vaccine makers to validate their trial results, their counterparts in Britain and elsewhere in Europe lean more heavily on companies’ own analyses.

The British government has also gone directly to its medical regulator, asking it to undertake emergency review of certain coronavirus vaccines, rather than wait for the vaccine makers to do so.

Pfizer has said it expects to be able to produce up to 50 million doses this year, about half of them going to the United States. Since each person needs two doses, a month apart, up to 25 million people worldwide could begin vaccination before 2021.

The approval arrived at a perilous moment in the pandemic in Britain, where the virus has killed 66,000 people, and hundreds more each day. A third of England’s hospital systems were caring for more Covid-19 patients in recent weeks than in the spring. Several intensive care units in central England were struggling to maintain emergency care.

And while a monthlong shutdown of restaurants and pubs has stanched the spread of the virus, it is being replaced by a new system of localized restrictions, with an allowance for Christmastime travel that scientists fear will seed another uptick in infections.

In a clinical trial, the Pfizer-BioNTech vaccine proved especially effective among older adults, who are more vulnerable to developing severe Covid-19 and who do not respond strongly to some types of vaccines. It caused no serious side effects.

With Moderna’s vaccine unlikely to be available in Britain until at least the spring, the government has not formally requested that it undergo an emergency assessment.

As vaccines become widely available, the scientific feat of developing them will give way to the social and political problem of convincing people to take them. In Britain, the source of some of the most virulent modern disinformation about vaccines, just over half of people have said in surveys that they would definitely accept a coronavirus innoculation.

Safety concerns have only been accentuated by the speed with which vaccines have headed toward approval, despite Britain’s regulators saying repeatedly that they were not taking shortcuts.

Beyond those challenges, manufacturers will quickly need to make hundreds of millions — eventually billions — of doses of the vaccine and move them to hospitals, clinics and pharmacies without jeopardizing what is inside.

The vaccine developed by Pfizer and BioNTech makes this effort especially complex. It has to be stored at around minus 70 degrees Celsius (minus 94 Fahrenheit) until shortly before it is injected, requiring transportation in boxes stuffed with dry ice. Moderna’s vaccine needs to be frozen, too, but only at minus 20 Celsius.

Those requirements, along with high costs, could substantially limit the number of countries and people that have access to those vaccines.

For that reason, much of the world had been waiting expectantly for the results from AstraZeneca and Oxford, which will cost only a few dollars per dose and is easy to store for long periods. Britain, too, has staked a considerable part of its vaccine strategy on the AstraZeneca vaccine, buying 100 million doses.