The Foreign Secretary said the government has “considered all of the possibilities” to prevent the virus entering the country from overseas. Several countries around the world, including Australia, Spain, China, South Korea and Taiwan and Japan, have designated quarantine facilities or hotels for international arrivals.

It comes as fears grow over highly-infections mutations of the disease such as the Brazilian and South African variants which are thought to spread much faster.

Mr Raab told Sky’s Sophy Ridge on Sunday: “We will consider all the measures in the round.

“In terms of enforcement, we are going to be strengthening the checks at the border – so when people come in to make sure that they have filled out the passenger location form, that they have got that negative test that they have to vouch for before they get on the flight. 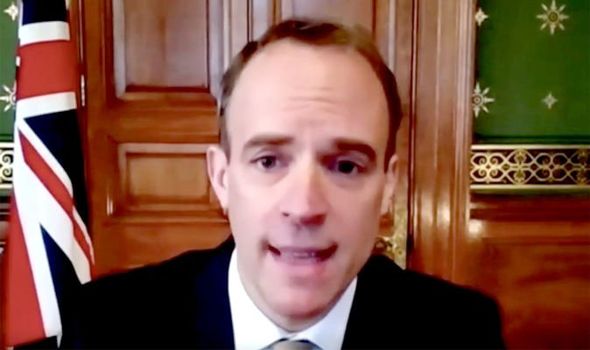 “Also, because the effect of abolishing or suspending the travel corridors is that people go into quarantine and self-isolation for 10 days, we’re making sure that Public Health England checks to make sure people are adhering to those rules.

“As well as changing the rules, we are also making sure that we beef up the capacity to make those checks.”

Mr Raab dismissed claims that the government had been too slow in setting up border measures to prevent the importation of new coronavirus variants.

US Election: Dominic Raab clashes with Sophy Ridge over voting

He told the Andrew Marr show: “I don’t accept that we have been too slow in this – we are broadly the same pace in terms of Canada and Germany.”

Professor John Edmunds, a member of the Government’s Scientific Advisory Group for Emergencies (Sage), said any quarantine policy it should be as tough as possible.

He told Times Radio: “If you’re going to have quarantine then you should probably make it as effective as you possibly can.

“Ours has been rather lax, not just for visitors coming into the UK the vast majority of whom do not have covid but we’ve also been rather lax with our quarantine of individuals who have been in direct contact with a case; indigenous cases.

“We’ve been pretty lax about that.

“We just ask them to stay at home and so I think yes, if we’re going to have quarantine we should try and make it work as best as possible.”