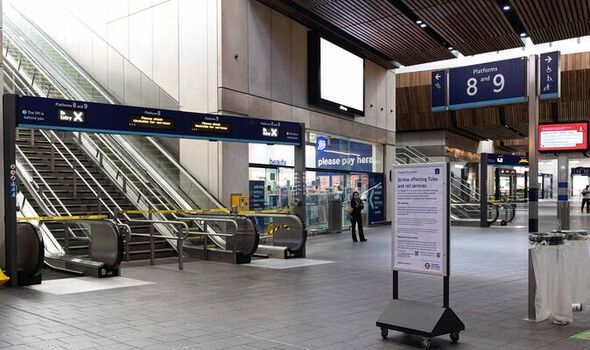 Businesses recovering from the pandemic fear a summer of crippling strikes. Here we assess the impact on other key sectors.

One London bar boss fears a 25 percent plunge in sales. Clive Watson, founder of City Pub Group, said it is “barely worth opening” some sites near train stations, due to the massive impact of industrial action on customer behaviour.

Kate Nicholls, chief executive of UKHospitality warns strikes could cost the sector up to £540million. She said: “Businesses are nowhere near back to pre-Covid levels of volume or revenue yet.

“One in five of our venues are still not back to profitability and one in three have no cash reserves.”

A joint statement from bodies representing theatres, live music venues and museums, said a strike would be “hugely damaging”.

They said: “Our night time economy relies heavily on the rail network with 81 percent of London theatregoers using public transport.”

Michael Kill, chief executive of the Night Time Industries Association, which represents nightclubs, bars and festivals, said the strike announcement had sent a “shockwave throughout the industry”. And more than half of the trains due to serve the Glastonbury Festival have been cancelled because of rail strikes.

Pupils fear for their futures as the industrial action cast doubt over whether they can reach school for A-level and GCSE exams.

Pepe Diiasio, head of Wales High School in Rotherham, said only a “limited number” of pupils are likely to be affected by the strikes overall but that it will be “serious” for those who are.

He advised: “If you’ve got exams this week, have a plan A and plan B.”

One of Scotland’s leading wholesalers, Dunns Food and Drinks, said the strikes were another blow to city centre outlets struggling to recover from the pandemic.

Nathan Rowan, Dunns’ business to consumer director, said: “I wouldn’t be surprised if some close on the days of the strike as staff will be unable to get to work.”

James Hardiman, of the British Retail Consortium, added: “UK footfall is down on pre-pandemic levels and this will slow the progress retailers have made to bring people back.”

Lastly, the rail walkout will likely see thousands of appointments and operations missed.