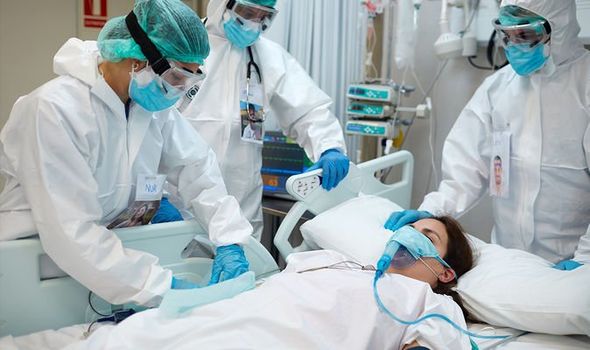 In the week from September 4 to September 11, the UK recorded 1,103 deaths from Covid.

Hospitalisations have also increased, with figures from September 8 holding there are currently 8,098 Covid patients in hospital.

While deaths and hospitalisations are growing, they are still much lower than they were in winter.

However, Boris Johnson is set to unveil the introduction of Covid jab boosters next week to avoid another lockdown.

The Prime Minister will announce his Covid Winter Plan for England on Tuesday, after the Joint Committee on Vaccinations and Immunisation (JCVI) announce their findings on who should receive booster jabs.

A Government source told the BBC the Covid Winter Plan would emphasise how society planned to continue “living with” the virus throughout the winter and promote Covid and flu jabs.

The Times reported mandatory face coverings and working from home will be brought back in if there is a winter surge in infections.

As of writing, 89 percent of the population over the age of 16 have received a first dose of a coronavirus vaccine, while almost 80.8 percent have had both doses

It comes as reports suggested the UK could re-enter lockdown in October to curb hospitalisations.

A senior member of the Government’s Scientific Advisory Group for Emergencies (Sage) warned there are plans for an October “firebreak” lockdown should hospitalisations threaten to overload the NHS.

The scientist stated the UK is about to enter “an extended peak” of infections and hospitalisations, which could see the UK re-enter restrictions during the October school half term.

A Government spokesperson told Express.co.uk: “It is not true that the Government is planning a lockdown or firebreak around the October half term.

“As set out in July, the Government retains contingency plans as part of responsible planning for a range of scenarios, but such measures would only be re-introduced as a last resort to prevent unsustainable pressure on the NHS.”