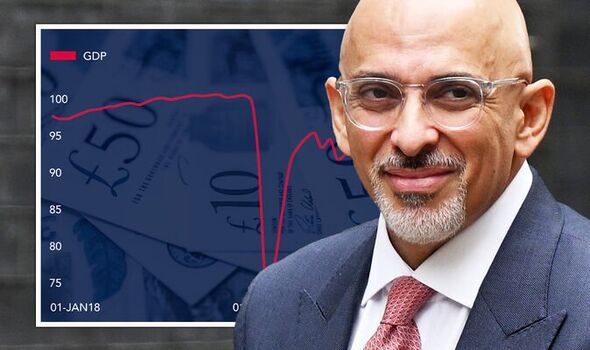 The new data shows a 0.5 percent spike in May, following April’s 0.2 percent decline (revised from a 0.2 percent drop). Over the three months to May, GDP rose 0.4 percent, the ONS said, and monthly GDP is now estimated to be 1.7 percent above its pre-pandemic levels in February 2020. The new Chancellor of the Exchequer, Nadhim Zahawi, was quick to respond to the figures. While welcoming the news, he suggested they were not good enough.

He said: “It’s always great to see the economy growing but I’m not complacent. I know people are concerned so we are continuing to support families and economic growth.

“We’re working alongside the Bank of England to bear down on inflation and I am confident we can create a stronger economy for everyone across the UK.”

ONS director for economic statistics, Darren Morgan, said: “The economy rebounded in May with growth across all main sectors.

“Health was the biggest driver with many more people seeing GPs, despite test and trace and the vaccination programmes winding down.”

He added: “Road hauliers also had a busy month, while travel agencies fared well with pent up demand for summer holidays.

“There was widespread growth across manufacturing after several tough months, while construction also fared well with housebuilding and office refurbishment driving growth.”

The figures were released amid concerns that Britain could be rushing toward recession, with households and businesses gripped by a cost of living crisis.

The risk of a UK recession in the next 12 months is now almost 50-50, according to a Bloomberg survey that highlights the worsening outlook for the economy.

While official estimates currently show the nation is likely to evade two consecutive quarters of contraction, economists are becoming increasingly pessimistic because of a surge in inflation.

The 13 analysts who answered Bloomberg’s survey in July anticipate a 45 percent probability of such a decline in the next year – three times higher than the chance recorded when the survey was conducted at the start of the year.

The figures are reflective of the scale of the economic challenge awaiting the successor to Prime Minister Boris Johnson, who quit last week after a series of scandals lost him the support of his closest allies and triggered a flurry of resignations.