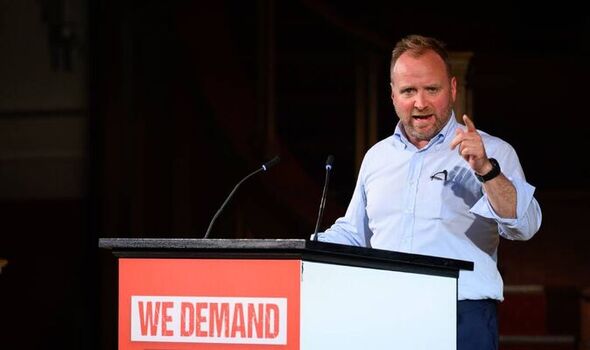 GMB General Secretary Gary Smith said that the UK has been able to slash its official carbon emissions by shifting its manufacturing overseas – with serious consequences for jobs in the UK, economic growth, the environment and national security.

Claiming that this is nothing less than “hypocrisy”, he said: “We have exported our emissions to countries like China who burn the coal to produce the manufactured goods that we need and then we import those goods on diesel-burning barges.

“If you are serious about climate change you need to start bringing jobs home.

“For too long we have exported jobs and imported virtue. Our communities have lost out.

“It is bad for the environment and it makes no economic sense and it’s no good for national security.”

In an interview at the GMB’s London headquarters, the 55-year-old General Secretary:

* Warned it is “absolutely bonkers” for the UK to depend on imported energy;

* Urged the country to get behind hydrogen technology so people won’t have to “rip out their gas boilers”.

Speaking days after the Prime Minister Rishi Sunak announced that the “golden era” of UK-China relations is “over”, he said: “Our obsession with countries like China was ultimately driven by a desire to trade the Chinese currency in the City of London. It wasn’t about the long-term interests of British industrial communities.”

Mr Smith speaks with the pained expression of a union leader who believes Britain squandered opportunities to secure the affordable and reliable energy supplies that Britain’s manufacturers need to compete against international rivals.

He warned: “If we don’t have a plan for energy we are going to be held to ransom by countries across the world. It is absolutely clear that foreign state-owned companies are benefiting from our energy woes.”

The union was founded in 1889 as the Gas Workers and General Labourers Union and Mr Smith is scathing about the vulnerability of the country’s energy supplies.

“I think it is absolutely bonkers to think that an island nation that is going to be dependent on energy imports,” he said. “That energy is invariably coming from pipes or cables which are susceptible as we know to attack.”

Former PM Liz Truss’s bid to end the moratorium on inland fracking in the UK has been abandoned but Mr Smith notes the irony of importing gas that has been extracted elsewhere this way.

“That debate has just been closed off, and there is just a dishonesty in that,” he said. “Because the gas we’re increasingly importing from America will be fracked gas.”

Mr Smith, who joined the union as a 16-year-old gas apprentice and was elected general secretary last year, is not opposed to an expansion of wind energy but wants this to generate new jobs in the manufacturing sector and not just in maintenance.

“What we don’t want is more jobs sweeping up dead birds,” he said.

His great hope is that the UK will harness hydrogen as a clean, affordable and secure energy source.

“If we miss this, then our economy has been holed below the water line by energy costs,” he warned.

Arguing that hydrogen will power both industry and homes, he said: “It uses the skills we’ve got. It uses the infrastructure we’ve got.

“In the long term it will be far cheaper because people will not have to rip out their gas boilers and replace it with electric heating at the costs of tens of thousands of pounds.”

Mr Smith longs for a Britain in which wealth is no longer so keenly concentrated on the City of London, and where people living in traditional industrial communities have new opportunities for excellent jobs.

He went on: “We are facing higher bills for a prolonged period of time but there is an opportunity to create an industrial plan for the country which would see jobs brought back from countries like China, which will benefit local communities, which will create apprenticeships and new jobs and will be good for the environment.

“We can build a new and better Britain – but there needs to be a plan.”