Britons are warned the mild weather which has pushed the mercury into double figures in parts over the past few days will give way to a -18C plunge. Changes in meteorological patterns threaten to drag icy gales in from the east putting swathes of the country back on snow alert. A huge region of high pressure stretching 1,500 miles from Greenland to Norway will strengthen through the coming days driving the icy blast.

Further mild conditions are largely forecast through Monday and Tuesday before the cold sets in mid-week, forecasters warn.

A senior meteorologist for The Weather Company (IBM) said: “Early next week, the high over Iceland is expected to extend to the Nordic region.

“Later next week, the high pressure intensifies and expands over the Nordic region – the Scandinavian block.

“This will result in a colder easterly flow across the British Isles, with temperatures falling widely and some significant wind-chill for England and Wales in particular. 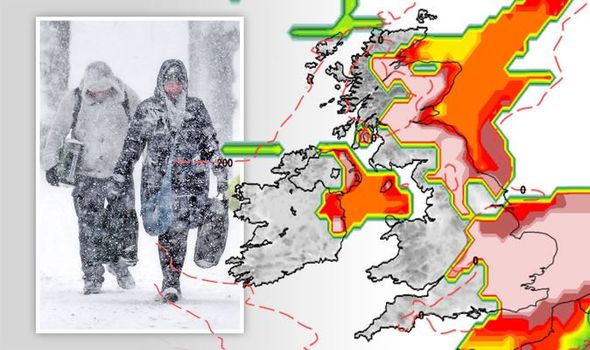 Government meteorologists have issued warnings for ice and more than a foot of snow in Scotland tomorrow, Tuesday and Wednesday.

Those living in the region are urged to brace for travel disruption, power cuts and loss of mobile phone coverage from ‘significant’ wintry downpours.

“Snow is most likely to fall on higher ground, mainly above 200 to 300 metres.

“Significant accumulations of 10 to 20 centimetres are possible, perhaps as much as 40 centimetres [1.25 ft] across the Grampians.”

Public Health England (PHE) has issued a level-3 ‘cold weather action’ health alert across northern and central England. A level-2 alert is in place across the south.

It warns extreme cold weather poses a risk to health in elderly and vulnerable people who are advised to take extra care through the cold snap. 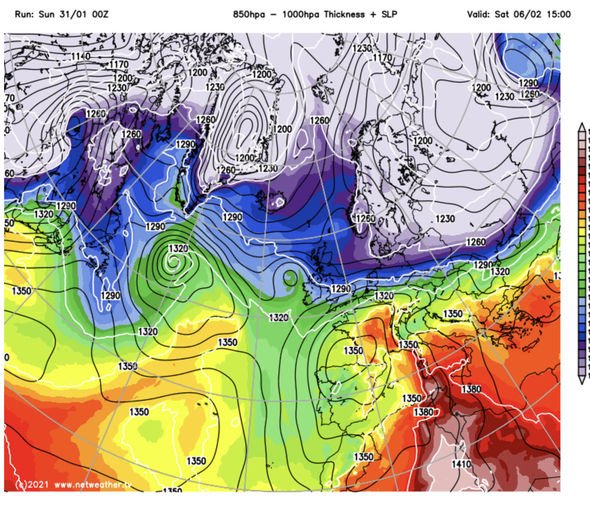 Dr Owen Landeg, principal environmental public health scientist at PHE, said: “As we continue to experience very low temperatures this winter it’s important to remember to check on those who are more vulnerable to cold weather.

“A call or socially distanced doorstep visit to look out for old or frail friends and family, especially if they live alone or with a serious illness, can make all the difference to keeping them well this winter.”

Cold weather will originate from a pool of cold air over Russia and the Baltic states left by a ‘fragmented Polar Vortex’.

The huge body of air circulating over the Arctic–collapsed earlier in the year and shifted southwards over northern and eastern Europe.

A shift to an easterly weather pattern may bring some of these conditions to western Europe and the UK later this month, experts warn.

Jim Dale, meteorologist for British Weather Services, said: “The chances of seeing an easterly during the first part of February is better than it was. 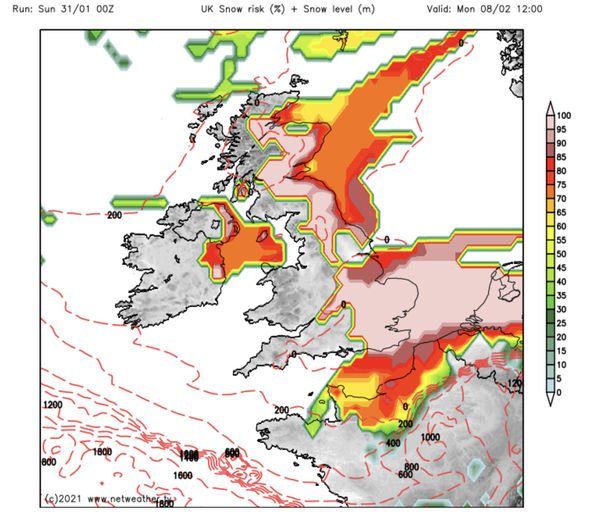 “We are still seeing the potential for this pool of cold air sitting over Russia making, at least in part, its way towards the west and towards the UK.

“We might see some of this ‘beast from the east’ yet, although it may be just the claws stretching westwards towards the UK rather than the full thing.

“I would not be surprised to see some very cold easterlies drift this way, although whether that brings anything in the way of significant snow is still all to play for.”

Exacta Weather forecaster James Madden warned despite predictions for a milder start to February, extreme cold is likely to return.

Freezing blasts interspersed by milder incursions will set the theme for the final month of winter, he added.

He said: “There has been a much-needed reprise for some with higher temperatures as milder weather pushes in off the Atlantic winning over the Siberian conditions.

“However, there is still a chance of seeing widespread frosts and transient snow throughout next month as winter clings on.” 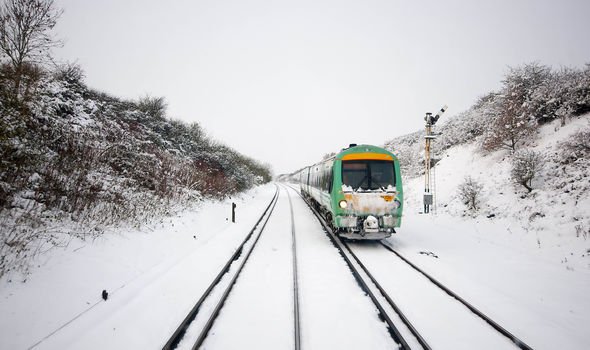 Weather models reveal icy easterly winds making temperatures ‘feel like’ -18C in parts of the UK over the next few days.

Real temperatures will hover between -10C in the north and -1C further south largely through the first 10 days of February.

Snow charts reveal 90-per cent chance of snow across large chunks of Britain by the second week of the month with flurries possible widely through the next eight days.

John Hammond, meteorologist for weathertrending.com said: “There is an emerging signal that a high-pressure area will begin to build from Arctic Scandinavia in our direction.

“Not only will this help to fend off the advance of milder Atlantic weather systems, it should also introduce a drier trend, compared with recent weeks and months.

“The catch is that, while less wet, what does fall from the sky may well have a tendency to be more white and flakey.”