Court to hear arguments on Tuesday on whether PM Boris Johnson ‘acted unlawfully’ when he prorogued Parliament. 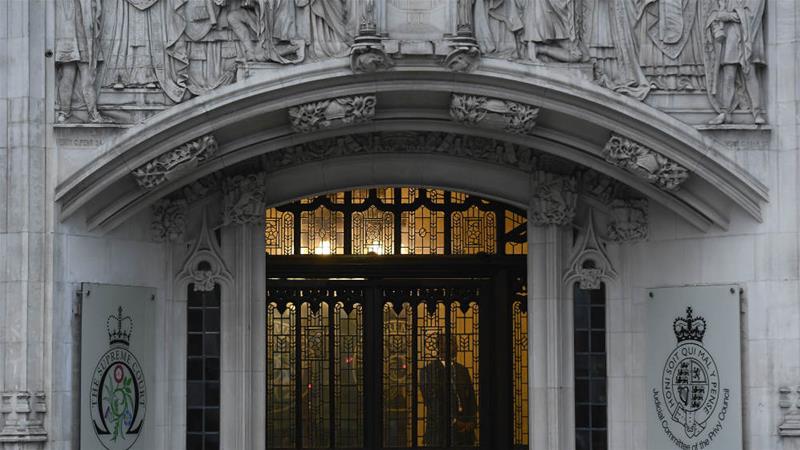 Last week, the prime minister prorogued parliament ahead of his government’s scheduled Queen’s Speech on October 14 – a highly ceremonial occasion in which the British monarch outlines the government’s legislative programme.

But critics have accused the Conservative leader of suspending parliament for five weeks in a bid to force through a “disastrous no-deal” withdrawal from the European Union.

The UK Supreme Court will have the final say on the legality of the prorogation, however, after judges in England and Scotland came to contrasting conclusions.

Last week, more than 70 British parliamentarians sensationally won their legal challenge in Scotland after three appeal judges sitting in Edinburgh declared the suspension unlawful, reversing the decision of an earlier sitting Scottish judge. This followed a verdict in the English High Court that threw out a similar challenge brought by prominent anti-Brexit campaigner Gina Miller.

“The Supreme Court will essentially determine whether it believes the prime minister behaved unlawfully – as the [Scottish appeal court] determined – in which case the most immediate impact will be on the reputation of the premier,” James Mitchell, a public policy professor at The University of Edinburgh, told Al Jazeera.

“Such a ruling would feed the opposition parties’ narrative that has focused on charges of Johnson’s dishonesty… parliament would have to be recalled in the event of such a court judgment.”

Ever since the UK voted to leave the European bloc in the 2016 in-out Brexit referendum – with the “leave” majorities in England and Wales negating the “remain” majorities in Scotland and Northern Ireland – political negotiations have floundered.

Following the resignation of EU-supporting British prime minister David Cameron, who fell on his sword in 2016 after losing the EU referendum he himself had called, his successor Theresa May saw her attempts to negotiate an exit deal repeatedly frustrated, resulting in her resignation earlier this year.

As 11 judges at the UK Supreme Court gear up to consider arguments for and against prorogation, Johnson’s career is on the line. Indeed, before last week’s suspension of parliament, Johnson lost control of the House of Commons to the main opposition and Conservative rebels, who then passed a bill on Monday to block a “no-deal” Brexit by the scheduled EU departure date of October 31.

Despite this, Johnson continues to maintain that Britain will leave the EU by the end of next month, whatever happens. Voters across the UK will watch this week’s Supreme Court hearing with interest.

In Northern Ireland, for instance, the Belfast High Court dismissed a legal challenge against a no-deal Brexit last Thursday brought by three claimants who argued an EU departure without a formal agreement would harm the fragile Northern Irish peace process.

“Brexit has highlighted how little awareness there is of Northern Ireland in England,” said the 41-year-old HR consultant.

She said she feared a hard border between the Irish republic and Northern Ireland in the wake of a no-deal Brexit “will present huge opportunities for terrorists who have never really gone away despite 20 years of peace”.

In Britain – which has seen the unity of its four nations strained by the Brexit fallout – Mitchell said, “If the Supreme Court decides that this case is political and [outside] the judicial process then we are still left with Scotland’s highest court taking a different view from the UK Supreme Court.

“That too has potential significance,” he added. “While it can legitimately be noted that the Supreme Court is ‘not’ an English but a UK court, such a distinction may not be appreciated by the wider [Scottish] public.”