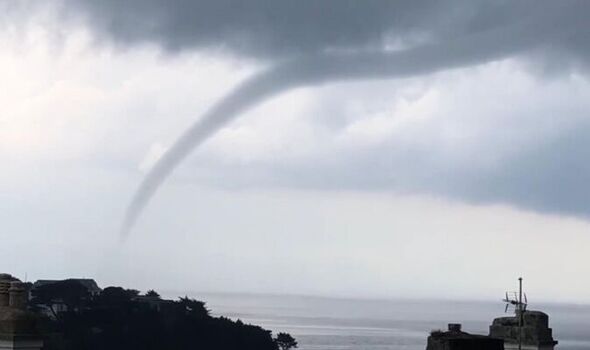 The waterspout was seen over the sea at Polruan this afternoon.

A video taken by a passenger on the Fowey to Mevagissey ferry on Tuesday showed what appeared to be a vicious tornado hurtling across the sea.

The waterspout stormed over the mouth of the Fowey Estuary, near the village of Polruan on the south coast of Cornwall.

Sharing the incredible clip, the ferry service described the sight as “jaw-dropping”.

Tornadic waterspouts can be formed when a tornado forms over water during severe thunderstorms.

One Twitter user said they had a “heart in mouth moment” when they saw the waterspout coming towards them while out in their boat.

It comes as roads in Cornwall and Devon flooded in the early hours of this morning.

Heavy rain and thunderstorms are set to hit parts of the UK for the second day running.

The Met Office has issued several thunderstorm warnings for across the UK until the end of Wednesday, with Cornwall being given a yellow warning.

It added that the showers and thunderstorms are set to become “more extensive” this afternoon, and that “heavy downpours may cause flooding and travel disruption.”

Meanwhile, the Environment Agency has put out 19 flood alerts in areas of the Midlands and south-east England.

This follows a heatwave last week which left land parched and sparked fears of a drought in parts of the country.