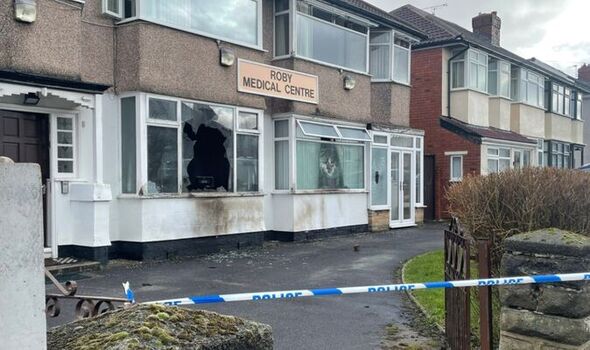 Vandals are believed to have targeted the centre with photos from the scene showing windows smashed in. A cordon is in place with officers stationed outside Roby Medical Centre, on Pilch Lane East, Huyton.

A spokeswoman for Merseyside Police said that at about 2.30am on Thursday officers and Merseyside Fire and Rescue Service were called to a report of a fire at the centre.

She added that the fire was put out and there were no reports of anyone being injured.

The spokeswoman said: “Further enquiries established that damage was caused to a ground floor window of the building and the fire was caused deliberately.”

The Liverpool Echo reports that detectives are currently assessing the damage and carrying out door to door enquiries.

Merseyside Police confirmed that an investigation is underway and officers are currently carrying out CCTV and witness enquiries in the neighbourhood.

Anyone with information about what the incident is asked to contact the force @MerPolCC or to call Crimestoppers anonymously on 0800 555 111 with reference 0068 of 24 February.

Locals told the Liverpool Echo they believe new doctors came to the surgery about six or seven weeks ago.

They also said that the upper floor of the surgery had only just been refurbished by the new occupants.