Large parts of the UK will be hit by heavy rain and strong winds this Halloween weekend, which risk flooding, power cuts and travel delays, the Met Office warns.

Yellow weather warnings for rain and wind are in place across Northern Ireland, Wales, and western parts of England and Scotland from Saturday until 6am on Monday.

Almost all of Britain will suffer rainy conditions this weekend as Storm Aiden moves in from the west, but western and hilly areas will be worst affected, forecasters say.

On Sunday, a second weather front – this time from the remnants of ex-Hurricane Zeta – will bring more rain and gales.

Met Office deputy chief meteorologist Martin Young said: “Given that this is falling on already saturated ground from what has been a wet October, there is an increased risk of flooding in some warnings areas.

“We’re urging people to keep a close eye on the forecast, flood alerts and warnings in their areas.”

Council officials have already urged people to stay away from traditional Halloween celebrations on Saturday amid spiralling coronavirus cases.

They are asking people to respect lockdown measures, the rule of six and not to meet with other households if bans apply in your area.

But those who do choose to go out trick-or-treating will struggle to keep dry. 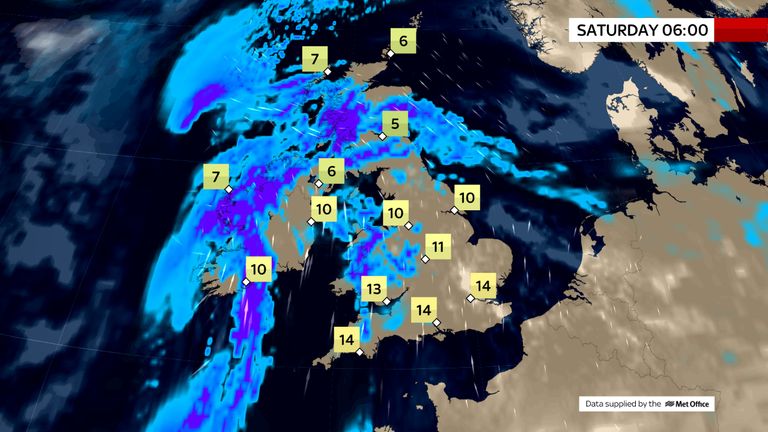 The first weather warning for wind covers all of Northern Ireland, large parts of Wales, the South West and North West of England and the west coast of Scotland.

It will last until 9pm on Saturday, with heavy gusts returning to the Hebrides and far north west of Scotland between midday and 9pm on Sunday.

Rain will also blanket western parts of the UK through Saturday, with 40mm to 60mm expected to fall on higher ground, risking flooded homes, car and rail disruption and power cuts, the Met Office said.

But there will be a break from the wet weather from around 2pm, with some of the rain expected to clear in the afternoon. There will be little respite for western parts on Sunday, however, with the return of a rain warning between 6pm and 6am on Monday.

The Met Office says fast-flowing and deep floodwater is possible, posing a “danger to life”.

Gary White, the duty tactical manager for Natural Resources Wales, said flooding is likely up and down the country over the next few days.

He said: “Our emergency response workers will be at key sites checking defences are in good working order and making sure any drainage grids and screens are clear to reduce the risk to people and their homes.”