Britain will bask in one more day of blistering temperatures – before thunderstorms sweep the nation next week.

Temperatures are expected to reach 35C (95F) in Kent, Sussex and parts of London on Sunday.

But this weekend’s heatwave is set to come to an abrupt end on Monday, with the Met Office issuing a yellow weather warning for thunderstorms for the whole of the UK.

Forecasters say all of England, Scotland, Wales and Northern Ireland are at risk of storms from 12am on Monday to the same time on Thursday.

But they said there is “significant uncertainty in location and timing” of where they will hit. 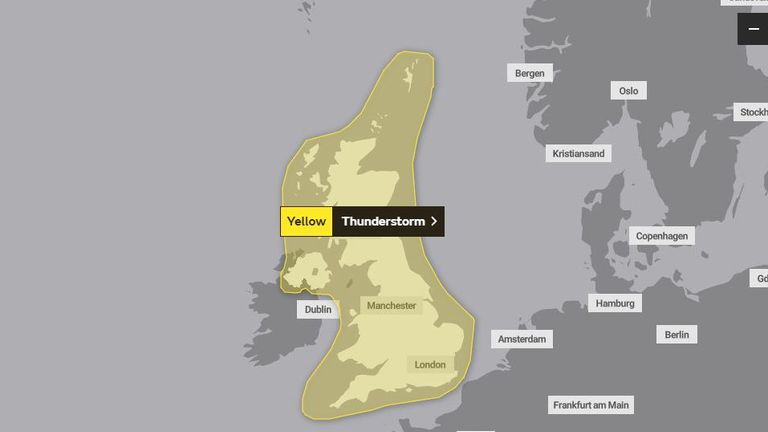 Dan Harris, Met Office deputy chief meteorologist, said “the ingredients are there” for storms to strike, but “it’s just too early to pinpoint the details of exactly where and when thunderstorms will occur”.

The worst affected areas could get as much as 80mm of rain in just a few hours, he added.

And this could see homes and businesses flooded, train services cancelled and roads closed. 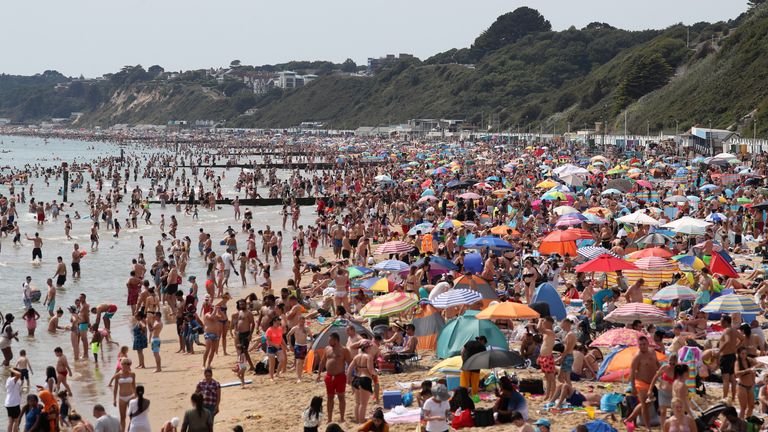 Sky News weather presenter Kirsty McCabe said Sunday will “bring more sunshine once early low cloud in the east clears to the coast, with the sunniest skies across northern Scotland”.

She added: “It will be very hot again in southeast England. A few showers may pop up in England and southeast Scotland, but most places will stay dry.”

In England and Wales, the mercury is expected to reach the high 20Cs and low 30Cs.

Beaches in Brighton, Bournemouth, Blackpool and Margate were packed with people, triggering major concerns over social distancing amid an apparent rise in coronavirus infections.

Friday was the hottest August day in 17 years, with health warnings put in place before the mercury hit 36.4C (97.5F) at Heathrow and Kew Gardens in London.