Storm Bella is forecast to bring yet more strong gales and heavy rain to the UK and Ireland, a day after parts of England saw severe flooding.

Winds reaching up to 70mph are expected in coastal areas on Boxing Day, along with further downpours.

The Met Office has predicted that 15-25mm of rain will fall in Wales and southwest England, reaching 40-60mm over some hills.

There is also expected to be a period of heavy rain affecting western and southern areas. Some areas are already saturated after recent rainy weather and flooding.

On Christmas Day, residents in more than 1,300 homes along the River Great Ouse in Bedfordshire were asked to leave by police after it burst its banks, causing bridges and roads to be flooded.

A local resident in Bedford told Sky News the area often gets flood alerts, but she hasn’t seen the water rise this high over the last two decades.

She said: “People were staying awake all night, obviously not knowing whether it’d come over the road.”

She added that everyone in the community “rallied around” to help curb the flooding by “digging trenches, bringing sandbags” and pulling out trees through the night and into the early hours of the morning. 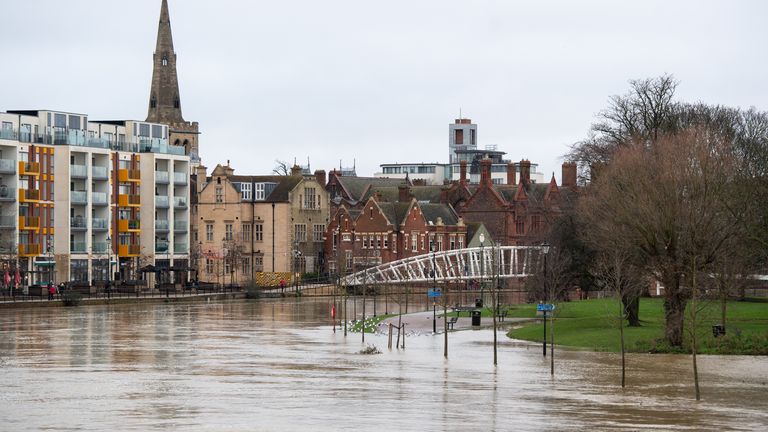 The widespread rainfall which caused the flooding has passed, but the Environment Agency (EA) has warned that a significant flood risk remains – with river levels in Bedfordshire and Cambridgeshire remaining significantly high.

Bedfordshire is one of three areas that have been issued severe flood warnings, meaning there’s danger to life, as more rain is expected on Sunday and Monday.

Cogenhoe Mill caravan site and Billing Aquadrome Holiday Park, which are both on the River Nene in Northamptonshire, are at risk, too. 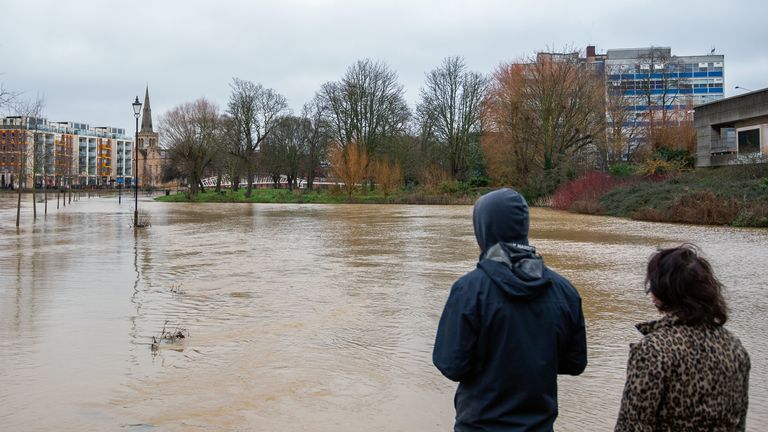 Amber wind warnings have been issued, with the Met Office saying travel could be disrupted for parts of South Wales and across southern England from Saturday night until Sunday morning.

People have been warned that buildings could be damaged in the storm and debris could cause injury or risk to life.

Many areas within Northern Ireland have also been issued yellow warnings of rain and wind from midday on Saturday until the evening, with conditions potentially causing disruption to travel.

Yellow warnings of wind have been issued for the whole of England, Wales and the far south of Scotland from 3pm.

Scotland, Wales and most of the north and southwest of England have been given a yellow warning for rain – many of these areas have already experienced recent flooding.

And Met Eireann has also issued a country-wide status yellow wind and rain warning in Ireland, which is in force until 4am on Sunday. As of Saturday morning, England has 78 flood warnings and 99 flood alerts. Wales has two warnings and five alerts, while seven warnings and 13 warnings have been issued by the Scottish Environment Protection Agency.

Ben Lukey, flood duty manager at the EA, said: “The flood risk will remain in impacted areas through the weekend, with rain on Saturday evening likely to bring the possibility of further flooding to the South West, South East, West Midlands and north of England overnight on Saturday and into Sunday morning.

“Our thoughts are with those affected. Environment Agency teams are working 24/7 alongside the emergency services and local partners to check and operate defences and support those who have been flooded, reduce the risk of further flooding and keep communities safe through the festive period.”

The warnings mark what stands to be a very wet festive period for many, although some were treated to a picturesque white Christmas on the big day, with snowfall recorded in Yorkshire and Suffolk.