Residents in Scotland had to leave their homes on Thursday after torrential rain “washed away” two bridges and a major incident was declared.

There were fears up to 500 properties could be affected by flooding in the Borders town of Hawick, where police declared a major incident around 4pm.

Homes were evacuated but by evening the council ended the alert as levels in the River Teviot, which peaked at 2.9 metres, started to fall.

Schools and a health centre in the town were closed earlier in the day, along with schools in Peebles – which was also hit by flooding as the River Tweed burst its banks. It came during a day of heavy rain and flooding which disrupted travel in southern Scotland and northwest England – with people warned to avoid travelling.

In Dumfries, four adults were rescued from a flooded business.

Pictures on social media showed a Scottish Fire and Rescue Service boat in use in the Whitesands area of the town.

Police said that all those involved were “safe and well”.

Network Rail Scotland said two bridges in Dumfries and Galloway were “washed away”, cancelling trains on the Dumfries to Carlisle line.

“Two road bridges have been washed away on the river Annan, north of the railway,” it tweeted at around 9.30pm.

“We’re unable to allow trains to pass over the Annan Viaduct pending a daylight safety inspection.

“The line between Dumfries and Carlisle will remain closed until further notice.”

A minor landslide that blocked the B725 around six miles from Dumfries also caused disruption. 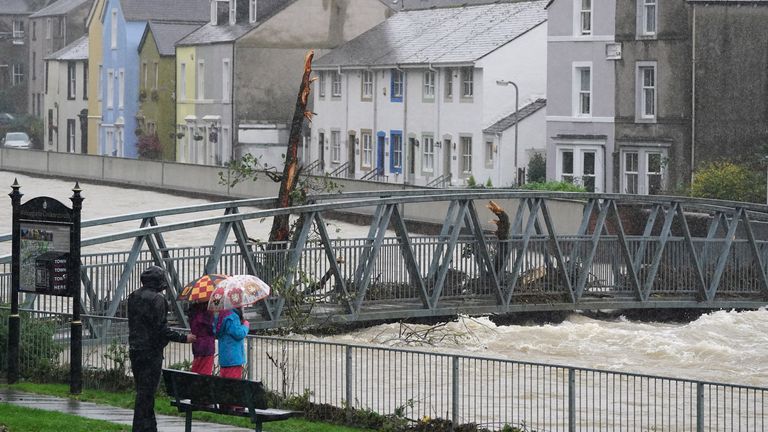 In England, the Met Office said 370mm (14.5 inches) of rain fell at Honister Pass in Cumbria between 1am on Wednesday and 6pm on Thursday, as the Lake District also experienced extremely heavy rain.

Eight Environment Agency flood warnings remained in place in the region on Friday morning, as well as some less severe flood alerts. 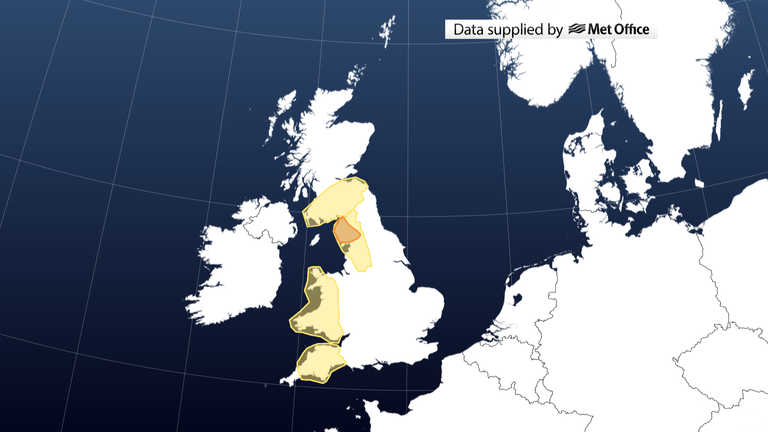 There were also warnings and alerts in southwest England – in Devon and Cornwall, with flashpoints on the River Clyst near Exeter, and parts of the rivers Plym, Tavy, Tamar, Lyd and Torridge.

The Scottish Environment Protection Agency (SEPA) had nine flood warnings in place early on Friday, mostly in the Borders, but also in Rosebank about 18 miles southeast of Glasgow.

The Met Office said the rain could start to ease by Friday afternoon.

Some experts have linked the extreme weather to climate change.

“The heavy rainfall and extensive flooding we have seen in the Lake District and southwest Scotland, including Glasgow in the run up to COP26, is becoming increasingly common with climate change,” said Professor Hayley Fowler from Newcastle University.

“In the UK, our climate models tell us that in 50 years time we can expect these events to be at least 35%, and up to 65%, more intense if we choose to do nothing to reduce our greenhouse gas emissions,” added Professor Fowler.