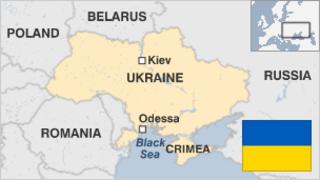 Ukraine gained independence after the collapse of the Soviet Union in 1991 and has since veered between seeking closer integration with Western Europe and being drawn into the orbit of Russia, which sees its interests as threatened by a Western-leaning Ukraine.

Europe’s second largest country, Ukraine is a land of wide, fertile agricultural plains, with large pockets of heavy industry in the east.

While Ukraine and Russia share common historical origins, the west of the country has closer ties with its European neighbours, particularly Poland, and nationalist sentiment is strongest there.

A significant minority of the population uses Russian as its first language, particularly in the cities and the industrialised east.

An uprising against pro-Russian President Viktor Yanukovych in 2014 ushered in a Western-leaning government, but Russia used the opportunity to seize the Crimean peninsula and arm insurgent groups to occupy parts of the industrialised east of Ukraine.

Petro Poroshenko won the presidential election of May 2014 at a time of crisis tht saw the ouster of his predecessor, the loss of Crimea to Russia, and a Moscow-organised insurgency in the east of the country.

A billionaire businessman, Mr Poroshenko won an unprecedented first-round victory in the elections which were held three months after President Viktor Yanukovych was chased from office by crowds following months of street protests against his corruption and pro-Russian policies.

National media have adopted a united patriotic agenda following the Russian annexation of Crimea and armed conflict in the east. Ukraine has banned cable relays of leading Russian TVs; in turn, areas under Russian or separatist control have seen pro-Kiev outlets silenced.

Television dominates the media scene, and private commercial channels are the most watched outlets.

Powerful business groups are influential in the market. Half a dozen major networks, including Inter TV and 1+1, attract the biggest audiences.

As part of reforms, Ukraine launched a public service TV broadcaster in 2015.

Many newspapers publish Ukrainian and Russian-language editions. The press is diverse in terms of formats and political affiliation.

Some key dates in Ukraine’s history:

1986 – A reactor at the Chernobyl nuclear power station explodes, sending a radioactive plume across Europe.

1991 – As the Soviet Union heads towards dissolution, Ukraine declares independence.