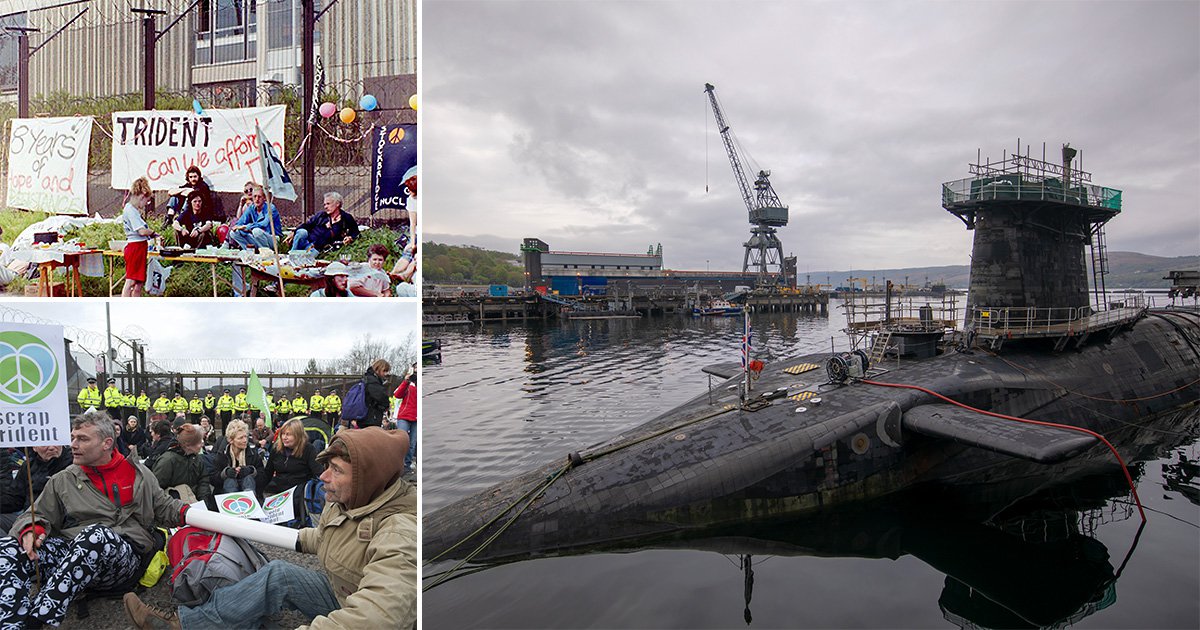 For more than 50 years, Britain has had a continuous nuclear armed patrol at sea.

And for forty of those years, there has been a dedicated peace camp to protest it.

One Trident submarine is always on patrol in Britain’s waters, ready and waiting to be called into potential action.

Three others constantly remain on standby.

Trident is an insurance policy for an uncertain future, and the Ministry of Defence says it exists to ‘deter the most extreme threats to our national security and way of life, which cannot be done by other means’.

Submarines can carry up to 40 nuclear warheads and up to eight operational missiles.

Each warhead is said to be ‘around eight times as destructive’ as the bomb which decimated Hiroshima in 1945, killing over 140,000 civilians.

Trident submarines are housed at HMNB Clyde in Argyll and Bute, an area chosen due to its relatively secluded position near to the deep waters of the Gare Loch and Firth of Clyde.

As the UK’s nuclear capabilities increased in the face of the Cold War, so did the number of anti-nuclear protesters.

Today marks the 40 years since the Faslane Peace Camp was founded by Bobby and Margaret Harrison on June 12, 1982.

Before becoming a politician, he was an active member in the Campaign for Nuclear Disarmament (CND) movement.

Mr O’Hara told Metro.co.uk: ‘So many peace camps like Greenham Common got huge coverage; Greenham almost became the poster camp of the movement.

‘But in many ways the Faslane Peace Camp has been the real permanent conscience of the country.

‘I remember when it first started. I had a bike and cycled out to Faslane from Glasgow with a huge CND poncho on.

‘And I’ve been to numerous protests outside the gates of Faslane since, I’ve never made any secret of my implacable opposition to nuclear weapons.’

He added: ‘The peace camp holds a mirror up to society and asks if this is the society we want to be.

‘Hundreds have come and gone over the years but they’ve never let the camp at Faslane wind up. It’s not an easy life either, especially in winter. You need that commitment.’

There are currently five permanent residents at the Faslane Peace Camp.

They start their day by chopping wood and working to tend to the structural integrity of the small camp which has formed such a big place in the UK’s nuclear debate.

‘It’s not an easy life,’ admits Jon, originally from Yorkshire.

He joined the camp after losing his job in the pandemic, after he was encouraged by a friend to join the community.

‘Our numbers are transient, and we also have people that stay a couple days a week or once a month rather than full time.

‘We always welcome people to come and find out more. I’ve started posting more on our Facebook page just so people have an idea of what life is like at the camp.’

While numbers at the Faslane Peace Camp have been varied, past and present residents have come together this weekend to celebrate its 40th anniversary.

CND members from the south west of England marked the occasion by travelling up the country with a massive rainbow peace sign.

For activist Angie Zelter, the 40th anniversary comes at a time when the debate over nuclear weapons is more prominent than ever.

‘The Ukraine war has made it more obvious than ever that nuclear weapons do not prevent war,’ she said.

‘They just make it more dangerous.’

Angie previously founded the Faslane 365 movement, which saw protesters blockade the nearby naval base every day for a year.

She has also dismantled Trident research facilities, ‘borrowed’ a police boat to investigate war crime preparations and been arrested a hefty 300 times.

Angie added: ‘The bottom line with so-called “deterrence” is the willingness to commit mass murder, an atrocity on a vast scale, a major war crime.’

Nuclear weapons have been a key topic time and time again during the UK’s recent political history – from the Scottish independence referendum to the Brexit debate.

BBC’s recent show Vigil, which follows the death of a sailor aboard a Navy submarine, even led to a resurgence of both sides of the nuclear deterrent debate.

Residents at the Faslane Peace Camp said they had some people ‘reach out’ following the show with questions.

Today, many argue that a nuclear defence is integral in fending off unpredictable political leaders such as Vladimir Putin or Kim Jong-Un.

On a local level, the Trident submarine programme is also responsible for around 30,000 jobs, according to the Institute of Economic Affairs.

The SNP, the Scottish Socialist Party and the Scottish Green Party all oppose the deployment of nuclear weapons.

However, First Minister Nicola Sturgeon has previously said her party would retain Faslane’s naval base for the servicing of conventionally armed and powered naval units.

Dumbarton constituency MSP Jackie Baillie, who previously served as deputy leader of Scottish Labour, has stressed the importance of Trident in boosting the local economy and job opportunities.

During her 20 years as a political representative for the area, protecting families who rely on the base has been a key priority.

Ms Baillie told Metro.co.uk: ‘Trident has an important role to play in defence of the UK and as part of our membership of the NATO alliance.

‘In my local area it is key in providing employment for thousands of local people at HMNB Clyde.

‘The Faslane base is the biggest single site employer in the West of Scotland, providing well paid and highly skilled jobs that contribute significantly to the wellbeing of the local economy.’

And in a recent survey by the Times, some 45% people in Scotland found to be in favour of keeping the submarines at Faslane if the country was to become independent.

At the Faslane Peace Camp, residents have come and gone sporadically over its four decades of existence.

Some saw the Cold War come to a close, others witnessed Scotland’s attempt to become independent – a move that could have hugely shifted the future of Trident – and those at the camp today have watched on in horror as Russia’s war in Ukraine continues.

As the camp reaches its 40th anniversary, activists have acknowledged that their battle is far from over.

‘But it does feel like a turning point,’ said Jon, speaking from the peace camp.

He added: ‘I am really proud to be part of the camp at a time like this.

‘This is a place where a lot of people have come and gone, some people have started their activism career here and gone onto create some really amazing change.

‘I think the Faslane Peace Camp is a beacon of hope on the world platform.’