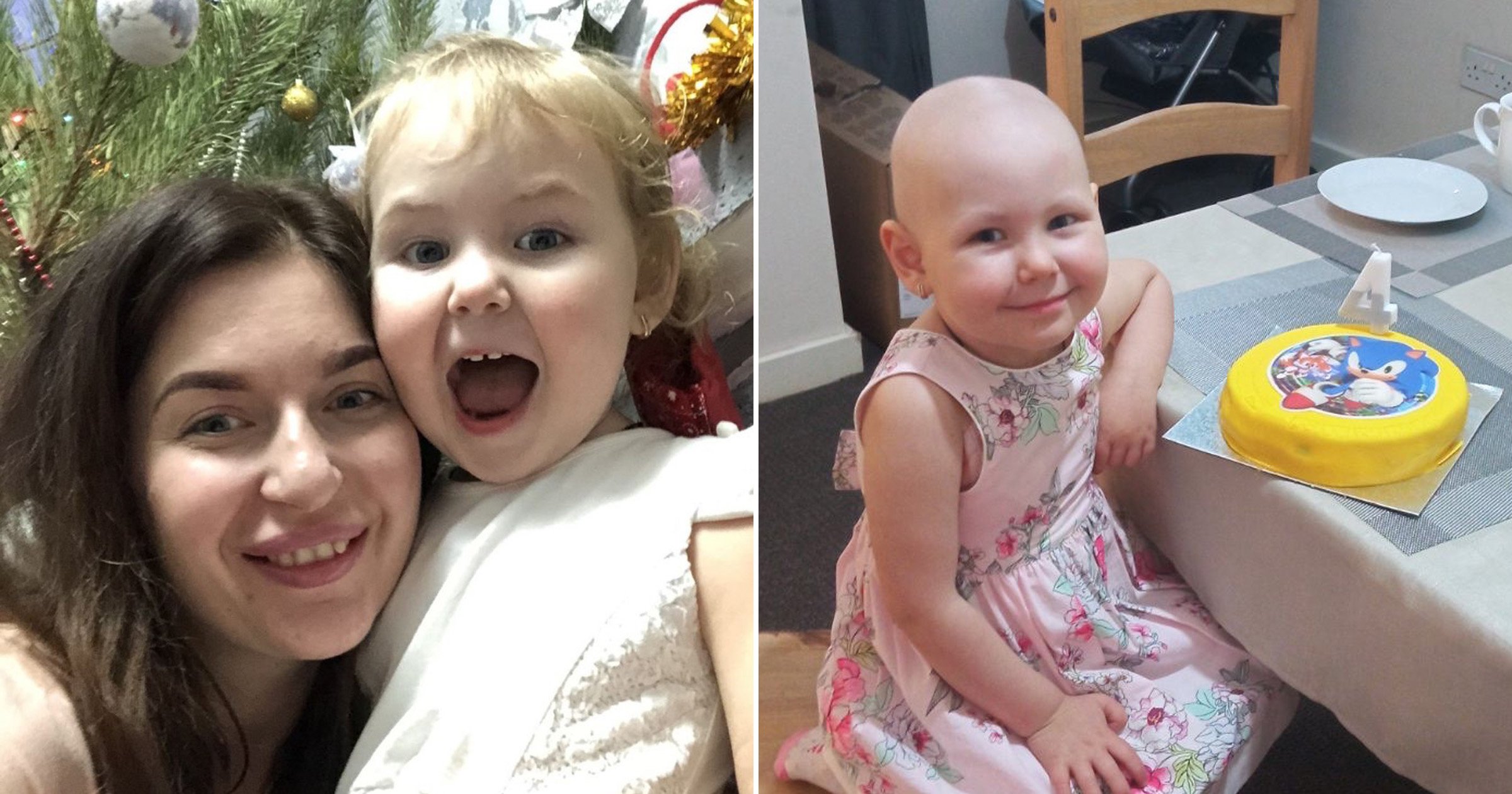 A Ukrainian four-year-old suffering from cancer has made it safely to the UK – but still fears Vladimir Putin’s troops from 2,000 miles away.

Zlata Tkachenko, who has acute leukaemia, spent the first weeks of the war sheltering in a hospital basement as bombs fell overhead in Kharkiv.

Her mum Alina, 31, has thanked ’angel’ NHS workers for ‘helping us through tragedy’ after the family was evacuated to Liverpool, where Zlata was able to celebrate her fourth birthday.

But the ‘little warrior’ still faces an uphill battle, with 18 months of cancer treatment still ahead as she comes to terms with the trauma of the war.

Speaking to Metro.co.uk, Alina said: ‘To this day, when Zlata hears loud noises, she asks me if it’s shooting again. I answer, “no we’re far away now. We’re in the UK, they can’t hurt us here”.

‘There are two wars ongoing for me and my family, but my main war is Zlata’s treatment. This is my battlefield, I have to save her.’

Alina lived a ‘good ordinary family life’ with husband Volodymyr, 36, and Zlata before the devastating news of the little girl’s diagnosis came.

Things took a heartbreaking turn for the worst in February 2022 when Zlata was admitted to the ICU and lay unconscious suffering from seizures.

By February 23, Zlata’s condition had improved and the results of her bone marrow test came back clean – a day Alina describes as ‘one of the happiest of my life’.

But the family’s excitement turned to horror when Russia invaded Ukraine just one day later.

‘We woke up at 5 in the morning to the sound of explosions’, says Alina. ‘I remember seeing fire from the window of the hospital, there was no mistaking it was a war.

‘It was terrifying as it wasn’t possible to go anywhere because Zlata must be constantly under the supervision of doctors.

‘The staff moved mattresses down to the basement and all the sick children and their parents hid together as they continued treatment. There was only one nurse for everyone, she was exhausted.

‘We told the children the explosions were flying balloons so they wouldn’t be scared.’

Alina hoped Putin would back down within a few days – but as the war raged on for two weeks, she realised staying in the basement wasn’t an option.

‘Everyone was afraid to go outside, but our relatives told us we needed to go because this is a war and no one knows what will be next’, the former retail manager said.

‘Our hospital could have been bombed, so we cried, worried, and left. As soon as we stepped out of the basement, there were explosions, shooting everywhere.’

Volodymyr was forced to stay behind and helped with humanitarian aid after Ukraine barred men aged 18-60 from leaving the country.

Meanwhile, Tabletochki, Ukraine’s biggest non-profit organisation helping children with cancer, helped Zlata and Alina get to the train station by ambulance, before they headed to Lviv by rail.

Many children who travelled with them ‘were in a very bad condition’ so they stopped at a medical centre, before going to Poland by bus, and then finally flying to the UK.

How can parents help children impacted by war?

Ane Lemche, a psychologist and child counsellor with Save the Children, said: ‘What is happening in Ukraine can be frightening for both children and adults.

‘Ignoring or avoiding the topic can lead to children feeling lost, alone and more scared, which can affect their health and well-being.

‘It is essential to have open and honest conversations with children to help them process what is happening.

‘One of the ways to do this is by giving children the space to express their feelings and ask you questions.

‘Be mindful of the child’s age as you approach the conversation with them.

‘Young children may not understand what conflict or war means and require an age-appropriate explanation.

‘Be careful not to over-explain the situation or go into too much detail as this can make children unnecessarily anxious.

‘Younger children may be satisfied just by understanding that sometimes countries fight.

‘It is important that children feel supported in the conversation. They should not feel judged or have their concerns dismissed.

‘When children have the chance to have an open and honest conversation about things upsetting them, it can create a sense of relief and safety, and it’s crucial you stay calm.

‘Children often copy the sentiments of their caregivers – if you are uneasy about the situation, chances are your child will be uneasy as well.’

‘I had never flown on a plane before in my life. From the beginning when we flew here to Britain, I was very scared’, Alina said.

‘I missed my husband and I didn’t understand what was happening. Why am I flying here? I was in the fog not seeing the situation clearly. The only thing I understood was that I had to fly with Zlata.’

After arriving in Liverpool back in mid-March, Zlata was admitted to the Alder Hey Children’s Hospital.

Months later, the little girl has completed her third round of chemotherapy and hopes to be given the green light from doctors to go to school in the UK soon.

But it’s a long road ahead for Zlata, who must return to hospital every two weeks for treatment and faces undergoing it until April 2024.

‘Zlata is a warrior and has a fighting nature’, her mum says. ‘Doctors wouldn’t let her go to any amusement parks before but she finally got to go to one for her fourth birthday in September. She loved it, she likes to explore everything and is very noisy.’

More good news came for the family in October when Volodymyr was finally able to join his family after doctors recommended he be with his sick daughter.

‘She missed her dad so much’, Alina said. ‘They had a really special connection and she was always asking “where is my daddy?”

Speaking of their new life together in Liverpool, Alina said: ‘It’s strange as everything is different here and hard as I don’t know English and it’s hard to go anywhere without help.

‘But I adore the people in Britain, very kind and bright people live here and we’re so grateful to be here.

‘The doctors who are treating Zlata are angels, so bright and helpful, always smiling.

‘People are what get you through tragedy and in Britain, we are surrounded by the best.’