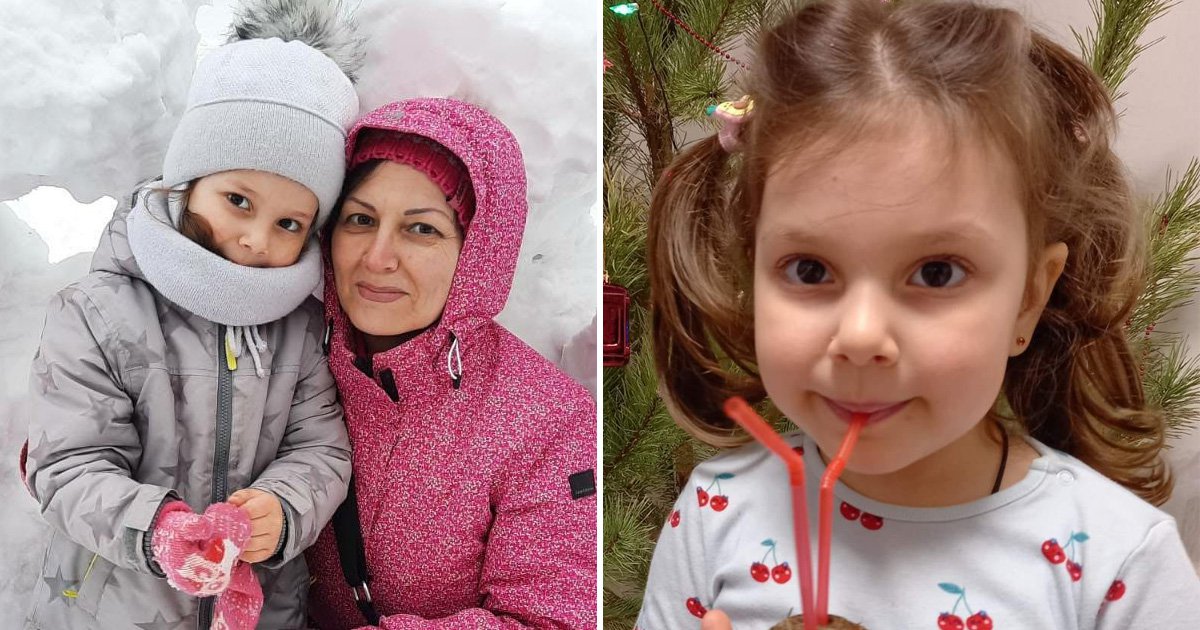 A four-year-old girl is at risk of being sent back to Ukraine, despite having the offer of a safe home in the UK

Alika Zubet is in Poland with her grandmother but the pair have just 11 days until their temporary right to stay there expires.

Her father Dima is unable to leave Kharkiv because men of fighting age are required by law to remain and mum Arena is caring for her own elderly and disabled mother.

The eastern city, which lies within artillery range of the Russian forces, has been the scene of heavy fighting since the start of the war.

After weeks of stalemate, Kremlin troops made some limited progress against Ukrainian soldiers protecting the city last night, according to the Ministry of Defence.

Unable to travel with her, Alika’s parents signed over temporary guardianship to the girl’s grandmother, Tanya, so she could bring her to the safety of the UK.

But under the rules of the Homes for Ukraine sponsorship scheme, ‘unaccompanied children and orphans are not eligible to apply’ and ‘under-18s applying for the scheme must be applying with their parent or legal guardian, or to join them in the UK’.

Alika already has extended family in Staffordshire, including the chair of the local branch of the Association of Ukrainians in Great Britain, Karl Stubbs.

He said red tape ‘means that our government has condemned an innocent four-year-old child to return to the front line in a war zone’.

Mr Stubbs continued: ‘Alika’s extended family are here and we can help to look after her. I am ringing and writing to everyone but I feel like we have run out of options.’

Maggie Babb, a paediatric anaesthetist at the Royal Stoke University Hospital, has offered to sponsor the entire family and put them up in her Newcastle-under-Lyme home.

Dr Babb, who has been communicating with Tanya in Poland using Google Translate to try and find a solution but has hit a brick wall of bureaucracy in the UK

The 53-year-old said: ‘It now seems that because Tanya’s guardianship is temporary not permanent they will not be able to process Alika’s visa – but obviously the family are hoping that they will eventually be able to reunite with her parents.

Help us raise £10k for Kyiv Pride and AKT

To celebrate 50 years of Pride, Metro.co.uk has teamed up with Kyiv Pride to raise money for their important work in Ukraine.

Despite war raging around them, Kyiv Pride continue to help LGBTQ+ people, offering those in need shelter, food and psychological support.

We will be splitting the funds with akt, a charity dedicated to supporting young homeless LGBTQ+ people.

You can donate here

‘And now it looks like Alika will have to go back to Kharkiv so that Tanya can come to the UK and validate her visa.

‘I look at the picture of this little girl that I have never met and I don’t know how people who want to do the right thing can allow this to happen.’

Local MP Aaron Bell said he has ‘spoken to the minister concerned today about the matter and I hope there will be a resolution very soon’.

A government spokesperson said: ‘It is tragic that children have been caught up in Putin’s war.

‘We have a responsibility to keep the children that we welcome to the UK safe and as the public would rightly expect, we have put robust safeguarding processes in place to protect children once they arrive in the country, working closely with councils throughout.

‘Only under-18s who are reuniting with a parent or legal guardian in the UK are currently eligible for Homes for Ukraine, but as we have always said we keep eligibility for all our schemes under review.’