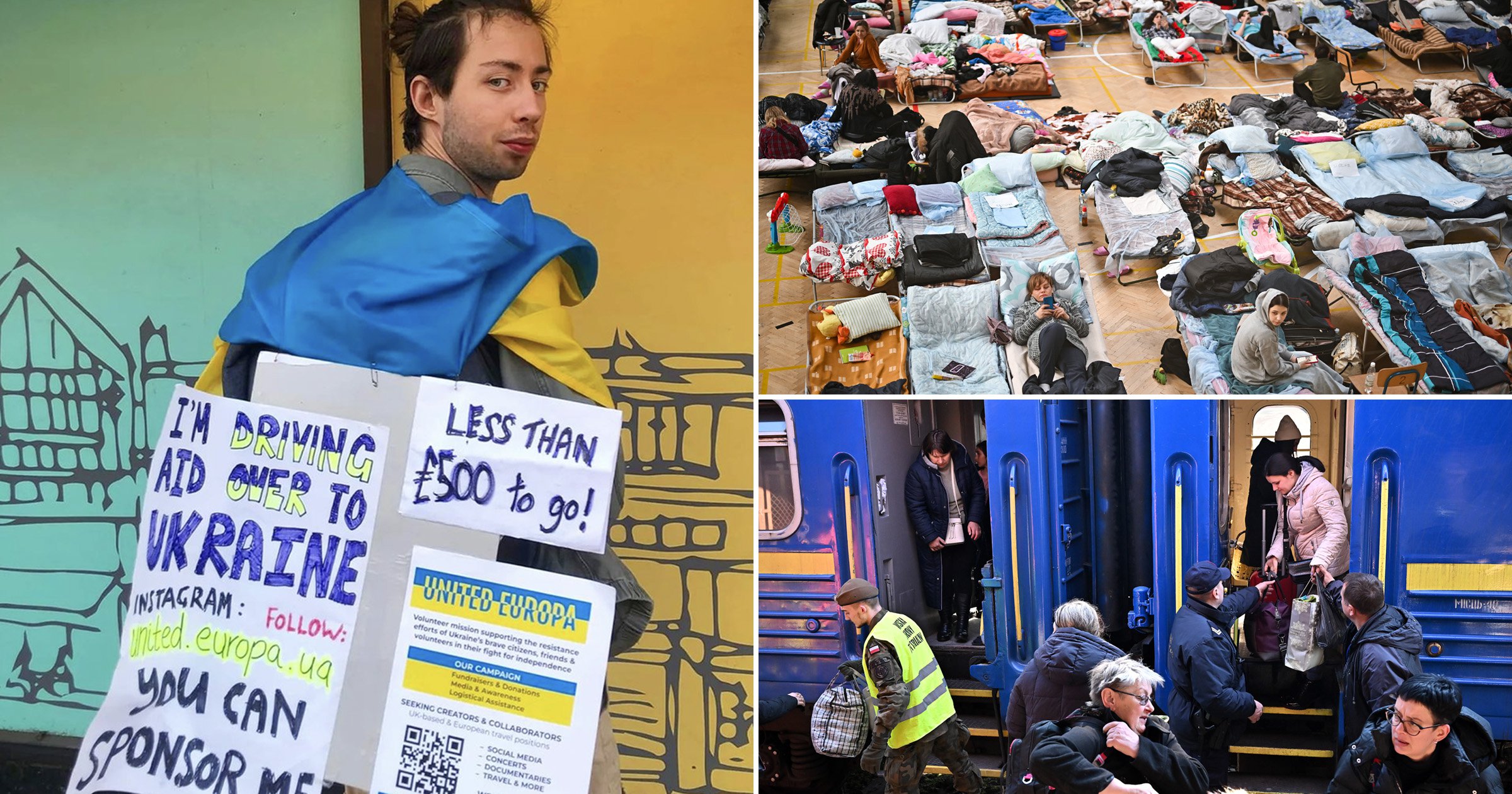 A Ukrainian man living in London is on a mission to save his homeland after ‘a primal call’ urged him to return.

Andrey Kushchinsky has been marching around the capital dressed as a ‘human billboard’ in a last ditch attempt to raise funds for his journey back.

He said he felt the need to travel to the conflict zone and do what he could to help those suffering by delivering aid packages.

The 23-year-old, who was born in Kyiv and brought up in Poltava, will soon be swapping his car for a van to make the 3000-mile round trip.

Ahead of the journey, Andrey has been walking the length and breadth of the capital to encourage donations.

While many Londoners have sympathies, he’s also had a few odd glances and exchanges.

He said: ‘My back is the only advertising I can afford, so I’m just trying to walk around and spread the message of what I’m doing.

‘You certainly meet some interesting characters doing it.

‘Some people didn’t quite understand what I was doing and not everyone was willing to donate – but I just wanted to reach out to people directly.’

On a trek through Soho on St Patrick’s Day, he came across another ‘human billboard’ in the form of an anti-LGBT preacher.

When Andrey jokingly offered the man a go of his Ukraine billboard instead, the preacher ‘did not see the funny side’.

He plans to leave as soon as possible and is putting the last bits and pieces into place with the Ukrainian Embassy.

His journey has grown into a project called ‘United Europa’ as people got in touch with ways they could help.

He said: ‘For the first five days of the conflict I was just weeping and crying every day. I really thought it was the end.

‘But I could hear my country calling, it was a weird primal call.

‘I feel as a Ukrainian really seen and heard by everyone in the world. I knew Ukraine was something special, but it’s just unfortunate that it has come to world attention this way.’

He’s mobilised volunteers across the world – from Norway to Nigeria and everywhere in between – in joining United Eurpopa to plan logistics of donations as well as in hosting fundraising events.

The team has focused on fielding donations for high-price goods that Ukraine is in desperate need for as part of the war effort – such as body armour, thermal imaging cameras and other specialist equipment.

When Andrey arrives in Ukraine he hopes to seek out his childhood best friend who is in the army, and can’t be named due to security reasons.

He added: ‘I was really worried for him when everything began.

‘But he’s okay just now. I asked him what he wants me to bring over, but he only said to bring myself.’

Andrey – both an opera singer and filmmaker in normal times – will make repeated trips back and forth with donations until the United Europa team run out of funding for fuel.

But he doesn’t plan to stop there.

He added: ‘The plan is to follow the trail of the fall-out of the war, Ukraine is such a huge grain producer and there will be countries across the world seriously affected by the crisis.

‘There are several countries in Africa that rely heavily on Ukraine exports so that will cause hunger issues after the war is over.

‘The plan is to set up a humanitarian group to travel and be a voice to these people and tell their stories.’

You can donate to United Europa via this link.