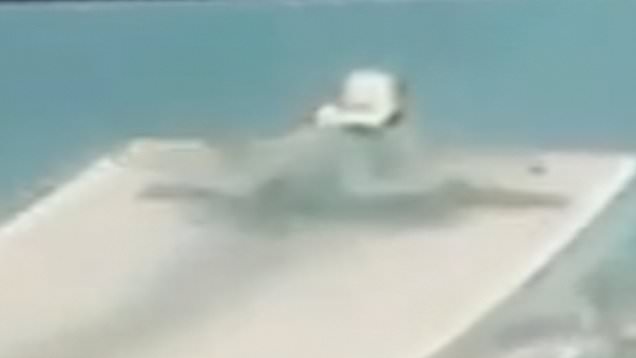 This is the shocking moment a British fighter jet crashes into the Mediterranean sea immediately after take-off.

Leaked footage shows the £92,000,000 aircraft slowing down as it approaches the ramp on HMS Queen Elizabeth.

It then topples over the edge of the Royal Navy aircraft carrier, falling into the water below as the pilot ejects.

The Ministry of Defence said efforts to recover the F-35 stealth jet were ongoing but it was too soon to comment on the video, or say what caused the crash during a routine exercise on November 17.

In the dramatic video, the pilot’s parachute can be seen floating towards the sea as sailors race towards the edge to help.

It has been shared on social media and appears to be a recording of a surveillance camera from the navy flagship.

There is also speculation the F-35 may have crashed due to an engine failure caused by a ‘plastic rain cover’ being sucked into the jet.

Former Royal Navy officer Commander Tom Sharpe told Sky News: ‘Given how close the aircraft ditched to the bow, and the speed of the ship on launch, the likelihood of it hitting the bow of the ship (under the waterline) would be quite high.

‘Warship steel is not that thick so, even despite the weight discrepancy between the two, I would want the compartments near the bow checked immediately.

‘I would then want the hull dived on at the first opportunity, just to be sure.’

Shortly after the incident, an MoD spokesperson confirmed the pilot was safely returned to the ship and an investigation had begun.

In their latest update, the spokesperson added: ‘We are aware of a video circulating online. It is too soon to comment on the potential causes of this incident.

‘The recovery efforts are ongoing and the Defence Accident Investigation Branch will report back their preliminary findings in due course.’

F-35s are the UK’s most advanced and expensive jets. They are fitted with radar-evading stealth technology, can travel at supersonic speeds and land vertically.

The renowned 617 Squadron, known as the ‘Dambusters’, are responsible for flying the jets out of RAF Marham in Norfolk.

Jets have previously taken off from HMS Queen Elizabeth for missions in Iraq and Syria.