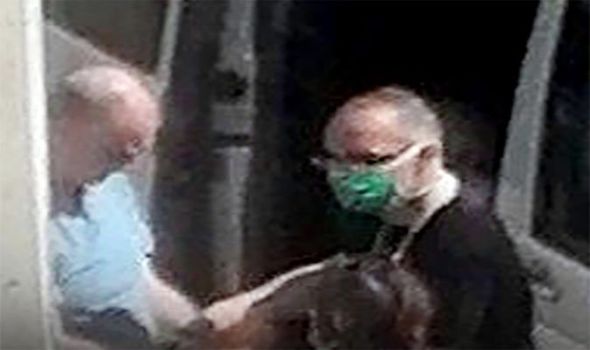 It is alleged Smith used his role as a security guard at the embassy in Berlin to pass sensitive information to Russian spooks.

An eye-witness who saw the arrest, but who does not want to be named, said: “I saw him being taken in handcuffs out from his apartment and into a police car. It was Tuesday afternoon about 3.15pm. You never saw him much but I recognised him, he had little hair and was fat.

“There were two civilian police vans and a police car. It was so unusual, we have not seen anything like that before.”

He is believed to have passed on sensitive documents about British counterterrorism operations.

Neighbours said he left his one bedroom rented flat in Potsdam, near Berlin, early and returned late.

A large Russian flag could be seen hanging in the corner of Smith’s living room yesterday, together with a stack of letters from Ukraine.

His bookshelf was crammed with Russian language and military history books. Other books included the spy novel A Murder Of Quality written by John Le Carre in 1962, and books by conspiracy theorist David Icke. There were also works related to psychology and two by Sigmund Freud.

A Russian military hat sat proudly on top of the bookshelf. Another was placed on the head of a cuddly toy Rottweiler dog. A third was on a leather sofa.

His flat also contained a collection of cuddly toys, while a PlayStation sat on the floor with floral ornaments.

Smith was monitored by security services for months before his arrest.

Thomas Haldenwang, head of Germany’s domestic intelligence service, said that under Vladimir Putin, Russian espionage is as active as it had been during the Cold War.

He added: “Methods are becoming rougher and the means more brutal.”

Dame Cressida Dick, Britain’s most senior police officer, said Scotland Yard has been working on the case for “a number of months”.

She said: “I think it’s a very good example of international co-working. We will continue to work closely with them.

“Somebody has been arrested, suspected of involvement in what they call intelligence agent activity. If this person is charged, we will any trial, wherever that may be. At the moment the Germans are most certainly handling it.”

Asked how concerned people should be for national security, she said: “I’m not the expert, but I can say these things are, thankfully, very rare.”

German prosecutors say the suspect began working for the Russians last November and allegedly passed on material at least once.

The former national security adviser Lord Ricketts said the suspect was unlikely to have had access to highly classified information.

However, he said the case served as a reminder that the Russians continued to deploy traditional espionage methods. He said: “We all think now about the Russians stealing secrets by hacking and providing disinformation by social media and so on.

“It is a reminder that the Russians haven’t given up also on the old-fashioned ways of suborning individuals through money. The Russian intellisupport gence threat to all our countries has grown again.

“It probably dipped at the end of the Cold War but it is absolutely back and so vigilance is essential.

“Of course, since the terrorist threat in 9/11, we’ve needed many hundreds of security guards to keep our embassies safe around the world, and the great majority have given very loyal service over many years.

“So I don’t think we should jump to the conclusion that the system is wrong because this one individual appears to have fallen for an old Russian trap of paying money for information.”