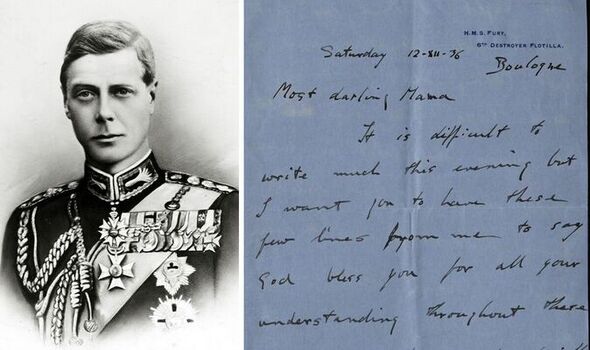 A letter penned by Edward VIII to his mother in the hours after he abdicated the throne has been seen for the first time in decades by Express.co.uk. In it, the former monarch speaks of how he cried when telling his parents of his decision and his torment in coming to terms with the inevitable.

In the emotional letter to his mother,  Mary of Teck, Edward also throws his support behind his younger brother and then future King, George VI – who he refers to as ‘Bertie’ – to whom he “left the crown and the throne as Papa left it, on the same high level it has maintained for so many centuries”.

The incredible note was unearthed by royal expert and investigator Andrew Lownie, the author behind Traitor King: The Scandalous Exile of the Duke and Duchess of Windsor. The letter serves to demonstrate a surprising warmth between the former monarch and his family, something so rarely seen publicly.

Edward’s abdication to marry the divorcee Wallis Simpson in 1936 plunged the nation into one of its biggest-ever constitutional crises and altered the course of history. In bowing out of the role decreed by birth, the crown went to his younger brother, Albert, forcing him to take over from his older sibling just 326 days into his reign. He assumed the title King George VI and served until his death in 1952, whereby his daughter, the late Queen Elizabeth II, took the crown.

Unseen for some 86 years, the letter was uncovered by Mr Lownie from Windsor Castle’s Royal Archives, which holds British monarchy documents from the past 250 years. Among the items hidden in vaults at the castle include “the personal and official correspondence of monarchs from George III (1760-1820) onwards, as well as administrative records of the departments of the Royal Household”.

For Mr Lownie, the recovery of documents such as this unique letter – dated December 11, 1936, from Boulogne in France, and therefore written barely hours after he went into exile after abandoning his post as King that same day – offers an insight into the relationships held between those in the world’s most famous family, as well as the inner workings of Edward’s mind on that fateful day.

Mr Lownie told Express.co.uk the notes “humanise the drama”, likening it to the tributes paid following the Queen’s death in September. He noted how Elizabeth II was “always very serious in public” but “we could see there was actually a lot more going on behind the scenes after she died. This is exactly the same”.

He noted that while in public you would often see the likes of Edward and Mary “put on a brave face”, ultimately what can be felt in the letters show “the real impact on a son who feels he has let down his family, as well as letting down his country”. And for Mary, Mr Lownie added, the reader can sense “a mother who is torn between her loyalties to the crown and the love of her son”.

Edward’s grief is clear throughout the eight-page handwritten letter. The ex-monarch begins by telling his mother he wanted to thank her “for all your understanding throughout these last trying days, and especially for your sweetness to me last night”. The royal described how he and Mary spent time together “being able to bring dear Papa into our talk” before he abdicated the following day.

On his father, King George V, he continued: “We were different in many ways and yet you know how devoted I was to him and I cried when you said he was human. It would have been hard for him to understand what I have done – for you have done so much better and I love you for it and hate to think of the strain that this last month has been on you.

“As I told you again last night, I have known for two years that I could not carry on without Wallis and so my mind was so fairly made and that made my decision easier. It was a big thing to do but I know it be best for all in the end and Bertie will make a fine King and will be able to carry on without any upset and will find that I have left the crown and the throne as Papa left it, on the same high level it has maintained for so many centuries.”

Scroll down to the bottom of this article to read the letter in full and see images of the original handwritten note.

Oh! Mama darling, my heart is so full tonight.

Edward’s intentions to abdicate officially began on November 16, when he invited then-Prime Minister Stanley Baldwin to Buckingham Palace. During a meeting, the then-42-year-old royal expressed his intention to marry Ms Simpson, a twice-divorced American socialite. Marrying a divorcee was deemed morally unacceptable by the Church of England at the time. Edward’s situation was complicated further as he was given the titular role of Head of the Church when he ascended the throne on January 20, 1936.

After days of wrangling over the best way to move forward, Edward expressed his intention to abdicate if he was unable to marry Ms Simpson. And so, after further discussions with the family on the evening of December 11, 1936, Edward, who had reverted back to his role as prince upon his abdication, addressed the public on a now-iconic BBC radio broadcast to explain his decision.

He said: “I have found it impossible to carry the heavy burden of responsibility and to discharge my duties as King as I would wish to do without the help and support of the woman I love.”

With his decision made, Edward noted his excitement to Mary, admitting in the letter: “The only hard thing for me is that I can’t see Wallis until April 27, 1937”, though he continued: “But she and I can take that separation with the knowledge of the great love, happiness and companionship which we are so sure we can give each other. We do want to return to England as soon as is convenient to Bertie and suitable to the country for we know there is no other place worth living in.”

The following year on June 3, Edward – who was then given the title of the Duke of Windsor – married Ms Simpson after her second divorce was finalised. The exiled couple would spend the rest of their life in France until Edward’s death in 1972.

Mr Lownie said the spectacle and letter surrounding it helped “humanise” Edward, and would allow new royal observers a better understanding of the trauma he experienced from making such a bold, and traditionally unheard-of, decision.

“The human drama at the heart of the story does show that. It shows we’re dealing with real people with real human emotions,” he said.

Traitor King: The Scandalous Exile of the Duke and Duchess of Windsor by Andrew Lownie is published by Blink Publishing and is available to buy here.