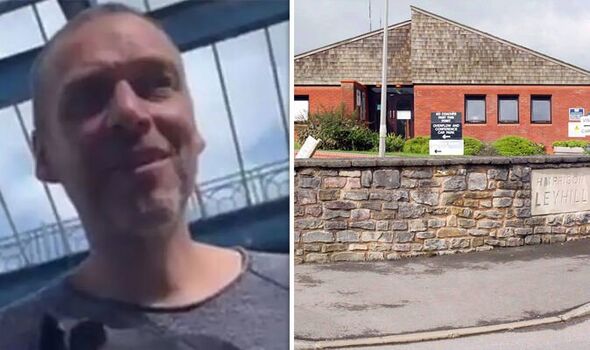 Sean Phipps, 51, failed to return to HMP Leyhill in Tortworth, Gloucestershire, after going on day release in nearby Bristol on Wednesday, June 1. Police have now warned members of the public to be vigilant as Phipps might steal clothes, food or bikes.

He may also use “sob stories” to gain the trust of members of the public, police say.

Officers are urging anyone with information to call 999 immediately, Bristol Live reports.

He has previously used a number of different surnames – including Cawthray, Goldthorpe and Perry.

The rapist is known to have links to the Leicester, Leeds and Nottingham areas and Avon and Somersrt Police are working with other forces nationally to find him.

Detective Inspector Keith Smith said: “Sean Phipps will know he is a wanted man and is no doubt doing all he can to avoid being detected. We’d like to reassure the public we are doing everything we can to trace his movements and arrest him.

“We are asking people to keep lookout for him to help us track him down. Although he has access to some money, we believe it’s more likely he is trying to avoid being spotted by staying in quiet areas, whether it be hiking along back roads or potentially sheltering away from public eye, such as woodland or in an outbuilding.

“He will steal items such as clothing and food to survive, and will walk long distances or steal bicycles to move around on. We also know he has a tendency to use false sob stories to earn sympathy and help from unsuspecting members of the public.”

DI Smith added: “Phipps is approximately 6ft 2ins. When last seen in Bristol city centre on Wednesday, June 1, he was wearing black coat over a blue top, blue jeans and Timberland footwear. He also wore a black Casio watch, blue glasses, and carried a vape pen with him.

“Given the significant amount of work going into finding him, and the media attention now on him, it is possible he may well try to change his appearance.

“Our overriding message to anyone who knows where he is, or where he may have gone, is to contact the police or call Crimestoppers anonymously.

“Phipps’ track record shows he is capable of carrying out dangerous crimes and therefore we urge the public to help us in any way they can so we can return him to prison as soon as possible. Any information, no matter how insignificant it may seem, could make all the difference.”

If you see Phipps, police have said to not approach him and call 999, giving the reference number 5222130002. Alternatively, call 101 if you know where he could be or ring the independent charity Crimestoppers 100 per cent anonymously on 0800 555111 with any other information.