In the week following Queen Elizabeth II’s death, a number of events to mark the solemn occasion took place across the UK, all leading up to the monarch’s state funeral on Monday. The monarch’s death dominated the news cycle not only in the UK but also across the globe. And, for the first time in history, the majority of the ceremonial events were televised, allowing people an insight into the pomp and circumstance the British royals have come to be known for.

Brittani Barger, a US-based royal commentator, has claimed Americans were “mesmerised” by the pomp and pageantry surrounding the monarch’s death.

Ms Barger, who is editor of Royal Central, told Express.co.uk: “Most of us were not alive or were really, really young children when the Queen acceded the throne, so there’s not a lot of people who recall the last accession, state funeral or coronation.

“It’s a very, very long process and Americans are mesmerised by it all. We don’t have a monarchy and we don’t have anything like it. But nobody does it better than the British.”

She continued: “The British do it best with the pomp, the circumstance and the ceremony. No other state events can compare.

“And the Queen was so well-respected here. She was that constant in the world. Presidents come and go but she has always been there.” 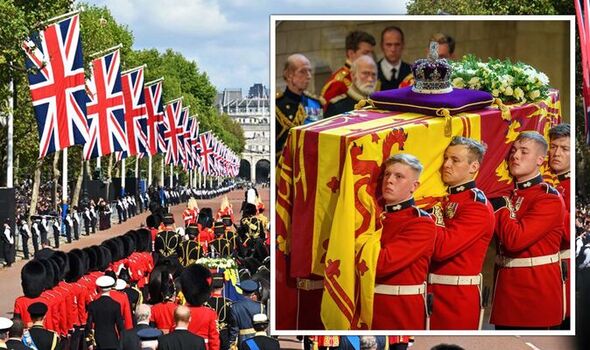 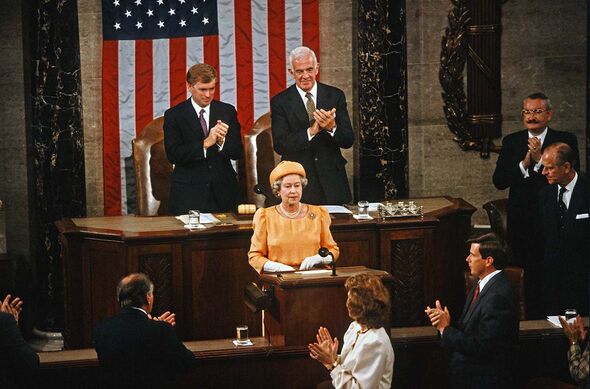 It has been widely said the Queen’s soft power went a long way in cultivating the “special relationship” between the UK and the US. Throughout her reign, the Queen met with 13 US presidents and played a major role in facilitating the trans-Atlantic bond. Their meetings have been described as the “stuff of legends”, from horseback riding with Ronald Reagan at Windsor Castle to watching a baseball game with George H.W. Bush.

In June 2021, President Joe Biden, the 46th President of the United States, became the 13th American President to meet the Queen. Both he and the late monarch attended the G-7 Summit in Cornwall.

Following the Queen’s death, he issued a heartfelt statement, which read: “Her Majesty Queen Elizabeth II was more than a monarch. She defined an era.

“In a world of constant change, she was a steadying presence and a source of comfort and pride for generations of Britons, including many who have never known their country without her. An enduring admiration for Queen Elizabeth II united people across the Commonwealth.

“The seven decades of her history-making reign bore witness to an age of unprecedented human advancement and the forward march of human dignity.” 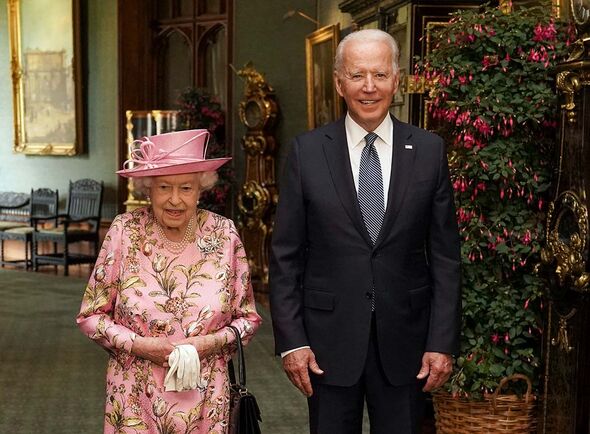 Mr Biden and his wife Jill were the only American delegates who were at the Queen’s state funeral due to space constraints for the enormous event.

However, all five living former presidents — Donald Trump, Barack Obama, George W. Bush, Bill Clinton and Jimmy Carter — have been invited to “a Service of Thanksgiving for the Life of Her Late Majesty Queen Elizabeth II,” at the Washington National Cathedral. The event, which is in collaboration with the British Embassy, will be held on Wednesday. It is set to feature an honour guard by the Queen’s Colour Squadron, a unit of the Royal Air Force.

The cathedral, which has a long and prominent history, has played host to the funerals of Dwight Eisenhower, Mr Reagan, Gerald Ford and Mr Bush, as well as memorial services for the likes of Sir Winston Churchill, the Queen’s first Prime Minister.

Last week, after the death of Her Majesty was confirmed, the cathedral’s bell tolled 96 times in honour of the Queen’s 96 years of life. 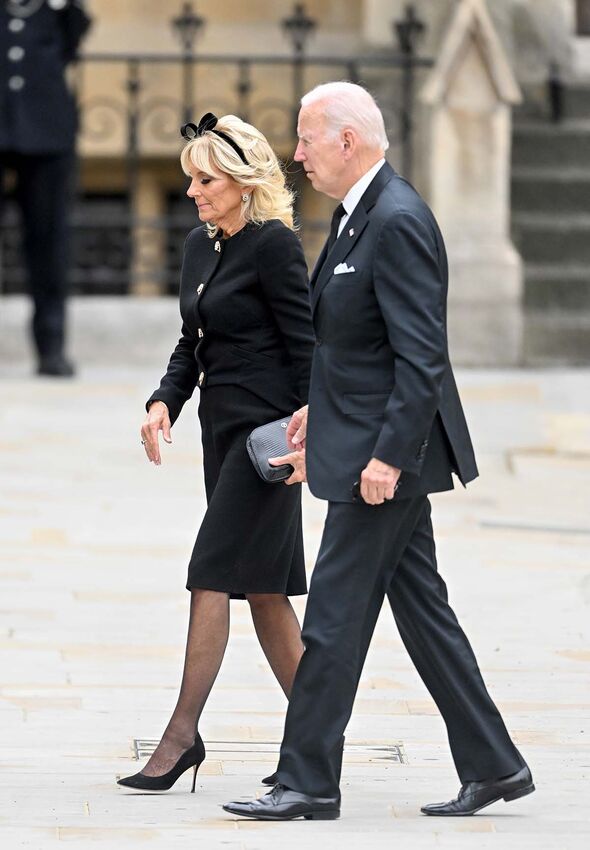 Mr Biden continued: “Queen Elizabeth II was a stateswoman of unmatched dignity and constancy who deepened the bedrock Alliance between the United Kingdom and the United States. She helped make our relationship special.”

When he signed the official condolence book for the Queen, he said the monarch reminded him of his mother, and it was “an honour to meet her”. 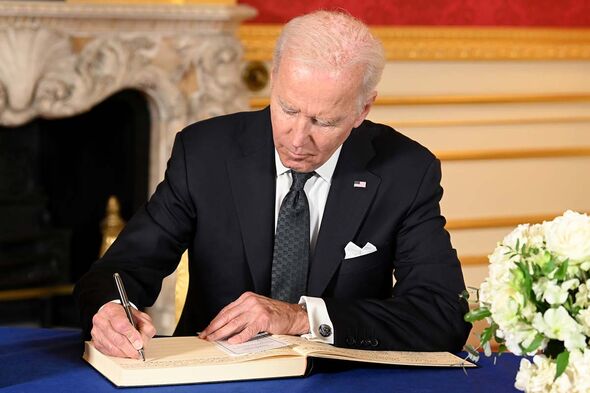 Ms Barger noted the Queen’s prevalence in the US, saying that American news “paused” on the day of her death. She explained: “When Buckingham Palace released the statement saying that doctors were concerned for her health, every single news station paused American news for the day. It was solely focused on the Queen until the breaking news came.

“They covered it every single day in some form. I think most Americans are sad to see her pass.”

Upon Her Majesty’s death, her eldest son King Charles III immediately inherited the throne. It has been well-documented that Charles and his wife Queen Camilla are not as popular as the late monarch was, and according to Ms Barger, this sentiment is mirrored in America.

She said: “Charles, on the other hand, is not as well-respected in the US. There have been a lot of comments, especially about Camilla. Diana is very adored in America. A lot of Americans are not aware that Diana also cheated on Charles, or they are aware and they choose to ignore that fact. 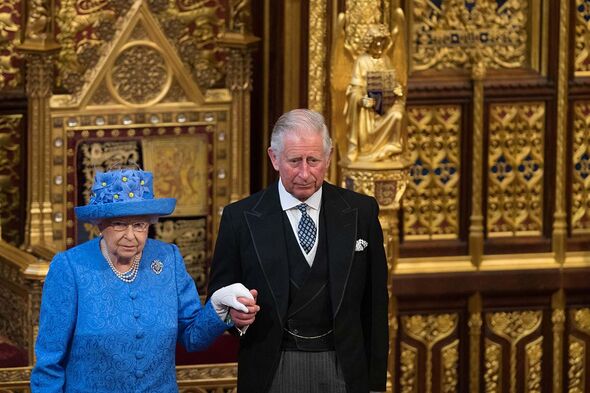 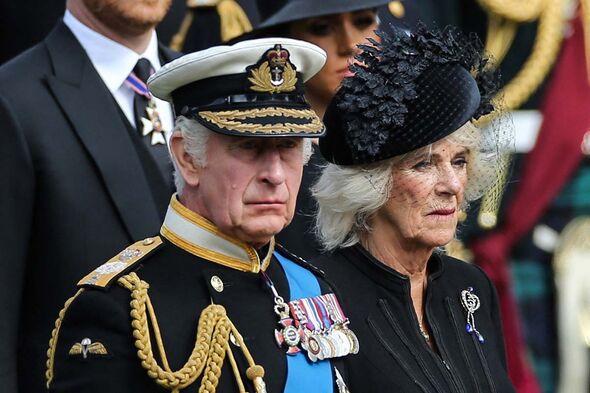 “I think some Americans’ view of the monarchy is going to go down until William takes the throne. William is very well-liked here, but Charles not so much.”

According to the most recent YouGov poll, Queen Elizabeth II was the most popular member of the Royal Family, followed closely by Kate, Princess of Wales and Prince William.

Charles and Camilla ranked at seventh and eighth place, falling behind Princess Anne and her daughter Zara Tindall.

Similarly, a poll conducted in February found that the Queen was the second most popular member of the family, ranking only behind Diana, Princess of Wales.

The monarch and Camilla were placed only above Prince Andrew, who was the least popular British Royal polled. Americans also preferred that William succeeded the Queen rather than Charles.