ROME — The Vatican said on Monday that Pope Francis was in “good general condition” a day after undergoing colon surgery, adding that he was expected to remain in the hospital for seven days, “if no complications arise.”

The pope, 84, was “alert and breathing on his own,” a Vatican spokesman, Matteo Bruni, said in a statement, noting that the operation had lasted three hours.

The Vatican said on Sunday that the procedure had been scheduled — Francis suffers from diverticulitis, a condition that can infect or inflame the colon — but it had made no prior announcement of the visit, and the pope’s unexpected admission to a Rome hospital had come as a surprise.

The operation is the first relatively serious health crisis for the pope, whose eight-year pontificate has been built around his personal style, charisma and expressed desire to reinvigorate the church.

Unlike his predecessors, Francis has never left the Vatican for the cooler papal residence in Castel Gandolfo, near Rome, during the summer. But he normally slows down his schedule in July, suspending his weekly general audiences with the faithful held on Wednesdays, and he does not normally schedule encounters with dignitaries or groups. Some Vatican experts said on Monday that he had probably scheduled the surgery at the beginning of this month because his agenda was clear.

It is the first time that Francis has been admitted to a hospital since becoming pope in 2013. For the most part, his health has not caused concern. In 1957, he had an upper lobe of his lung removed as a result of complications from tuberculosis. And in recent years, his breathing has seemed labored during speeches. He had a cataract removed in 2019. 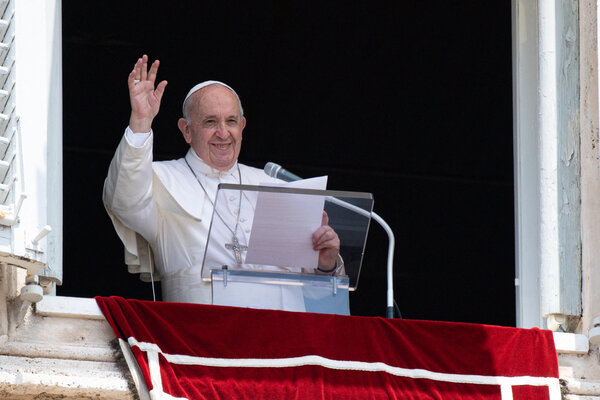 But Francis has maintained an often exhausting schedule during his foreign trips, most recently to Iraq in March. He has, however, clearly slowed — in part because he has sciatica, which causes leg and back pain — and he has missed some engagements. This past year, he missed New Year’s Eve and Day services because of a flare-up of that condition.

The surgery on Sunday was performed by Dr. Sergio Alfieri, who heads the hospital’s complex operational unit for digestive surgery, assisted by nine other doctors, including the pope’s personal physician, Roberto Bernabei. Dr. Bernabei’s predecessor, Dr. Fabrizio Soccorsi, died in January as a result of the coronavirus.

Francis is resting on the 10th floor of one of the wings of the Gemelli Polyclinic, a university hospital in Rome where Pope John Paul II was taken for emergency treatment after being shot in May 1981. John Paul II was repeatedly treated at the hospital for various conditions, to the point that he began to jokingly call it “the third Vatican.” Francis is staying in the same rooms occupied by John Paul II.

The Vatican said late Sunday that Francis had “responded well” to the operation, which took place while the pope was under general anesthesia.

Updates on Pope Francis’ condition are expected to be issued twice a day by the Vatican.

Get-well-soon messages arrived from all over the world, according to Vatican News, the Vatican’s online news site. On Monday, the office of Mario Draghi, the Italian prime minister, said that Mr. Draghi wished the pope a “rapid convalescence and speedy recovery.”