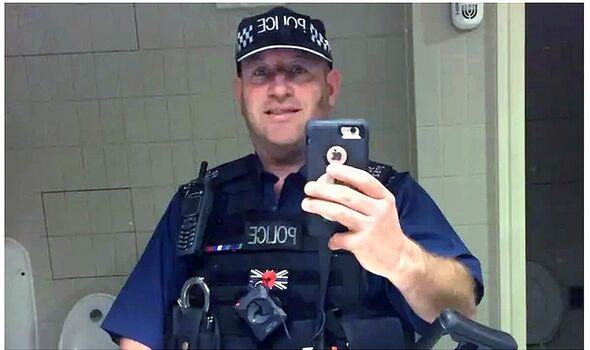 He assured them they could trust him because he was a police officer and even showed them his warrant card as proof. A trained police marksman, he also boasted of the VIPs he had guarded including Boris Johnson when he was prime minister.

Carrick developed relationships with victims before calling them “slaves” and “lazy whores”.

He kept them prisoner in his home in Stevenage, Hertfordshire, forced them to drink his urine, dragged them by their hair and beat them mercilessly with belts.

Victims were kept locked in a tiny cupboard, one was forced to do the housework all day while naked while another was ordered to stay in bed “as we will be having sex all night”.

A coercive bully, Carrick banned them from talking to other men or even their children.

He cut them off from their ­families, controlled what they could eat and how much they could spend. He even put a limit on how long they could sleep.

Carrick, who kept a large snake as a pet, was so “mean and cruel,” his police colleagues called him the “Bastard” or “Bastard Dave.”

Detective Chief Inspector Iain Moor, of Hertfordshire Police, said: “He thrived on humiliating his ­victims and cleverly used his position to intimate there was no point in them trying to seek help because they would never be believed.

“The coercive nature of his offending undermined his victims in the most destructive way.”

Detectives who investigated Carrick were disgusted by his depravity. Detective Chief Inspector Moor said: “Carrick forced his victim into a small ­under-stairs cupboard at his home where they stayed intimidated and humiliated until he chose when they could come out.

“I have seen bigger dog crates. It is unbelievable to think these offences could have been committed by a police officer.” Senior Crown Prosecutor Shilpa Shah said: “Carrick was very persuasive but also very manipulative.

“On a couple of occasions, he introduced himself immediately as a police officer, and said, ‘You could trust me.’ That was at the beginning before they got into any kind of relationship.

“It enabled him to gain the trust of the victims at the beginning.”

His police status gave Carrick the idea he would never be caught and punished.

Ms Shah said: “Most victims feared they would not be believed because he is a police officer.”

During police interviews, Carrick was confident and engaging. He answered questions as if he were chatting with friends and had done nothing wrong. Ms Shah said: “From what I’ve seen he would appear to be a fun-loving, ­charming, charismatic.

“But he was very manipulative, very self-confident, almost to the point of being cocky, and he knew what he was doing.” Carrick joined the Metropolitan Police in August 2001 after serving as a soldier in the Army for a year in the ­late 1990s.

He was posted to Merton in south-west London as a response officer. Four years later, he was transferred to Barnet, north-west London.

In 2009, he joined the Parliamentary and Diplomatic Protection command. His role was to provide an armed policing ­presence around Parliament and at government and diplomatic premises. Scotland Yard stressed he never worked as a police ­bodyguard for VIPs. The investigation by Hertfordshire Police was launched in October 2021 when a woman made an ­allegation of rape.

When he was arrested, Carrick ­dismissed the claim saying: “Not this again!” Publicity about the arrest opened the floodgates and 12 women bravely came forward to reveal their ordeals.

His relentless campaign of ­sex-offending lasted 17 years from 2003 to 2020. Last month, he admitted 43 charges relating to 11 women. Yesterday’s guilty pleas bring the total to 49 charges against 12 victims.

Some of the counts involve ­multiple acts of sexual violence. ­­In total, he has pleaded guilty to 71 serious sex offences.

Crown Prosecution Service ­lawyers reviewed 300 witness statements and 4,000 pages of ­evidence. Ms Shah said: “It was harrowing seeing how victims were ­relentlessly manipulated. They were financially cut off and isolated from their friends and family and repeatedly raped and sexually assaulted.

“Carrick took so much from them both physically and mentally.

“It didn’t matter to Carrick who the victim was – a new girlfriend, a partner, a friend or a stranger – he would still abuse them.”

She paid tribute to the “tremendous courage” of the victims for bringing the rapist to justice.

She added: “I want to thank them for coming forward and ­providing the evidence we needed to secure today’s conviction and end Carrick’s offending.”

He will return to London’s Southwark Crown Court next month for sentencing.