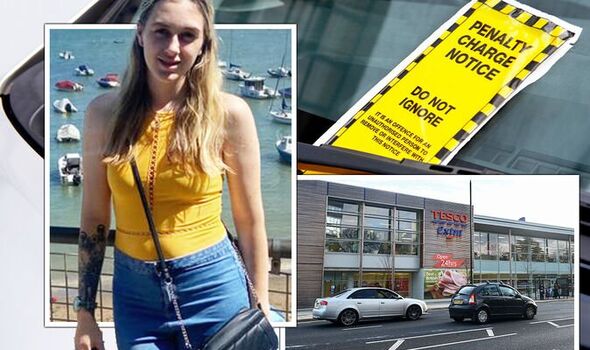 Ellie Brierley, 21, who lives in Greater Manchester, was stuck trying to leave the car park on Sunday, August 7, for ninety minutes due to Manchester United matchday traffic spilling over from nearby Old Trafford. The mum of two boys, who are aged 20 months and nine months, and were in the car with her at the time, said the air conditioning wasn’t working and temperatures inside her car reached 32 degrees.

After finally exiting the car park and making it home, Ellie says she received a £70 car parking fine from Horizon Parking a few days later, reduced to £30 if she paid in 14 days. Ellie, who says she was shopping for just over an hour in Tesco, appealed but it was rejected.

Ellie says her ordeal saw her having to unpack her shopping in the car to pacify her two children and even drove in the wrong direction when she was eventually able to exit due to heavy traffic blocking her way. The mum says the parking time is normally three hours but is reduced to 90 minutes on match days. However, she says she had only just returned from her holiday and wasn’t aware the match was taking place, and says it wasn’t advertised on the LED board.

Unfortunately, Ellie did not keep her receipt as proof of shopping as she had not anticipated getting a fine, but says she collected Tesco Clubcard points on the day and paid for her shopping with a bank card and planned to appeal.

She said: “They are saying I was parked over the time limit but I was not in a space, I was stuck in the exit lane. I am going to appeal again.”

Now, thanks to the Manchester Evening News’ intervention, Ellie received the welcome news that the fine had been cancelled.

A Tesco spokesperson said: “There is a time limit of three hours (and two hours on match days) for the car park of our Stretford Extra store to help make sure everyone is able to find a space. We are always happy to review cases where a customer feels they have received a penalty charge in error and we have now cancelled this PCN.”

Ellie said: “I am grateful that they understood in the end. It is a relief, at the moment with everything that is going on with the cost of living crisis even though they would reduce it to £30, that is still a lot of money – it’s a weekly shop for the children.

“I am so grateful to The Manchester Evening News for raising awareness of parking on match days and helping me to get the fine cancelled.”