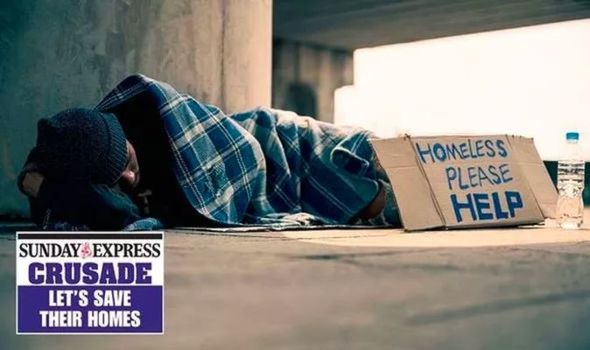 MORE than £300million has been promised to prevent a “tragedy of homelessness”, thanks to a campaign by the Sunday Express and the Big Issue magazine.

The Homelessness Prevention Grant could protect up to 225,000 people at risk of being on the streets due to rent arrears accumulated during the pandemic.

The crisis is being blamed on a “perfect storm” of lockdownrelated job losses, the end of the Government’s furlough scheme, Universal Credit cuts and rising living costs.

These figures come on top of the estimated 270,000 people who are already homeless.

The Big Issue and Sunday Express Let’s Save Their Homes campaign has highlighted that £360million in rent arrears has been run up during Covid.

Figures showed that without action to prevent evictions, the country could see a “homelessness disaster”.

It could ultimately cost the taxpayer more than £2billion in funding for local authorities, support services, the NHS, the criminal justice system and bed and breakfast accommodation.

The one-off £315million cash injection, announced by the Department for Levelling Up, Housing and Communities, is designed to protect tens of thousands of people from eviction.

It will support households in England who are homeless or at risk of losing their home. Councils will use the funding to help them find new accommodation, access support for unexpected evictions and secure temporary housing where needed.

Big Issue founder Lord Bird said: “This announcement is good news and we hope it will prevent many thousands of people and their families from the tragedy of homelessness.

The cash pledge follows a recently announced £66million to provide rough sleepers with accommodation and drug and alcohol treatment services this winter.

There is also a £65million support package for vulnerable renters struggling because of the effects of the pandemic.

The Government has also included an additional £5.8million to help people forced into homelessness by domestic abuse.

It follows the Domestic Abuse Act, which ensures councils give people who find themselves in that situation a “priority need” for housing. Lord Bird warned however that many had already fallen into homelessness or were currently under eviction orders.

He said: “We still need to make sure people do not fall through the Government safety net.

“Across the country we fear there could be thousands of people who have already been evicted or are in the process of being evicted due to arrears that accrued during the pandemic.

“There will be other people who may find it difficult to get access to the grant money at all, or to get money in time. How do we find these people without going round each of the courts where evictions are being ordered?”

The Sunday Express and the Big Issue are calling for an end to nofault evictions and greater investment in jobs and training in sustainable industries for those struggling to keep a roof over their heads.

The grant announcement comes as a report by homelessness charity Shelter showed up to 200,000 children in England currently face being evicted from privately rented homes this winter, due to rising living costs and the removal of coronavirus support measures.

The survey by the charity, released last week, found more than 100,000 families in England have received eviction notices or have fallen behind on their rent payments in recent months.

They now face the threat of losing their homes after a Government ban on evictions was brought to an end in May.

Shelter estimates 55,000 children have already been evicted from their homes over the past three months.

The charity’s chief executive, Polly Neate, said: “Eviction notices have started dropping on doormats and our services are working round the clock to help families who have nowhere else to go.”

Shelter’s figures are based on a YouGov survey of more than 3,600 adults in private rented accommodation, around a third of whom had children. The charity estimated nationwide totals on the basis of up-to-date English Housing Survey data.

The coronavirus crisis has pushed workers across a variety of sectors into precarious circumstances. Periods of extended lockdown have particularly hit those who have casual jobs.

Renters, who are overrepresented in those sectors, have not shared the capital gains enjoyed by homeowners as house prices have surged over the past year.

And withdrawal of the significant Government support that was offered during the lockdowns has left them more vulnerable.

The Government says since the Homelessness Reduction Act came into force in 2018, more than 400,000 households have been prevented from losing their homes or supported into settled accommodation.

Minister for rough sleeping Eddie Hughes said: “I have seen first hand the devastation of those who come face to face with homelessness.

The support we are announcing is going directly to communities that need it most.

“It will help thousands of people across England, with councils able to prevent homelessness before it occurs and put a roof over the heads of those who have lost their homes.”