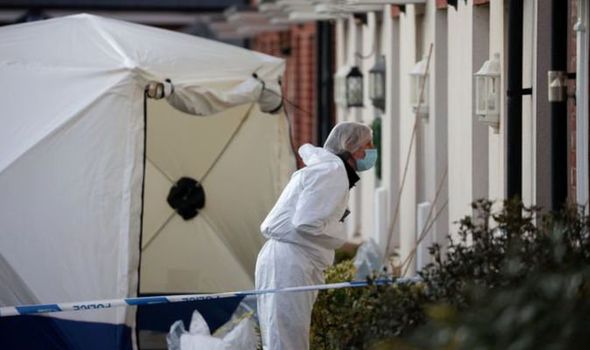 Police were called to a house in Norton Fitzwarren at about 9.45pm on Sunday where a man an a woman, both in their 30s, were found with serious injuries. Officers and medics attempted to attend to their pair’s injuries but they were both soon after pronounced dead at the scene.

A woman living nearby told the Mirror that the couple had been involved in a row over parking in the past.

She said: “We didn’t see much of (the suspect) really, but there had been rows in the past about parking.”

One neighbour also told the BBC that they heard screaming on Sunday evening.

Two men, aged 34 and 67, have been arrested on suspicion of murder.

They are both currently in custody.

The couple’s children were found in the home-cum-crime scene, thankfully unhurt, according to Avon and Somerset Police.

They are, however, very “distressed”.

Detective Inspector Neil Meade, of the Major Crime Investigation Team, said: “The thoughts of everyone in the force this morning are with the families of the two people who sadly died last night.

READ MORE: Sturgeon humiliated as she falls over after jumping from boxing ring

“Two young children were inside the property at the time of the incident and while thankfully they weren’t hurt, they are understandably distressed at what has happened.

“They are being looked after and specially trained officers have been deployed to support the victim’s families in what is undoubtedly the most difficult of times.”

Post-mortem examinations will take place in due course in order to determine the cause of death.

A cordon remains in place at two properties on Dragon Rise.

Avon and Somerset Police said those involved in the case have “prior police contact” and that a mandatory referral will be made to the Independent Office for Police Conduct.

They added that the case appears to be an isolated incident but that the area will see increased police activity “to provide the community with reassurance”.

They said: “Incidents like this are very rare but when they do happen, we know they cause significant concern so we’d urge anyone with worries or questions to speak to an officer or contact their local neighbourhood policing team.

“If anyone has information which would help our investigation, please phone 101 and give the call-handler the reference number 5221274497.”

Flowers have been laid at the scene.