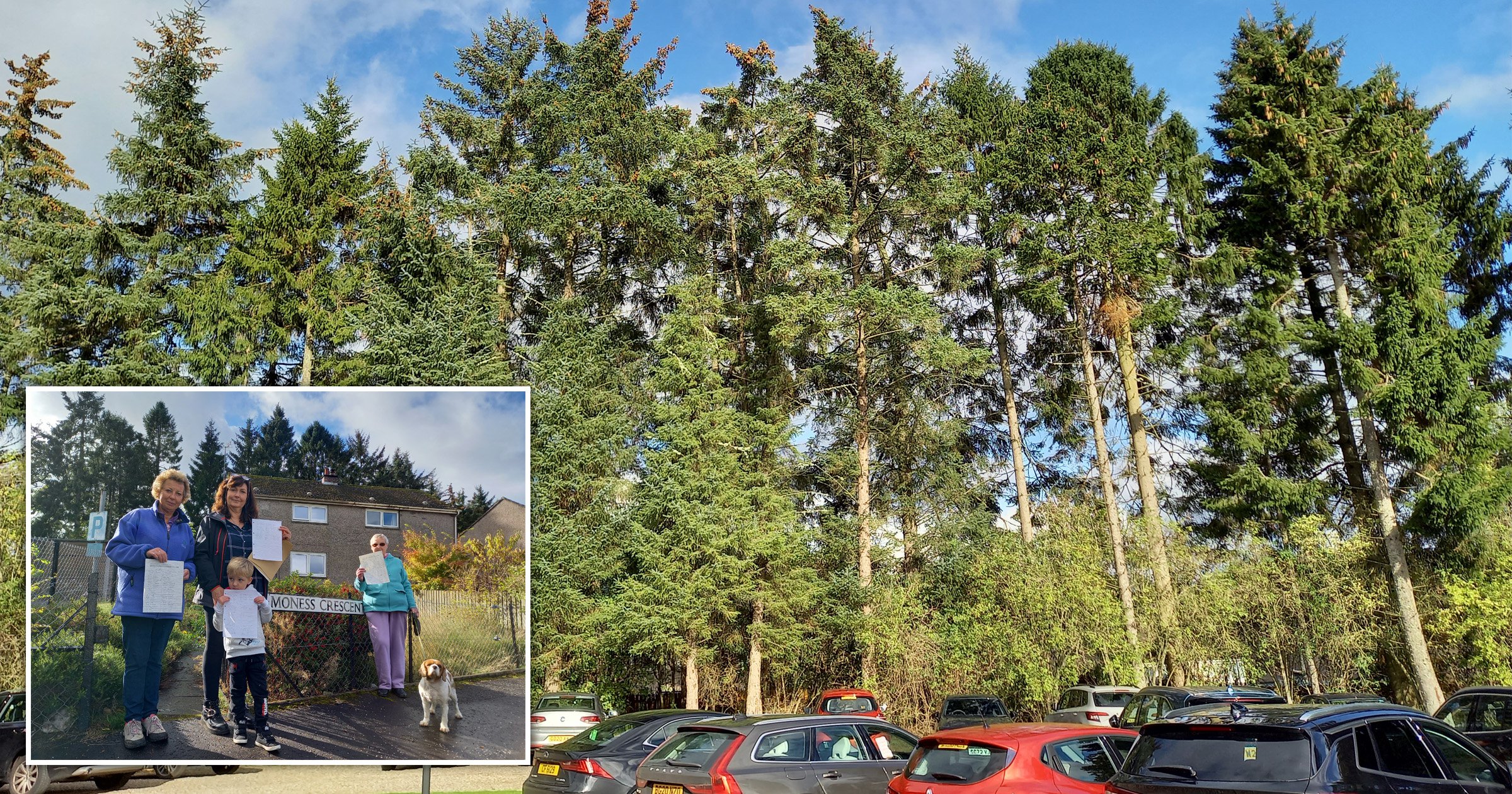 A group of 100 people say they have ‘given up’ watching TV because massive pine trees are blocking their signal.

The villagers are now calling for the trees in their neighbourhood to be felled because the problems are so bad.

They’ve all signed a four-page petition to vent their frustration and anger and are calling upon the landowner to cut down the trees.

They stand on Moness Resort in Aberfeldy, Scotland, which belongs to John McKenzie.

Many of the homes on Moness Crescent back onto the unbroken line of full-height conifers.

One of the residents, Elaine Murdoch, has simply had enough and just wants to watch her TV again.

She vented: ‘The pines are causing quite a few issues.

‘They have gotten so tall that they are affecting television signal, they are becoming dangerous for houses and cars and are shading light from homes and gardens.

‘We have 100 signatures on our petition.’

The villagers say they have now ‘given up’ trying to watch TV altogether because the problems have become so bad.

Elaine continued: ‘People living nearby are fed up with pixilated screens. It’s impossible to watch without becoming irritated.’

Elaine is one of the villagers who set up the petition, alongside Isla Moncrieff.

As soon as the petition was launched, people put pen to paper in the hope of once again being able to watch their TVs.

‘We had no difficulty getting names. We’d have even more if we got everybody when they were home.’

Others said they used to be able to see the cows grazing in the field and someone added she doesn’t even look up at the sky anymore because the problem is now so bad.

Mr McKenzie has responded to the residents plea in a formally worded letter.

He wrote: ‘All the trees are examined yearly by a qualified tree surgeon, as per our insurance company instructions, and any trees in doubt are taken down as required.

‘You may not know, but about seven years ago, we applied for planning permission and we were knocked back specifically due to the protection of the trees.

‘This year, we again asked the Perth and Kinross planning department, [who] attended a meeting on site with the forestry department.

‘At that meeting we were told that the planning department would strongly oppose any planning application, again due to the trees.’

Chair of Aberfeldy Community Council, Victor Clements added: ‘The problem gets worse all the time. Resentment is building up and the lack of action to satisfy them reflects on us as a community council.

‘We are aware Mr McKenzie wishes to develop houses on that area of land and feels that Perth and Kinross Council is blocking him on account of the woodland bordering Moness.

‘Certainly from a woodland management perspective, bats and red squirrels live in the trees, but with the pines gone, other existing trees would continue to provide a habitat.’

Perth and Kinross Council has been approached for comment by Metro.co.uk.