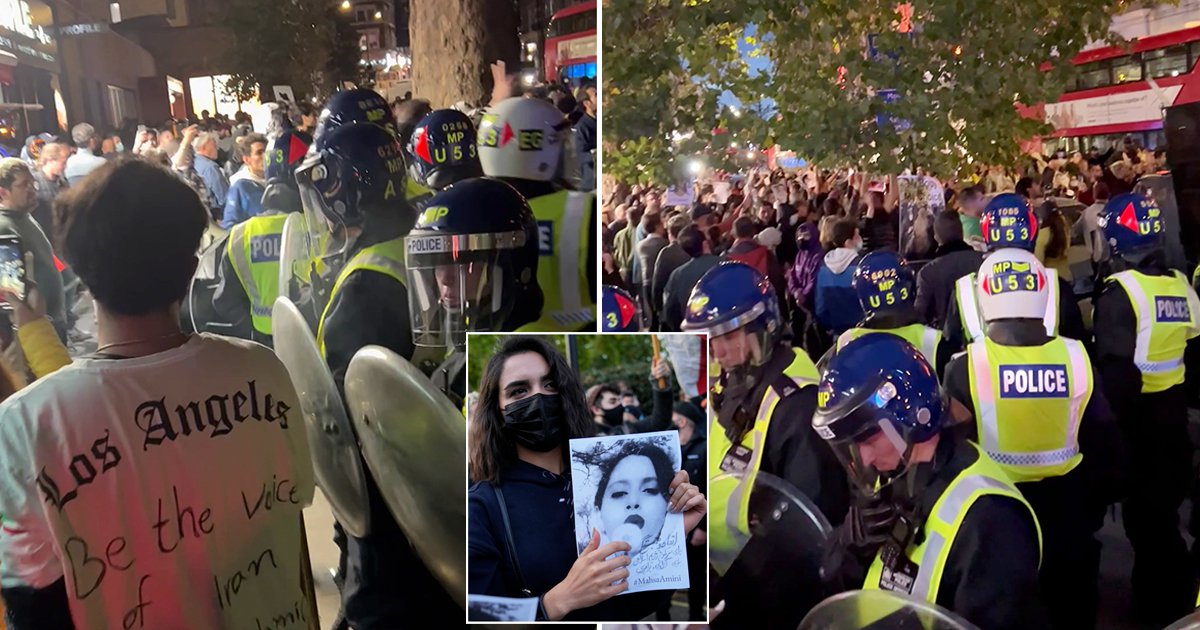 Five police officers were rushed to hospital with ‘serious injuries and broken bones’ after clashing with protesters outside the Iranian Embassy in London last night.

Violence erupted among the demonstrators as they demanded an end to Iran’s Islamic State after 22-year-old woman Mahsa Amini’s death in police custody.

Amini had been arrested and allegedly tortured for wearing her hijab too loosely in Tehran.

The London protest kicked off in the immediate vicinity of the embassy in South Kensington, before moving to Marble Arch and then to Maida Vale where the Islamic Centre of England was targeted.

Other protesters also descended on the Kilburn Islamic Centre in north-west London.

Crowds chanted ‘Death to the Islamic Republic’ and waved Iran’s former national flag from before 1979. One clip showed officers tackling a protester to the ground after they stepped over the police line.

The Met confirmed 12 people were arrested on suspicion of violent disorder.

Police managed to protect the security of the embassy but masonry, bottles and other things were thrown at them.

By 7.30pm many of the protesters had left the scene but a handful of officers remained on guard.

A Met spokesperson said: ‘During the afternoon of Sunday, September 25 a large number of protesters gathered at the location, with a substantial group intent on causing disorder.

‘Further police resources were brought in to support those on the ground after protesters attempted to breach police lines and had thrown missiles at officers.

‘Five arrests have been made for offences including violent disorder.

‘We are aware of a number of police officers who received injuries while dealing with the disorder; none of those are thought to be seriously hurt.

‘A significant policing presence will remain in and around the area to monitor the situation.’

Hundreds of protests have erupted across the world after Amin’s death on September 16, with protesters calling for an end to Iran’s totalitarian rule.

So far, at least 41 people worldwide have died because of the protests, although the figure is expected to be much higher.

In Paris, police were seen opposing protesters who were holding flags and shouting.

They used tear gas and anti-riot tactics to prevent hundreds of people from marching on the Iranian embassy.