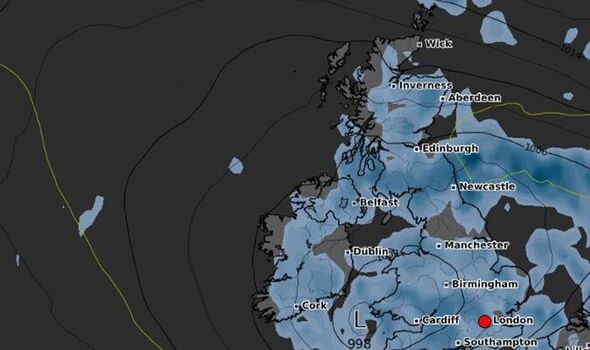 The yellow weather warning from the agency is in effect from 4.30pm to 2am on Friday. Areas affected include Brighton and Hove, East Sussex, Kent, Surrey and West Sussex.

From 4.30pm, the weather agency said some “flooding of a few homes and businesses is possible”, along with “some short term loss of power and other services”.

In their full statement, the Met Office said: “Heavy showers and thunderstorms will continue to run across southeast England through the rest of this afternoon and evening, these most frequent over Sussex and Kent.

“In some places, downpours could produce 10-15 mm in less than an hour, while a few locations which see repeated heavy showers and thunderstorms, could see a further 30-50 mm during the remainder of Thursday.

“Drier conditions are expected to gradually become established by around midnight, except in parts of coastal southeast Kent, where heavy showers may continue into the early hours of Friday.” 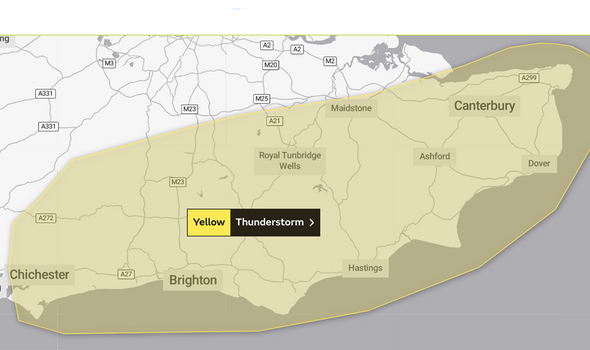 The alert coincides with a yellow warning from the Met Office for rain in Scotland.

In effect from 3pm to 11.45pm on Thursday, the Met Office warned of flooding and travel disruption in areas across Central, Tayside & Fife, South West Scotland, Lothian Borders and Strathclyde.

The Met Office said: “A period of heavy rain is likely later this afternoon and evening, perhaps with thunder close to the east coast.

“Some hillier parts, perhaps especially across Lothian and Borders, could perhaps see around 50 mm, this falling onto wet ground, increasing the possibility of a few flooding problems.” 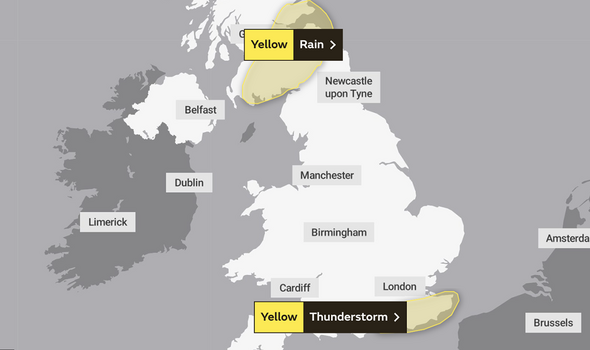 It comes as Hurricane Earl is expected to strengthen into a major hurricane while it moves towards Bermuda, which could impact the UK.

Paul Gundersen, a Met Office chief forecaster, said: “The influence of low pressure – with associated thunderstorms and bouts of heavy rain – will continue to dominate this week, especially on Friday.

“Though the low pressure will finally move eastwards on Saturday, meaning that many will have a dry day with some sunshine.

“There is a risk of potentially very heavy rain for a time on Friday for eastern and north-east England and southern Scotland. Adding in the risk of thunderstorms – which could bring gusty winds and heavy downpours where they form – many can expect an unsettled week.

“During autumn, forecasters have the added complication of trying to estimate the impacts of ex-hurricanes when they work their way into the North Atlantic.

“Although the cooler conditions outside of the tropics cause them to decay quickly, they can bring disruption to weather patterns by bringing lots of moist and relatively warm air which often becomes entrained within other home-grown weather systems.” 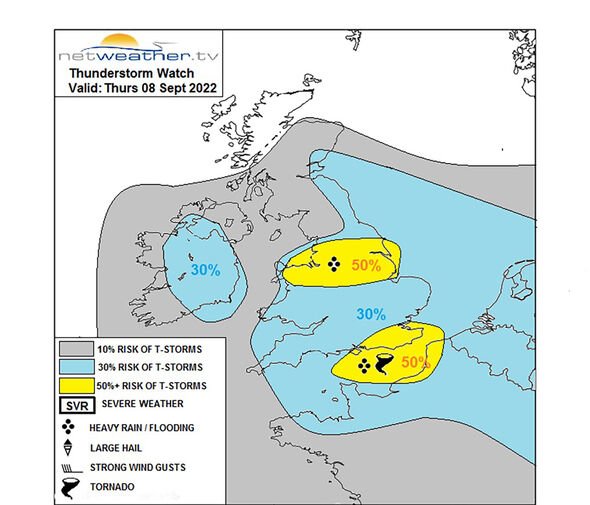 Netweather.tv holds there is a 50 percent chance of thunderstorms in the north of Wales and midlands as well as the south east.

The website said what storms do hit the south east could see heavy rain and flooding along with “tornado” conditions, with a 30 percent risk also covering much of England, Wales and Ireland.

Nick Finnis, Netweather.tv forecaster, said: “Later this evening and overnight, the models show an uptick in heavy showers and possibly thunderstorms across the far SE of England, mainly to the south of London.

“Given lightwinds aloft and where there is breeze convergence or areas of stronger bouyancy over warm SSTs – there is a chance of funnel clouds or een a few weak tornadoes or waterspouts forming with stronger updrafts into storms.