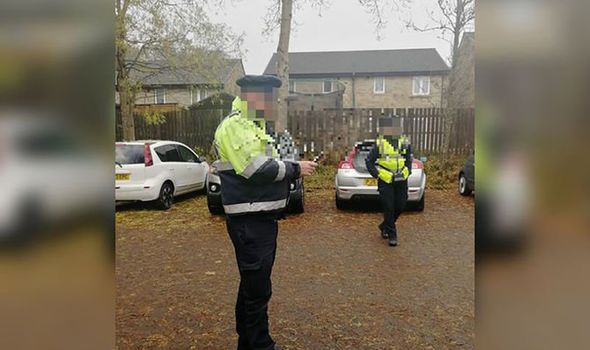 The 89-year-old man, who has not been named, was “very upset” to find the notice on his car on Friday. Jackie Griffiths, a volunteer marshal, was also appalled to see overzealous wardens ticket the car, in addition to several others at Ramsbottom Civic Hall in recent weeks.

Jackie, 61, said: “He was very upset and said he’d been given a ticket as he couldn’t find anywhere else to park.

“I spoke to the management of the vaccination centre, who were also upset and they contacted the council who came down.

“I believe they said there was nothing they could do as they had to park in marked bays.”

It is understood all bays in the car park at the venue near Bury, Greater Manchester, were taken but the man parked safely in another area within the confines of the car park.

But the elderly man looked “perturbed” as he returned to his vehicle, reports Manchester Evening News.

“I don’t see a problem with that, but it’s not marked bays. That is where people are getting tickets,” Jackie continued.

“This 89-year-old man got ticketed in this way.

“I was standing by the hall and I noticed an elderly gentleman looking perturbed.

“He was at the top of the hill looking at the car park signs. I asked if he was okay.”

Jackie Griffiths, a volunteer at the vaccination centre

Jackie was “incensed and angry” to see multiple vehicles belonging to people being vaccinated given tickets lately.

She said: “The car park is on a hill and you get elderly people who have to drive up the hill into the car park and then walk down to the centre.

“The bays are marked out but the paint is very worn.

“There’s also the issue of leaves obscuring the lines at this time of year.

“Part of the problem was other motorists, who are not being vaccinated, using the car park spaces.

“The council has provided these great facilities as a vaccination centre while at the same time you’ve got these flipping car parking attendants working against the whole principle of ease of vaccination.

“I’m furious, really upset that an elderly gentleman was treated in this way.

“What on earth are they playing at?”

A spokesman for Bury council, which is controlled by the Labour Party, said: “The clinic at Ramsbottom Civic Hall has been extremely busy offering first and second doses of the coronavirus vaccine, and now booster jabs too.

“As a result, the adjacent car park is often congested with people turning up for their vaccinations.

“There is very limited room to manoeuvre, therefore it is essential that drivers park properly and in a bay in order to maximise the space available.

“We have had a number of reports of cars being damaged due to drivers trying to negotiate other people’s poor parking.

“If anyone feels they have wrongly been issued with a parking fine, we would advise them to lodge an appeal via the process outlined on the ticket.”