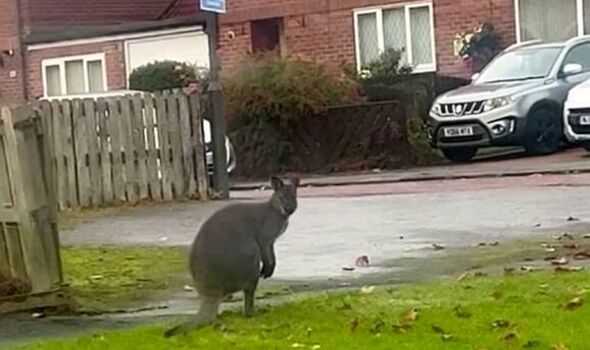 A schoolgirl has recorded the bizarre moment she was confronted on a quiet residential street by a WALLABY.

Cia Christie filmed the moment the Down Under animal appeared outside her home in Gateshead, Tyne and Wear.

Hopping around the marauding marsupial appeared unfazed by its odd surroundings.

As these pictures show the Labrador-sized Australian creature looked over its shoulder towards Cia before bounding off down the street.

Cia, aged 13, said she spotted something out of place on Wednesday morning.

She said: “I was in the car after getting ready for school and just looked out of the window and saw this wallaby.

“I couldn’t believe my eyes. It was 8.30am and I had to rub my eyes to make sure I wasn’t dreaming.

“I grabbed my phone and just started filming. It was hopping all over a grass verge outside the house. It was quite big and then it jumped off behind a fence.”

It’s not the first time wallabies have been sighted in the UK but it’s rare to see them in urban areas.

During the colonisation of Australia in the 19th century some wealthy landowners brought wallabies back to the UK and it’s thought the animals later escaped into the wild.

There are thought to be several thousand now living across Britain and the Isle of Mann.

On average the mammals are up to a metre tall with a 75cm-long tail they use for balance as they move along.

Like larger kangaroos, wallabies use a hopping motion to move and have been recorded at speeds of up to 9mph.

Cia posted the video on Facebook and received a message from an animal welfare charity saying it had bounded into nearby Chopwell woods.

Cia’s mum Anna Gibson, 52, said: “We got a message saying it was last seen in the woods. We haven’t seen it since but we hope it’s alright.

“We haven’t got a clue where it came from because there’s not any zoos or farm parks nearby so it could be someone’s pet which has got out.

“It’s certainly not what you expect to see hopping down the street in Gateshead.”