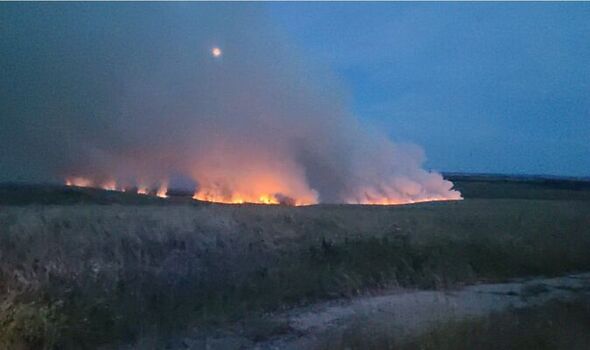 Fire crews have been told they cannot enter Salisbury Plain to tackle the fire on Ministry of Defence land due to risks caused by unexploded bombs.

An MoD spokesman confirmed there were several fires burning in the Salisbury Plain Training Area (SPTA).

Images shared by Dorset and Wiltshire Fire Rescue Service (DWFRS) show smoke billowing into the sky from the blaze.

They have advised residents of nearby Swindon to keep their windows closed as the smoke plume is travelling “some distance”.

The MoD spokesmand added all live firing had ceased for now but would not confirm whether military activity had caused the fires.

Emergency personnel were on standby should the fires spread beyond MoD land, the spokesman added.

The DWFRS said they were advised by the military yesterday there was a fire on Salisbury Plain, but were told it was “within the impact area”.

They were also told it was not “safe for firefighters to go there due to the risk of unexploded ordnance.”

The DWFRS did have four fire engines and two water carriers in attendance at the scene last night.

However, as of 9am this morning they have “no resources in attendance as the incident is being managed by our colleagues in the military”.

A spokesperson from The Ministry of Defence said: “We are tracking several fires within the Salisbury Plain Training Area and can confirm there is no risk to the public at this time.

“We are monitoring the fire and maintaining close communications with Dorset and Wiltshire Fire Service, who stand ready to assist should the fire spread beyond the impact area.”

In a newsletter published in June the MoD advised there would be armoured exercises carried out in the SPTA in the first three weeks of July.

It said they would be free-flow exercises that would see wheeled and armoured vehicles moving about the area both during the day and night.

The fire comes after the DWFRS issued an amber wildfire warning over increased fire risk due to the current spell of hot and dry weather.