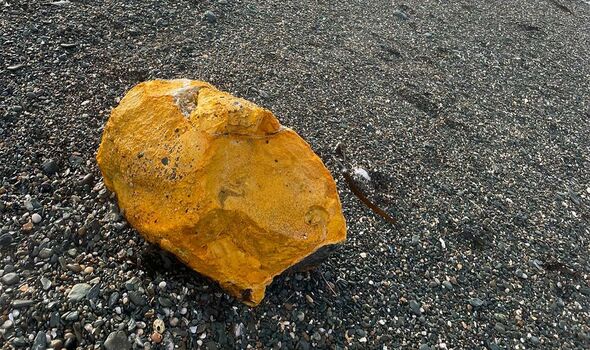 A dog walker has sparked debate after discovering a mysterious object on their travels along a beach.

Discovered on the shore near Trearddur Bay, Anglesey, on Boxing Day, another similar piece was also spotted on the same beach on New Year’s Eve.

Unsure of its origin, observers believe it could be solidified palm oil, potentially valuable ambergris, or ‘floating gold’ – a rare lump of whale vomit which is produced in the intestines of a sperm whale.

The discovery came to light on Twitter, reports NorthWales Live. Dog walker Ian Carmichael tweeted: “No idea what this is washed up on Porth-y-post beach this morning but the dog ran straight to it and rubbed herself on it leaving her bright orange! Dog walkers beware!”

It prompted a string of replies on the social media platform with the general view being that it was palm oil. For example, Phil Taylor @angleseyboy wrote: “Bath your dog and contact the vet as it’s palm oil and very toxic to dogs”

Michelle dw i, dw i’n byw yn Ynys Môn tweeted @michelleHR0803: “We’ve gone and picked loads of this up of Porth Y Post and think it’s palm oil. Too much of it scattered about to be ambergris but we will test it. Currently in the blue bin.”

And Fiona Owen @OwenFiona agreed: “Palm oil, yes. Your dog mustn’t lick it or eat it! Very dangerous to dogs!”

Mr Carmichael said he reported the debris to Holyhead Coastguard and it was almost all gone the following day. But he found that yet another piece of the debris had been washed up on the same Porth-y-Post beach on New Year’s Eve.

Frankie Hobro, director of Anglesey Sea Zoo, confirmed it was palm oil. She said: “This is a palm oil berg and it is common for large numbers of them to be washed up on beaches in the same area at the same time as they are produced by a ship washing out its ballast tank.

“The resulting oil bergs get carried off to shore and wash up on beaches, so large numbers of these could appear anywhere along the North Wales coast over the next week or so.

Ms Hobro urged dog walkers to look out for them as any contact with them can be extremely hazardous. She said: “Palm oil is a useful cleaning agent, so it is used by large ships to clean out their fuel tanks at sea. Unbelievably, it is perfectly legal for ships to dump palm oil into the ocean when they swill out their holds anywhere in the world, as long as they are at least 12 miles offshore!

“And the result is oil bergs like this one washing up on beaches. The colour varies and so does the size and shape – they can weigh up to a quarter of a tonne! Due to their high bacterial loading and smell, dogs find them extremely interesting and are immediately attracted to them, which is what happened to the dog owner who posted this photograph.”

Where do oil bergs come from?

Oil bergs can be carried for thousands of miles in the ocean currents when they have been dumped at sea, then they are washed up onto the shore, either in large chunks, or broken down into smaller pea-sized pieces, often over large areas of coastline, where they can wreak environmental havoc.

In the summertime when sea temperatures are higher the oil slicks they produce have been blamed for the death of seabirds such as gannets and for dead fish washing up on beaches and experts warn that they pose a severe threat to both humans and animals, as well as marine life. So if the public come across any on the beach they need to beware.

While palm oil itself is not hazardous to humans or animals, it is contaminated with fuel waste, diesel oil and other toxic products, so it harbours many germs and diseases through the bacteria which collect and grow on it. These toxins and bacteria also result in its colouration which varies from creamy white to yellow, orange or brown.

The most common threat is to dogs, and many dogs have become seriously ill or died after licking or eating oil bergs, as they have a laxative effect and can cause sickness, diarrhoea, dehydration and, in extreme cases, pancreatitis and blockages in the gut.

Ms Hobro says people should also keep their distance, and if you do come into contact with one, wash it off using normal soap or shower gel and water and wash your clothes thoroughly.