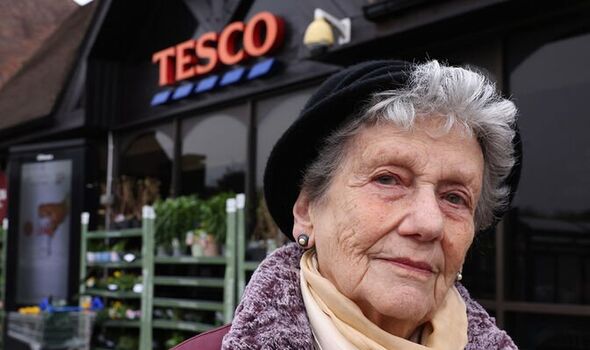 Lola Sledmere, 88, has finally been reimbursed the £1,000 taken by lowlifes who had followed her in a Tesco, and distracted her at a trolley bay to swipe her bank card in her unlocked car just yards away. She reported the subsequent fraud and theft of £1,000 at various cashpoints but was initially frustrated with the response of her bank TSB and the police.

The gran of seven has finally received the sum – and a further £150 in compensation from TSB – but she remains wary of supermarkets and wants large businesses to help their customers.

The pensioner said: “Considering these large supermarkets, like Sainsbury’s and Morrisons as well, make so much money, they should do more to help prevent these things from happening.

“I think maybe they should have guards or certainly uniformed security moving around the supermarket because there needs to be more of a presence for sure. If there was just more of a presence, these criminals won’t feel so free to act like this.

“The guards or security staff could just wander around the shops to watch for this behaviour. They need to be seen so they should have a uniform and, preferably, guns but I’m not sure that’s allowed anymore.

“I think that would probably stop this sort of behaviour.

“I’m relieved to have my money back but I’m worried for other people.”

It took TSB more around six weeks to reimburse Ms Sledmere, who had become resigned to never seeing the £1,000 again.

Ms Sledmere, who was targeted at the Tesco Superstore in Amersham, Buckinghamshire, said: “I am absolutely delighted they have refunded me. I am not a wealthy woman so it is very important.

“Initially, TSB was very casual about this. It didn’t feel like they valued me as a customer.

“I had reported the theft and it was just as if they didn’t care or understand it mattered to me.”

But TSB had a duty by law to do so, Express.co.uk found, as it and other banks must adhere to Section 75 of the Consumer Credit Act, which helps protect consumers.

Professor Georgios Panos, academic in Accounting and Finance at University of Glasgow, told Express.co.uk: “For a credit card, the act covers anything greater than £100. For a debit card it’s £50. It’s up to £30,000 for both so consumers can claim money lost in frauds back from the bank.

“The amount of time in this instance – around six weeks to two months – is generally the amount of time in which we expect banks to reimburse the money. In the majority of the cases, the banks can file their report and return the money back to consumers in this timeframe.

“It can be a traumatic experience for the consumer. It could take between one month and two months for the money to be transferred back and this can be traumatic.

“It just takes some time for the bank to transfer the money so in this example, the amount of time – six weeks to two months – sounds reasonable. The bank needs to process this.”

Ms Sledmere, who worked in psychology, contacted Thames Valley Police on March 4, but by then £1,000 had been taken from cashpoints in Buckinghamshire and ATMs in Leyton, east London, 47 miles from the supermarket.

Thames Valley Police investigated but closed the probe “pending further information coming to light.” Nothing did and the crooks remain at large.

It has since emerged CCTV, believed to have belonged to Tesco, has been reviewed by officers.

Prof Panos, who lectures in areas including International Financial Management, continued: “Obviously, it’s not the easiest crime to detect, especially in cases of lost or stolen credit or debit cards when the cards have physically been taken from the consumer. People have increased powers and sophisticated units for these crimes though.

“It can be that when suspects are arrested for other crimes, it then comes to light they were also involved in credit card frauds.

“My advice to consumers in my experience is to have patience and have trust in the banks and their commitment to the Section 75.

“I’d also say to get as much proof as possible in these cases. This is something we as consumers neglect – we don’t take snapshots of transactions and withdrawals on our mobile phones to help our case. Keeping any evidence will spend up these processes.

“One must report immediately when they feel they’ve been the victim of fraud, even in the cases when they might not be 100% sure. It might just be a bad feeling. One must cancel the credit card or debit card immediately to limit further damage.”

Considering these large supermarkets, like Sainsbury’s and Morrisons as well, make so much money, they should do more to help

But Ms Sledmere, from Little Chalfont, Buckinghamshire, told Express.co.uk she had given up hope of getting back her cash.

“I’ve received a great deal of support and it’s been incredible,” the mum of four continued.

“I had told the authorities and it seemed that was it so it is a great surprise to have the money in my account.

“It was a mystery. The bank hadn’t reimbursed me for a while. It wasn’t good.”

Ms Sledmere added: “I have been told this activity is rife, particularly in some supermarket car parks in and around London.

“It’s affected me very much. I have been struggling to sleep because I think about it all the time. It is just so clear in my mind. I have felt sad and worried, and stupid to be honest. It is just very upsetting.

“I have been very very upset and I no longer trust people.”

A spokesman for the bank said: “We have put this right for our customer; the money is back in her account and we will be offering an additional sum to reflect the distress caused. We apologise to Ms Sledmere that she has not received the support that our customers normally receive when they fall victim to crime.”

Thames Valley Police said the investigation had been filed.

A spokesperson added: “We received a report of a theft at around 9.05am on 4 March.

“A woman reported her bank card was stolen from her car in the car park of Tesco in London Road West, Amersham, while she was distracted by a man as she returned her trolley at around 2pm on 2 March.

“The card was then fraudulently used to withdraw a quantity of cash four times on 2 and 3 March.

“Following an investigation, the report has been filed pending further information coming to light.

“If anyone has any information relating to this, they should call 101 or make a report on our website, quoting reference number 43220096277.”

A Tesco spokesperson said: “We were sorry to hear about this incident and want to assure people that the safety of our customers and colleagues is our top priority. Our stores have CCTV in the car parks to deter thieves and we ask customers to report any unusual behaviour to our security guards.”

Morrisons and Sainsbury’s invited British Retail Consortium (BRC) to comment on safety in supermarkets on their behalfs.

Tom Ironside, Director of Business & Regulation at the BRC, said: “Retailers’ number one priority is ensuring their customers’ safety.

“They spend huge sums on crime prevention, and our last crime survey showed they spent £1.2 billion in 2019/20. They hire security personnel, install CCTV systems and many have rolled out body-worn cameras for staff. Store workers are often also trained on how to de-escalate a situation.”