Warmer temperatures earlier in the year have accelerated the growth of the insect population, leading to more active adult-sized wasps. One nest, removed in Norfolk, was home to more than 5,000 of the stinging creatures. Pest controller Andrew Dellbridge, 51, said: “This has meant the wasps have been more active for longer — giving them more time for the queens to build nests to hibernate in during the winter.

“There are large nests all over the place — there are lots more wasps, and the nests are huge.”

Mr Dellbridge, a Norfolk pest controller, has already removed a nest the size of a space hopper from a barn on the edge of the Norfolk Broads.

It measured two-and-a-half feet in diameter.

The nest was so full that insects were queuing to find an entry point to get inside. 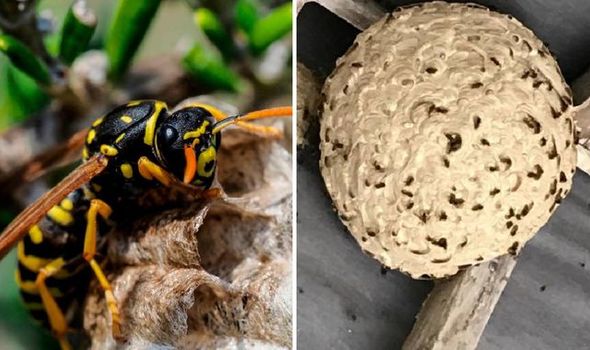 Wearing full protective gear, he sprayed the giant nest with spray to kill off the wasps.

He said: “It was quite an intense job – when you’re in that space, up close to the nest and can hear the deep buzzing sound, you really get a sense of the massive scale of the structure.

“I can well believe that there were multiple thousands of wasps inside that nest. 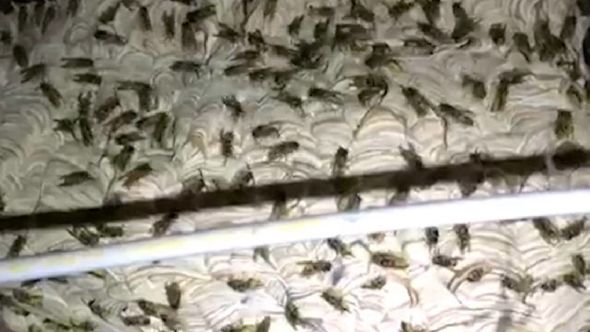 “You have to be careful when a nest built in a roof space gets to that size, as the wasps start running out of space, and will chew through the ceiling board to create more room.

“I started by spraying the nest with a knockdown spray, which is like a fly spray, which will kill off all the wasps inside the nest.

“Then I came back and sprayed it with a residual spray, to ensure any wasps that returned to the nest later would also be killed off.

“In most cases, including this one, we would leave the nest in situ – as wasps will never use a nest built by another colony in a previous year.”

The warmer temperatures mean the wasps will stay active until at least late October.

The weather extends the lifespan of the buzzing insect, allowing them to thrive and multiply.

The lack of moisture also means they are more aggressive and more likely to sting. 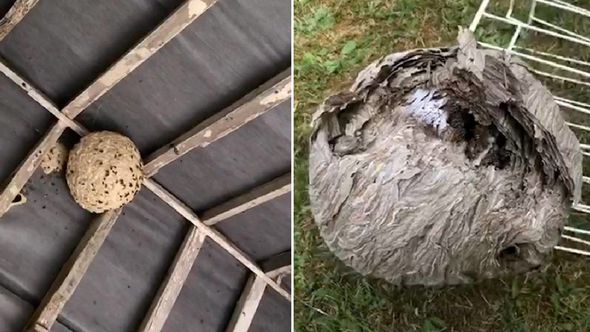 Nests start out small, the size of a golf ball, and quickly grow in size in the space of just a few months.

For most of the year, wasps feed larvae in return to a sugary substance they release.

As August and September bring fewer larvae, as they pupate in warmer summer months, and in turn less sugar.

Adult wasps are then forced to hunt out their own sugar, which is why they tent to fly straight towards sugary drinks and food.