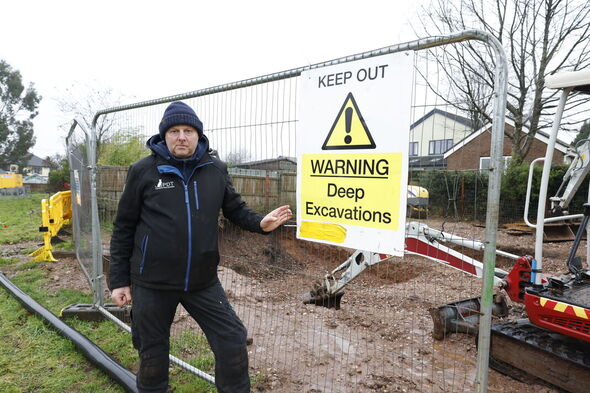 A dad is furious after Severn Trent dug up his back field and then left it that way for “five months”.

The father of two says a two-and-a-half metre deep hole was dug by Severn Trent so the firm could investigate a problem, before they apparently found the issue was down to a collapsed drain in a nearby garden.

Dean says he was told Severn Trent would repair the damage to his land but, since August, it’s remained as it was left.

He says it has been unsafe  to train his dogs, with one of his terriers falling down a manhole that the water firm had left uncovered.

Speaking from his home in Meir Heath, Staffordshire, Dean said: “I’ve phoned customer complaints, I’ve emailed and they say they’ll find out what’s going on, but then there’s no communication.

“I’ve got a big hole in my field that’s five metres by 18 metres and two and a half metres deep and I’ve been asking them for five months to make it safer as my dogs keep getting under the fencing and into the dig site.

“The hole is very dangerous and I’m worried my dogs will fall down it. I’ve also got 300 tons of soil in a great big pile.

“They’ve also left gates open and a dog has run out. Due to the power of social media we got the dog back after two and a half hours.

“On one occasion they also left a manhole cover off with no barriers and one of my terriers did fall down it, but I put my arm out and managed to grab him. I’ve also got this pump that runs through the night in my field and the neighbours are complaining about it.

“It’s affecting my business. The field is used for training dogs and when they’re there I can’t let the dogs out to exercise in my own field and when they’ve been I have to pick up the rubbish they’ve left, including gloves, to stop the dogs from eating it.

“They’ve now decided that they’re going to have to dig in next-door’s garden, but I still have got a big hole in my field and I still don’t know what’s going on.

“The effect on my mental health has been absolutely ridiculous.

“They said it would all be done within two weeks and it’s been ongoing for five months.”

“To ensure the work area is safe and secure, we have set up fencing around works area for the duration of the repair to the sewer. We’ve been liaising with Mr Banks directly, and are returning today to review arrangements to make sure everyone is happy with what’s in place.

“Again, we’re really sorry for any inconvenience caused and we will remain in contact with Mr Banks, and it will be a priority to complete the repairs and return the area back to normal as quickly as possible.”