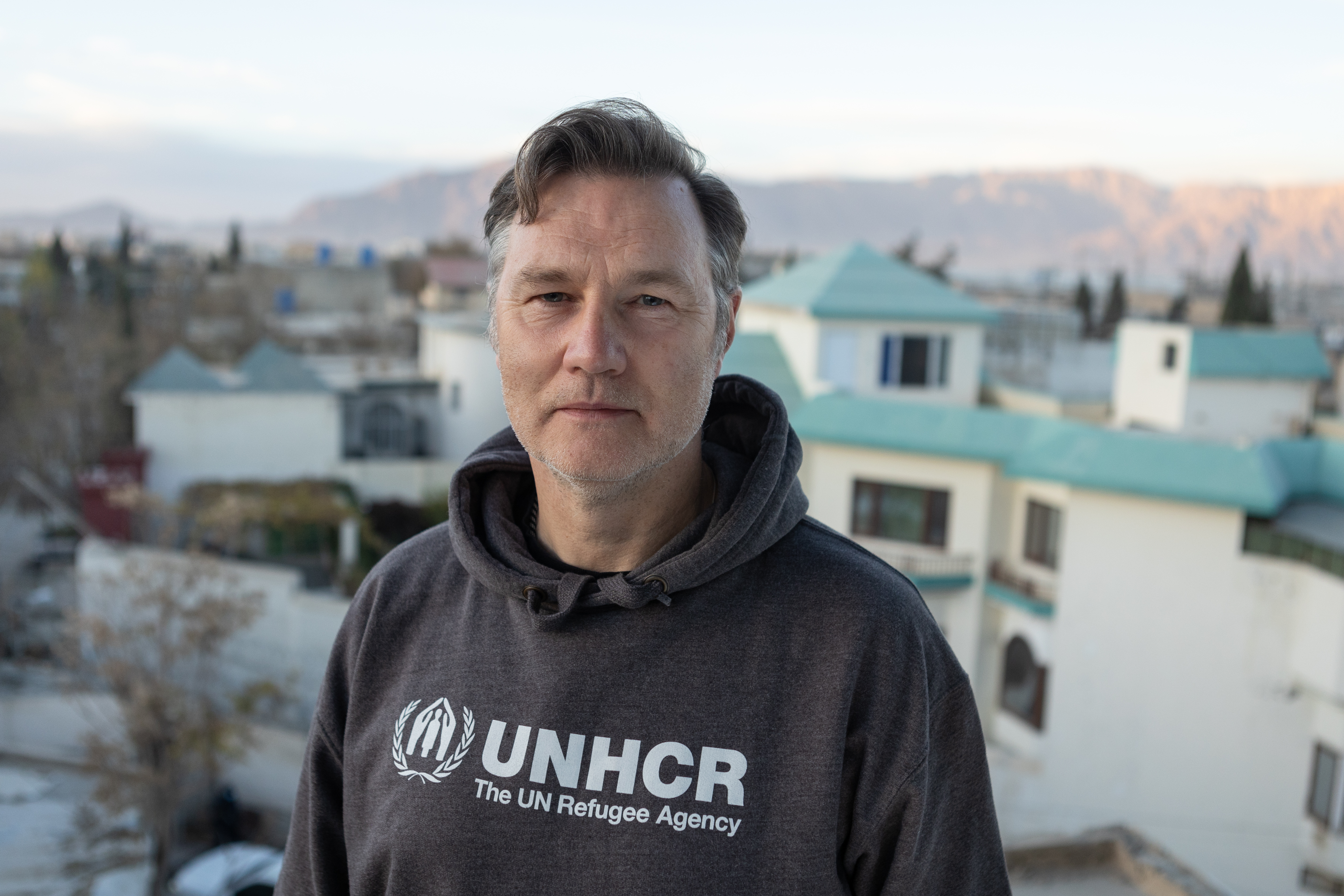 Haji Khan Gul arrived in Pakistan four decades ago as a refugee from Afghanistan.

Since then, he has raised his children and grandchildren just outside Quetta, which is on the border between the two countries. Unfortunately, the devastation of the recent floods washed away their home almost completely.

Thankfully, UNHCR helped him pick up the pieces so that he could literally rebuild his life from the ground up, by providing emergency cash assistance to reconstruct the central wall. His pride and relief at having an outpouring of support from the British public was truly moving.

This is just one of the reasons why I do the work I do as a Goodwill Ambassador for the UN Refugee Agency. But there’s a crisis happening right now and people – especially refugees like Haji – need more help than ever.

Visiting Quetta this month, I was both inspired and shocked to witness the realities of the refugee response there. Since 1979 when the Soviet-Afghan war began, waves of Afghan refugees have been driven first from their homes, and then over borders.

In my own lifetime, conflict after conflict in the area has blazed across our television screens, only to seemingly fade from public consciousness. Today, little more than a year after the fall of Kabul in August 2021, attention on the humanitarian crisis has all but disappeared.

A suicide bombing in the few days I was in Quetta – senselessly sparked by a polio vaccination campaign – hardly resonated outside of domestic news.

The flash floods that devastated and killed tens of thousands just three months ago are gone from the headlines too, even while people still struggle to pick up the pieces. The spotlight is fleeting, but real consequences linger.

I can’t help but wonder if this is the tragedy of the Afghan exile – that global attention hardly spans a year, let alone 40. Afghan refugees and the countries hosting them have borne the consequences of Afghanistan’s turbulent history for decades now.

Community elders in the refugee villages outside Quetta spoke to me of poverty and a lack of vital services, despite the commendable efforts of the Pakistani Government to include Afghan refugees in national systems – through health systems and primary education on par with nationals.

I saw real change in Afghan communities in Pakistan and hope rising against despair.

Abdul Malik – a young teacher of Form 6 in a refugee village – stays up at night marking papers by the light of a new solar lamp. Mehboba, a student at the University of Balochistan, told me she plans to take her seat at the global table as an advocate for Afghan women when her studies are done.

All of them – including the aforementioned Haji – told me the same thing: they are grateful for the help, but it is needed by so many more.

The floods in Pakistan this year reflect its place in the world’s 10 countries most vulnerable to climate change. That threat has meant that those already struggling were hit hardest. The climate crisis is everyone’s crisis, but some people and some countries are at the forefront.

The number of people being displaced by war and persecution hasn’t been seen since World War Two. Now, with global attention focused on Ukraine, older crises like Afghanistan have been left behind – even with a renewed exodus since the Taliban re-took power.

While there is acknowledgement from authorities here in the UK and beyond that more support is needed – with the UK making some 2,000 resettlement places available to UNHCR for people like Afghan refugees in Pakistan and Iran this year – the overwhelming majority of Afghans have no safe route through which to change their fate or even join family.

These shocking realities mean that we should turn to those who arrive on our shores directly with more understanding and compassion. It’s unfathomable that the UK is externalising its asylum obligations while others carry the lion’s share of the global refugee emergency.

While refugees have become part of an intensely politicised debate in the UK of late, the real issues are humanitarian.

Looking at these issues from a distance, it’s all too easy to forget the personal tragedies when I’d like to think all of us would instinctively help such a family standing before us.

In fact, studies show that the majority of people across the UK believe refugees make a positive contribution to our country, and four in five agree that people should be able to take refuge to escape war or persecution.

There are so many things we could each do to change the current situation – whether it be to give what we can in donations, welcome a new neighbour or reach out to our local MP.

Of all the things I’ve learned working with the UN Refugee Agency, the one that still floors me is how long people can hold onto hope. For their families, children and their own basic survival – those who have lost everything somehow find the strength and courage to get back up, again and again.

Despite everything, Afghan refugees hold onto this in circumstances most of us can hardly imagine. We owe it to them not to forget their plight.

Their resilience compels us all to act.

For more information, including how you can help, go to the UN Refugee Agency website here.