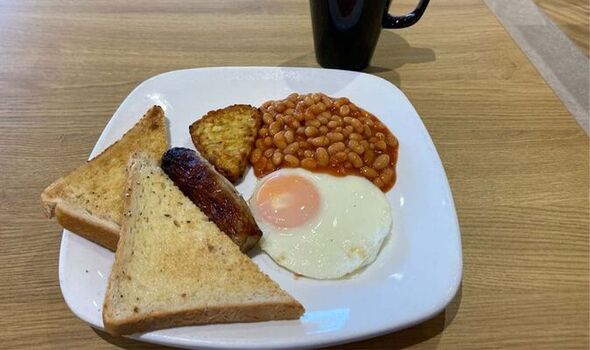 Before Covid-19, most supermarket cafes were pretty basic, giving school canteen vibes rather than a cool place you would want to go and eat brunch. Things are completely different now, with avocado being a regular on the menus – and one even serving shakshuka. Hoping to explore which supermarket offers the best breakfast for hungry customers, Birmingham Live’s Rebecca Astill decided to visit several and offer her ranking for the best brunch.

Here’s how she got on:

Initially, my plan was to try an English breakfast at each, but I soon realised not every cafe served the full shebang, so I just ordered whatever I liked the look of the most on the menu. Here were my thoughts on each one.

The first café I tried was Waitrose, where I had an egg and bacon muffin and a latte which came to £6.45. All the ingredients used are ones you can buy in the supermarket itself.

The choice was reasonably limited, with only six menu options, but I do not mind that in a supermarket café. It meant my food was served promptly, within five minutes, and warm.

Inside, the egg was a strange consistency, a kind of mashed boiled egg instead of fried or scrambled. However it was well seasoned with pepper and overall was tasty.

As I ate, the waitress at the bar explained to customers that she had worked there for 10 years now, and considered herself “part of the furniture”. A magazine stand on the wall held newspapers from that day to grab and read as you ate, making it more than acceptable to dine alone.

Next I went to Asda, which was a very different experience indeed. Think neon green and bright orange chairs, a big serve-yourself coffee machine, and not a soul in sight other than yourself.

Walking into the Asda café felt pretty ominous, it was huge but soulless. I ordered the mini breakfast, which consisted of one sausage, one rasher of bacon, one egg, one hash brown, baked beans and a tomato, along with a latte.

That all came to £6.40, so only just less than the Waitrose meal. Surprising, given you would usually expect Asda to be a lot cheaper, and the fact the coffee was not barista made.

The plate that arrived was a little sad, the beans were placed over the egg, the bacon was thick but not crispy, the sausage was thick and mushy, the hash brown was bland and the coffee had a metallic tang. That said, I did have a runny yolk in my egg, which almost saved the meal.

Next up I went to Morrisons, which I had heard great things about. The café itself was light and welcoming. The chairs were wooden and it all felt a bit more like a café than a canteen.

The coffee was out of a machine rather than barista-made, but it was good coffee nonetheless. The food took a little longer to come to me but everything was warm and fresh, the bread was well buttered, just how I like it, and everything was crispy and generously portioned.

Fourth on my list was M&S, although I would like to make it clear I went on different days to each. Again, there was no option of a full English breakfast so I chose the smashed avocado and poached toast for £6, and a latte for £2.95, coming to £8.90 overall with an unexplainable 5p discount.

The café was beautifully laid out, with tables and tables which were mostly filled. As you approached the till, you could pick up some cold bits like porridge, fruit and drinks and there was even a small buffet.

After paying and finding a seat, my food arrived within a few minutes. It was arranged like you would expect in an Instagram worthy breakfast café, with salad and bright red tomatoes as accompaniment. Everything was looking hopeful, until I tasted it.

Firstly, you would be pushing it to call the eggs I was served, poached eggs. They were boiled eggs.

There was no runny yolk and they had the shape on a boiled egg with the hard shelling. Then, the avocado was completely covered in seeds, which had not been on the menu, so much so that you could not take a bite without their overwhelming taste taking over the whole breakfast.

I am sorry to say I left half of the plate untouched.

Then I went to Sainsbury’s, where the staff were incredibly friendly and even took my drinks order before I reached the front of the queue, so it was ready and waiting for me to go. I had the bitesize breakfast which included a sausage, an egg, a hash brown, baked beans and a slice of toast costing £3.15, and a latte costing £2.65.

Altogether, it came to £5.80, the cheapest yet. I was slightly disappointed the smaller breakfast did not include a rasher of bacon, arguably the best bit of an English breakfast.

Other than that, everything was just okay, service came within 10 minutes, my plate was warm and the egg was slightly runny. The hash brown and the sausage could have been a little crispier.

It did not blow me away but I ate it up happily.

Last but not least, I went to Tesco which, spoiler alert, was a very good café to end on. Firstly, I was shocked by how much choice there was, despite the signs it was running on a reduced service.

Most of the other supermarkets had picked a few ingredients and offered six or so menu choices with variations of those ingredients. Tesco has waffles, halloumi, shakshuka (a classic North African/Middle Eastern dish of eggs poached in a sauce of tomatoes, olive oil, peppers, onion and garlic) chorizo, granola and more.

It certainly felt like I was choosing from a café menu in town rather than a supermarket. I chose the chorizo breakfast eggs for £5.25 and a latte for £2.75, meaning my receipt came to £8 overall. Yes, it was one of the most expensive, but boy it was worth it.

The chorizo was chopped up into tiny pieces and sprinkled over fried eggs and smashed avocado on sourdough toast. Laced between those components was wild rocket, chilli flakes and lime.

Everything was absolutely perfect, but I did have to dock one mark for the price.

Overall I found a big gap in the supermarket cafes between those which made a bit more effort to put customers at ease, and those who simply saw it as a grab and go. I am sure it will come as no surprise to anyone that Morrisons, famed for its breakfasts, reigned supreme.

Having said that, I am still dreaming of the chorizo eggs at Tesco.