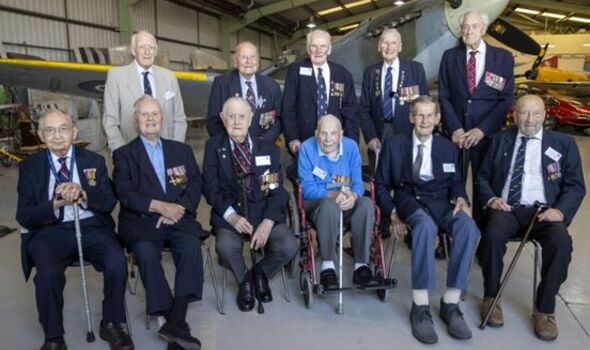 Nine former pilots, soldiers and sailors from the British Army, Royal Navy and Royal Air Force and a former mechanic gathered to witness the iconic warplane flying over the Kent countryside to mark Veteran’s Day at Biggin Hill’s Heritage Hangar.

But they denied being heroes, adding: “We were just young men trying to do a job for the country”.

And in an emotional moment, a 99-year-old former mechanic told an engineer who is currently charged with repairing Spitfires at the Kent airfield: “We’re from the same place”.

Four of the veterans, Flight Lieutenant George Dunn, Flying Officer John Mussellwhite, Corporal Len Brereton and Squadron leader Arthur Legge were given the opportunity to fly alongside the iconic warplane.

Flight Lieutenant George Dunn, 99, who flew in 44 operations in a Mosquito bomber and was awarded the Distinguished Flying Cross, said: “It is great to be up there.”

“It is nice to think people still feel for us veterans – that we haven’t been completely discarded.”

“The turning point was when they put the memorial up in Hyde Park, which all the Royal Family went to. It was then the public realised what Bomber Command had done during the war.”

“One doesn’t talk about heroism. It was a job we had to do. We were only young men.”

“We didn’t think of ourselves as heroes. We were just young men trying to do a job for the country.”

“We came through it. We appreciate that the public are aware.”

“Bomber Command didn’t get the recognition. I’m not being clever, I don’t think the war would have finished when it did without Bomber Command.”

Another among the 10 who gathered for the special event at London’s Biggin Hill airport was Jane Britten.

The 99-year-old repaired and serviced Spitfires and Lancasters after working in a “Shadow Factory” in Leicester making parts for many of the aircrafts.

She would also help the planes land whilst working at airfields across the country, telling the pilots when to cut the engines off before grabbing her toolbox to repair the warplane.

The 99-year-old emotionally declared it was a “joy” to be in the air again, beaming with delight for minutes after landing.

He declared to the Daily Express: “It was excellent. I really enjoyed it.”

Corporal Len Brereton, of the Third Royal Tank Regiment, was in the leading tank that entered the Belsen concentration camp after months of intense battles across Belgium and Holland.

Corporal Brereton landed in Northern France six days after D-Day and he was involved in the liberation of the Belgian city of Antwerp.

He said: “It was brilliant. It was the first time I had been up next to a Spitfire.”

“I’m glad it is over. It was strange, if you were a regular in the Army, it was a bit of a taboo to do what was known as ‘swinging the light’ so much about the war.”

“A lot of the memories have faded.”

“I’m the only one left from my regiment. I speak to their children more than anything. Today, I’m here with the son of one of the guys I was with.”

“The gunner from the tank I was in – his daughter has just made contact with me.”

“The war itself – the only good thing about it is that it is over.”