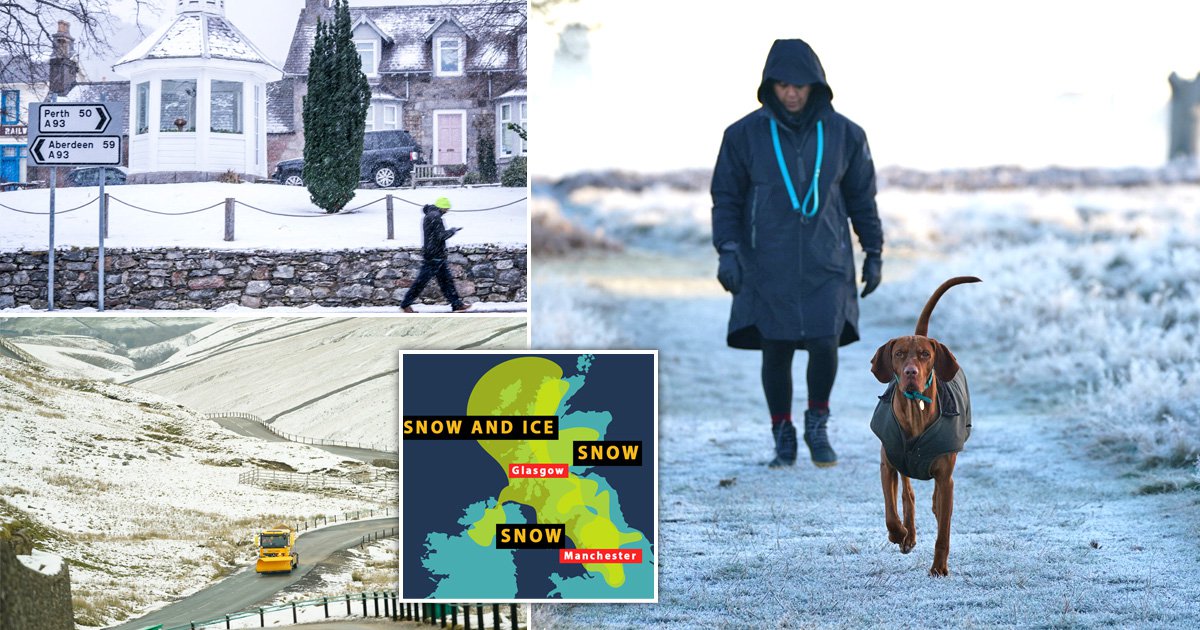 Swathes of the UK woke up to sunny skies and a frost or dusting of snow this morning – but the picture-postcard scenes aren’t set to last.

The UK experienced its coldest night of the winter so far on Wednesday with temperatures reaching a chilly -8C in Topcliffe, North Yorkshire.

People in the north of England have been sharing picturesque scenes of frosty landscapes and snow-covered hills as they enjoyed a cold but beautiful start to today.

However, by midday the pretty wintery weather had given way to blizzards with forecasters warning worse could be on the way.

The Met Office has two weather warnings for snow and ice in place today and tomorrow, covering most of Scotland and Northern England.

One runs from 10am to 4pm while another is in place from 8pm until 11am tomorrow morning.

Parts of the UK are bracing themselves for ‘thundersnow’ with showers and lightning strikes expected to knock homes off the power grid.

Forecasters have warned many areas will see one to two hours of snow, with a risk of temporary slushy accumulations above 100-150m, leading to difficult travel conditions.

There is also a risk of dangerous icy patches and of lightning strikes from isolated thunderstorms, forecasters have said.

On higher routes, forecasters have predicted strong winds could lead to drifting and temporary blizzard conditions.

The cold snap marks a noticeable change from less than a week ago when the country experienced the warmest New Year’s Eve since records began.

The nation saw out 2021 with temperatures more commonly seen in April than January when thermometres read highs of more than 15C degrees.

The unseasonal temperatures caused havoc for ice rinks, including Hampton Court’s, which had to close due to the ice starting to melt.

Richard Miles, a Met Office spokesperson said blustery conditions throughout Thursday would make temperatures feel colder for many during the day as air from the Canadian Arctic sweeps across the UK.

Thursday’s snow in the north will be followed by blustery showers, with another chilly night expected.

Friday will see a repeat of the wintry conditions in the north, with snow or sleet followed by sunshine.

East and south-east England will have a bright day but persistent rain was expected in the South West and South Wales.

The weekend is expected to remain unsettled, with milder spells, as a spiralling area of low pressure brings changeable weather conditions to the UK.