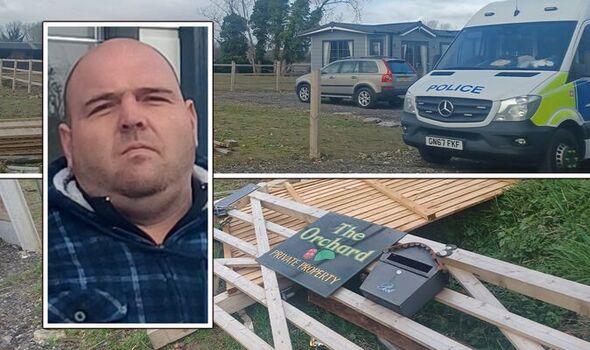 Officers from Medway Council arrived at land off Lower Rainham Road in Rainham, Kent at around 7am yesterday to evict the group. Escorted by officers from Kent Police, they issued an enforcement notice and ordered them to leave the site – which is known as The Orchard.

The group says they had no notice of the action taken that day to leave the site.

Medway Council disputes this and says the “occupants do not have planning permission to live on this site”.

It said it served an enforcement notice in 2017 which prevented residential occupation and, over the last 12 months, have advised them of the consequences of occupying the site, including with hand-delivered letters.

Speaking to the Kent Messenger, traveller James Golby said: “We had women and children crying.

“We were woken up at 7am. We had no notice, they just arrived and started smashing fences up. My four-year-old was hiding under her pillow.”

The site comprises of seven plots, each individually owned, with static caravans and wooden ‘day houses’ as well as gardens and play areas for children, horses stables and a paddock.

The travellers bought the land in 2020 and say they applied for planning permission to live there, but it wasn’t accepted by Medway Council.

After buying the land, the families said they discovered there was a previous enforcement notice issued in 2017.

One woman, who did not want to be named, said: “When we bought the land, nothing came up on the land searches that there was an enforcement notice.

“There is nothing on the land registry. Now we are going to be homeless.

“My son is in Year 1 at Riverside school, he is settled there. If we have to leave I don’t know where we are going to end up.

“They will take down my day house and take away my mobile home if I don’t move it.

“We had no warning, they didn’t tell us a date they would be coming down here. At least if we had been given that, we could have had some sort of say. We could have had the paperwork ready to go to court.”

She added: “We’ve had a lot of support from the local community.”

Mr Golby, 38, said: “We were told to seek legal advice so we did, we have a solicitor and a planning agent.”

The dad-of-five added: “I know there are some bad members of the travelling community, just like you get in any community. But we are just families trying to get on with our lives.

“Our kids go to local schools. We can’t live at the side of the road any more, that way of life has gone.”

A spokesman for Medway Council said: “Unfortunately, the occupants do not have planning permission to live on this site.

“We served an enforcement notice in 2017 which prevented residential occupation of this agricultural field.

“Several letters were hand-delivered to the occupants warning them that enforcement action would be taken if they didn’t comply with the notice.”

A spokesman for Kent Police confirmed officers were assisting at the scene.