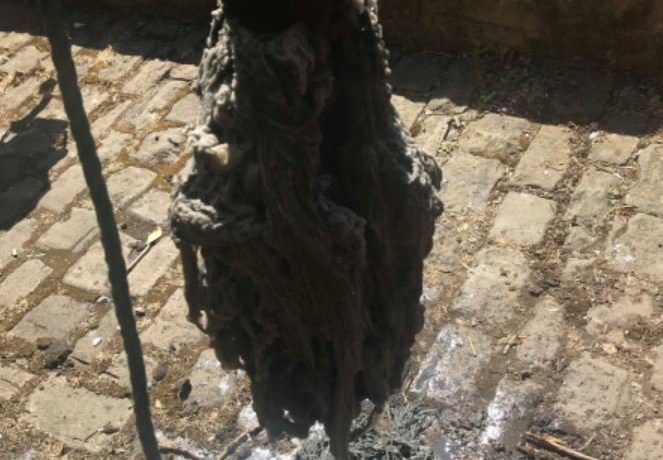 People are being urged to avoid flushing wet wipes after grim pictures showed the impact they have on the UK’s sewer network.

Even though the product is an essential for many – especially, young mums – MPs are calling for a crackdown on wet wipes containing plastics over their disastrous environmental impact.

Labour MP Andrew Gwynne said the effect of such pollution on rivers is making them look like a scene from Tim Burton’s The Nightmare Before Christmas.

‘When there are overflow discharges into rivers from water treatment works these wet wipes aren’t filtered out,’ the MP for Denton and Reddish told the Commons.

Addressing environment minister Rebecca Pow, he stressed River Tame in his constituency has a ‘very high concentration of microplastics’.

He said it is a ‘massive concern’ that the trees along the riverbank are littered with wet wipes.

Mr Gwynne added: ‘So, what is she doing not just to get the message out not to flush wet wipes down the toilet, but also to clean up our riverbanks so that they don’t look like a horrific scene from a Nightmare Before Christmas?’

Ms Pow stressed the government is ‘determined’ to tackle the problem, adding a possible ban on wet wipes containing plastic could be one of the routes being explored.

‘I can only agree with him that it is revolting and these wet wipes do go down,’ she said in response.

‘That’s why we get these more frequently than we need overflows of sewage… because they are being blocked by wet wipes.

‘It’s slightly extraordinary really. But that’s why we’re doing all the work, that’s why we’ve done the call for evidence, and we will come up with some suggestions of what we propose to do very shortly.’

Earlier in the session, the minister said 93% of sewage blockages are caused by unflushable wet wipes, which get fat stuck around them and create fatbergs.

‘We have already run a call for evidence to explore policy options for tackling wet wipes, including a possible ban on those containing plastic,’ Ms Pow added.

‘Obviously we got a huge response to this call for evidence.’