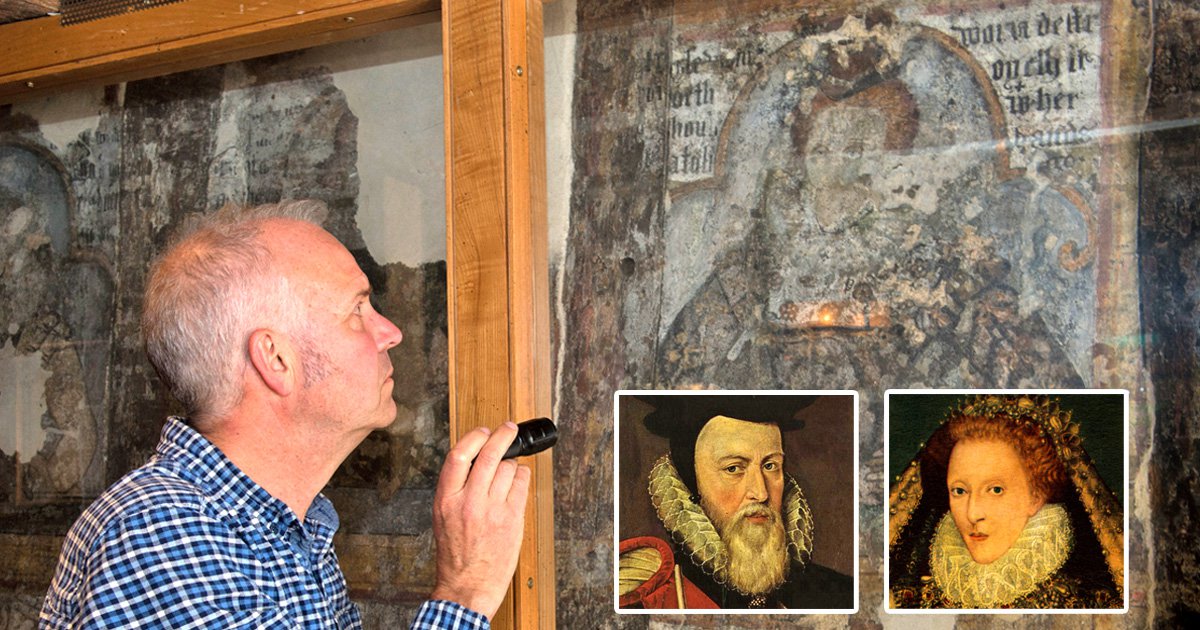 A Wetherspoon pub has yielded up ‘incredibly rare’ paintings from Elizabethan times believed to show her chief adviser William Cecil.

Restoration work at The Star in Hoddesdon, Hertfordshire, revealed five wall panels showing figures dressed in the finery of the time.

They are thought to include Elizabeth I’s strategist and confidante Cecil, formally known as Lord Burghley, who bought the inn in 1580.

One of the panels also shows a figure who bears a likeness to Elizabeth I, although experts have yet to confirm if it is the monarch.

The paintings have been preserved as part of the pub, in a building dating back to the 15th Century, after conservators were brought in.

Mark Perry, of The Perry Lithgow Partnership, said: ‘The paintings are an incredibly rare find, not only in the fact that there are five together but also in the unusual subject matter.

‘They have local and national significance. You get occasional single portraits like this but to get five, and there may have been more before, is very rare.’

The Grade II-listed building was once under the ownership of Cecil, who had a key role in Tudor Britain at the heart of the Queen’s reign.

He was also Lord High Treasurer, which might explain why the figure bearing his likeness is holding bags of coins.

His family, the Earls of Salisbury, had ties with the area around the pub.

Mr Perry said: ‘The paintings seem to be related to the Burghley family, with William Cecil having been a hugely important figure of the time.

‘There are three males and three females and one seems to show someone who is a chancellor or treasurer because he is holding bags of money. The feeling is that this is probably Lord Burghley.

‘It’s hard to definitely say, but if it is and the other pictures are of his family, that is incredibly rare. There is also someone who also looks extraordinarily like Queen Elizabeth. It would be a leap to say it is the Queen but he did have a close relationship with her.’

The richly-coloured paintings show half-figures which alternate male-female and include a woman cradling a lapdog. The displays, which once extended to the floor, are accompanied by biblical inscriptions.

‘It’s almost like a historical record of the time,’ Mr Perry said.

‘The women are wearing costumes that are decorated with bows and decorative details which are almost identical to portraits of Queen Elizabeth I. Along with the hat styles and millinery it’s hugely important to people who are interested in that kind of thing.’

Although the paintings have missing patches and the lower panels have deteriorated, they have largely survived numerous alterations over the past 500 years at the building, located on what was once a coach route connecting the north and south of England.

As well as the five panels showing the figures, a sixth bears the black outline of a simple floral decoration, thought to date back 100 years before the Cecil family redecorated.

Wetherspoon hired the conservators in 2014 as part of refurbishment work after the chain took over the pub, formerly The Salisbury Arms.

Architectural features, including the roof beams, date to the mid-1400s and suggest the building might once have been a medieval open hall.

‘It’s incredibly unusual that this amount of painting has survived for 500 years or so in this kind of condition, especially with the numerous alterations to the building,’ Mr Perry said.

‘It’s odd that it’s never been destroyed and that it hasn’t been discovered before with the work that has taken place and the fact they are on an external wall, with the risk of damp and damage from the outside.

‘Apart from one of the heads being destroyed during building work it’s all in reasonably good condition. It’s almost as if people knew the paintings were there and wanted to keep them.’

A glass and timber screen now protects the finely-dressed witnesses to history staring back at punters.

Mr Perry, who carried out a maintenance clean and condition check last week, told Metro.co.uk that the pub environment shouldn’t hinder their preservation.

‘It’s all absolutely fine, nothing’s deteriorated in the last seven years,’ he said. ‘There will be regular inspections every five or 10 years to make sure everything’s ok and to carry out any remedial action that’s needed.

‘Wetherspoon are doing their best to protect it and that’s all us as conservators can ever ask for; that the owners have a curatorial responsibility, which is great.’

Matters of state, such as the beheading of Mary, Queen of Scots, might have distracted the landlords of the day despite their decorative flourishes.

A tenant of the Black Lion, which the inn was known as at the time, wrote to Cecil’s son, Sir Robert, to say it was in such disrepair that there was ‘neither chamber fit to receive any person or stable for their horses’.

However, true to his reputation for out-manoeuvring his opponents, Cecil Snr seems to have had the last say.

Asked what the statesman might have made of being an enduring part of the pub, Mr Perry replied: ‘I think he’d be delighted at his name living down through the centuries.

‘Although his name will always have a historical legacy he’d probably be rather pleased to have something he commissioned showing him in such a prestigious way last this long.’