The Brexit Party are topping the polls for the European elections and have increased their lead, with voters frustrated at both the Conservative Party and Labour Party. Asked about the upcoming European elections scheduled for May 23, one East Midlands voter ripped into all politicians for the way they have handled Brexit. She told Channel 4 News: “I think all the politicians have let us all down, from all parties.”

Another voter said he would not vote in the European elections as he does not want MEPs from the UK to be sent to the European Parliament.

He said: “I don’t want us to be in Europe, so what is the point of me sending my vote to send somebody to Europe when I don’t want them to be there?

“It is just a wasted vote.”

But, one voter insisted the country “needed something bigger and better than Nigel Farage”. 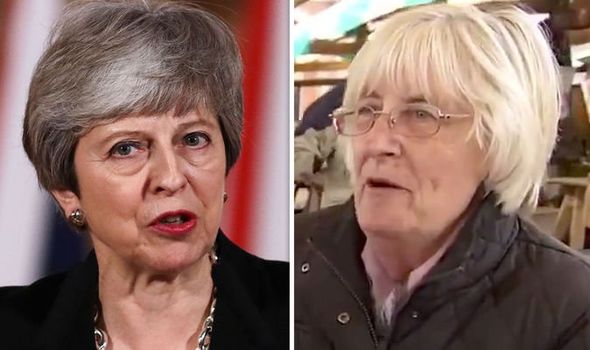 I think all the politicians have let us all down, from all parties

The latest YouGov survey of voter intentions for the European elections puts the Tories trailing in fifth place behind Mr Farage’s eurosceptic Party, Labour, Liberal Democrats and the Green Party.

The Brexit Party received over a third of all votes, polling at 34 percent, Labour has 16 percent, Lib Dem’s 15 percent, Green Party 11 percent and Conservatives on just 10 percent.

The YouGov survey took place between May 8 and May 9 and quizzed 2,212 adults in the UK on their voting intentions in the European Parliamentary elections.

Labour Party leader Jeremy Corbyn has urged voters to back Labour in next week’s European election to “challenge the voices in the far right” across Europe.

Writing in the British Asian newspaper Eastern Eye, Mr Corbyn said: “The upcoming EU election has become a target and a battleground for far-right voices. The discontent over the Tories’ handling over Brexit has left our country in crisis, and jobs and industries at risk.

“Individuals and parties that are known to spew hatred and cause division are now using this vacuum of leadership caused by the Government to win support in the EU elections next week. We need real solutions, not scapegoats.”

It comes as the Prime Minister has launched a last-ditch effort to try to get her Brexit withdrawal agreement through the House of Commons, with the plan already having been defeated by MPs on three occasions.

Mrs May will bring the Withdrawal Agreement Bill (WAB), which implements the departure terms, to parliament for a vote in the week beginning June 3 just as US President Donald Trump begins a state visit to Britain.